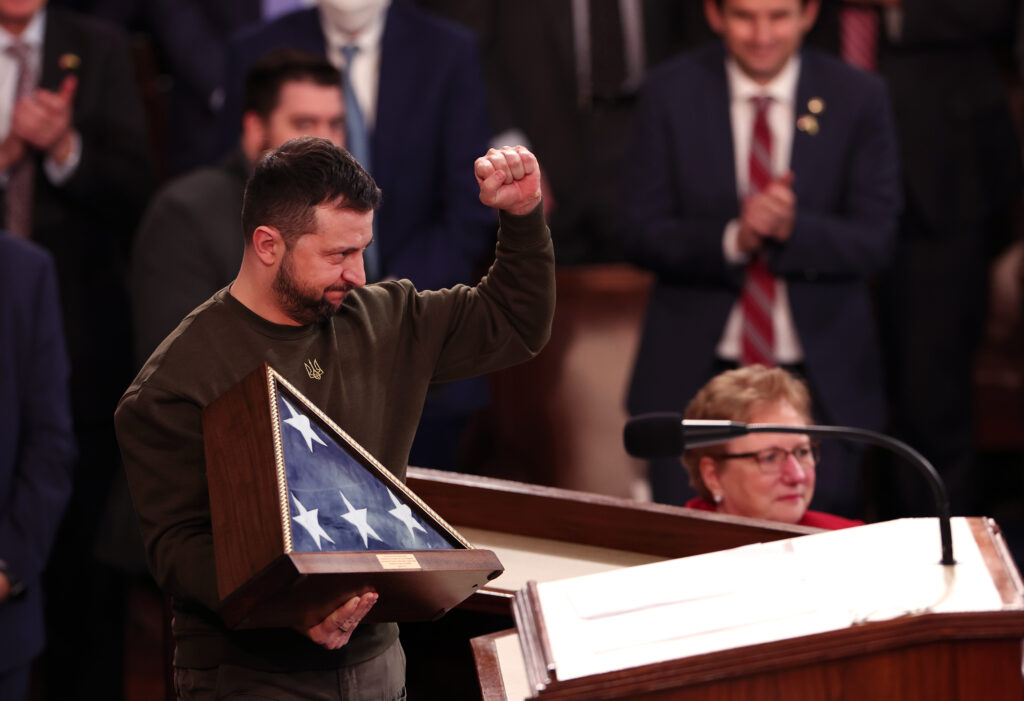 President of Ukraine Volodymyr Zelensky holds an American flag gifted to him by U.S. Speaker of the House Nancy Pelosi (D-CA) as he addresses a joint meeting of Congress in the House Chamber of the U.S. Capitol Wednesday In his first known trip outside of Ukraine since Russia invaded, Zelenskyy met with U.S. President Joe Biden and outlined Ukraine’s request for continued military aid. Win McNamee/Getty Images

The historic and surprise visit to the United States by the wartime Ukrainian leader marked his first known trip outside Ukraine’s borders since Russia launched a full-scale invasion in February.

“I know that everything depends on us, on Ukrainian armed forces. Yet so much depends on the world. So much in the world depends on you,” he told lawmakers.

At one point Zelenskyy referred to a Dec. 8, 1941 speech by President Franklin D. Roosevelt when Roosevelt asked Congress to declare a state of war between the United States and Japan and said the American people would “win through to absolute victory.” Zelenskyy said:  “The Ukrainian people will win, too, absolutely.”

Zelenskyy’s appearance in front of the joint session of Congress came as Ukrainians marked the 300th day of the conflict and as lawmakers were on the cusp of approving a year-end omnibus spending package that is expected to include another $45 billion in aid for his country.

Referring to Russian forces as “terrorists” attacking sovereign land, Zelenskyy told Congress that its “bicameral and bipartisan” support “is not charity. It’s an investment in global security.”

As lawmakers race to pass the massive funding bill before a Friday deadline, some House Republicans remain highly critical of sending another round of aid to the war-torn country.  “I’m in DC but I won’t be attending the speech of the Ukrainian lobbyist,” tweeted Rep. Thomas Massie, a Kentucky Republican.

Zelenskyy closed his address by presenting to House Speaker Nancy Pelosi and Vice President Kamala Harris a Ukrainian flag signed by frontline soldiers fighting in the eastern city of Bakhmut.

“They asked me to bring this flag to you, to the U.S. Congress, to members of the House of Representatives and to senators whose decisions can save millions of people,” Zelenskyy said. “Let these decisions be taken, let this flag stay with you ladies and gentlemen. This flag is a symbol of our victory in this war. We stand, we fight and we will win because we are united. Ukraine, America and the entire free world.”

Lawmakers stood and applauded numerous times throughout his address. A small group of members unfurled and raised their own Ukrainian flag as Zelenskyy entered the chamber.

Majority Leader Chuck Schumer, of New York, said Zelenskyy “delivered a powerful, sobering, and moving address to Congress as his country fights for the right to exist.”

“I spoke with the President about my family’s ancestry in Chorkaiv, Ukraine and my deep personal connection to his country. I told him that where Winston Churchill stood generations ago, so too does he tonight not just as a president but as an ambassador for freedom itself,” Schumer said in a statement.

The leader’s one-day trip to Washington began with an afternoon visit to the White House where Zelenskyy joined President Joe Biden for a joint press conference, where their friendly tone was punctuated by humor.

Biden declared that Ukraine would “never stand alone,” and both leaders signaled that the conflict may not have an imminent end.

“We understand in our bones that Ukraine’s fight is part of something much bigger,” Biden said. “The American people know that if we stand by in the face of such blatant attacks on liberty and democracy, and the core principles of sovereignty and territorial integrity, the world would surely face worse consequences.”

The visit also coincided with the Pentagon announcement of $1.85 billion in additional weapons and security assistance, including a coveted Patriot air defense system that the U.S. showed reluctance to hand over in the earlier months of the fight.

When pressed by a reporter on why the U.S. did not move quicker on deploying the sophisticated defense system, Biden emphasized the role of NATO and allied European nations, and replied “we’re looking to do more. We provided hundreds of advanced artillery systems from dozens of countries.”

The latest tranche of weapons and artillery assistance — the 28th from Department of Defense inventories since August 2021 — will also include ammunition for High Mobility Artillery Rocket Systems, or HIMARS,  armored vehicles, grenade launchers and small artillery.

U.S. security assistance to Ukraine now stands at $21.9 billion since the beginning of the Biden administration.

“We fight for our common victory against this tyranny,” Zelenskyy said as he briefly spoke in English. “I really want to win together … Not want, sorry, I’m sure.”

The Ukrainian leader, dressed in his signature army green often seen during his frequent wartime video addresses, said he wanted to travel to the United States to “forward words of thanks to the people of America, people who do so much for Ukraine.”

The administration also announced on Wednesday a $374 million package from the U.S. Agency for International Development for food and cash assistance as Ukrainians face brutal winter temperatures and in some areas fuel shortages and electricity outages as Russia targets heating and electrical systems as temperatures plunge.

Zelenskyy arrived at the White House just after 2 p.m. Eastern and delivered opening remarks alongside Biden in the Oval Office before a closed-door bilateral meeting.

Prior to the meeting, Zelenskyy presented Biden with a military merit medal from a captain fighting in Bakhmut, a strategic location in Ukraine’s Donetsk region that has seen five months of intense fighting and shelling.

The post Zelenskyy pledges a fight for ‘common victory’ against Russian tyranny in visit to U.S. appeared first on Georgia Recorder.