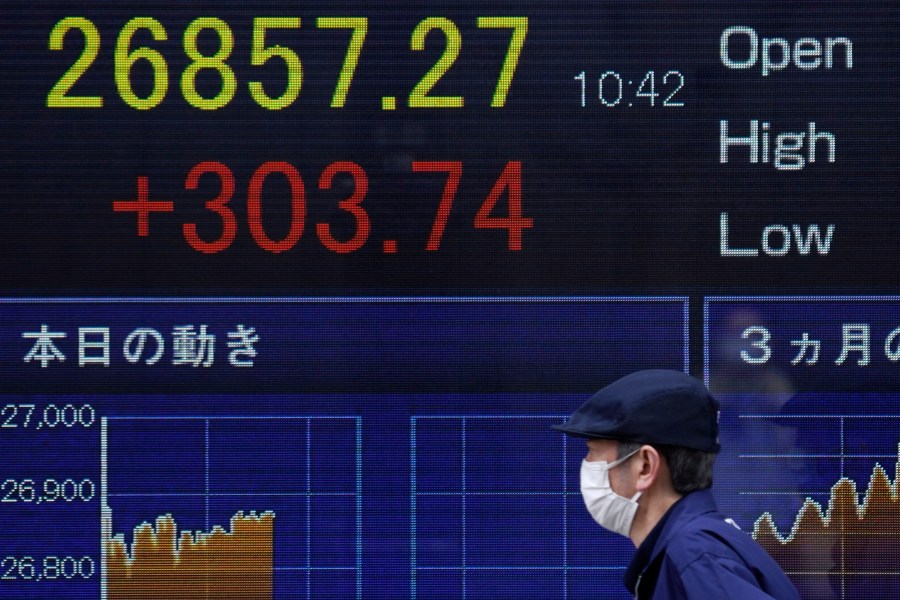 BANGKOK (AP) — Shares were higher Monday in Europe and in Asia, where most markets were closed for the Lunar New Year holiday.

In Asia, Tokyo’s Nikkei 225 index added 1.3% to 26,906.04 as investors shrugged off Finance Minister Shunichi Suzuki’s comments that Japan is facing an “unprecedentedly severe” financial situation after spending heavily to counter the pandemic and other troubles.

“Finances are the cornerstone of a country’s trust,” Suzuki told lawmakers in parliament. “We must secure fiscal space under normal circumstances to safeguard trust in Japan and people’s livelihoods in times of crisis.”

Japan’s national debt, already more than twice its gross domestic product, has grown further as the government has failed for a decade to attain its targets for balancing the budget.

But , adjusting to a variety of factors, “Investors have become somewhat wary about the ongoing weakness in the economic data, and it is clear that they are no longer treating the bad news like good news,” Naeem Aslam of Avatrade.com said in a commentary.

“So going into this week which is full of firecrackers in terms of economic data and earnings, the focus will be if we are going to see the U.S. equity markets continue to march higher,” Aslam said.

In other trading Monday, U.S. benchmark crude oil gave up 9 cents to $81.55 per barrel in electronic trading on the New York Mercantile Exchange. It gained $1.03 to $81.64 per barrel on Friday.

Brent crude, the price benchmark for international trading, declined 17 cents to $87.46 per barrel.

Despite the gains, the benchmark index still ended with its first weekly loss in the last three.

Technology and communication services stocks powered much of the gains as investors cheered another big quarterly surge in Netflix’s subscribers.

Gains for tech-oriented stocks accounted for a big share of the S&P 500’s rally Friday. Google’s parent company, Alphabet said it was cutting costs by laying off 12,000 workers. Its shares jumped 5.3%.

Netflix reported a surge in its number of subscribers and saw its shares leap 8.5%.

Worries that the economy may not be able to avoid a scarring recession overhang the markets, though data showing inflation is cooling suggest the Federal Reserve’s interest rate hikes last year have begun to make their way through the system.

On Friday, Fed Gov. Christopher Waller said he favors just a quarter-point hike on Feb. 1, when the central bank gives its next interest rate policy update. Waller also said that rates are already high enough to be slowing the economy.