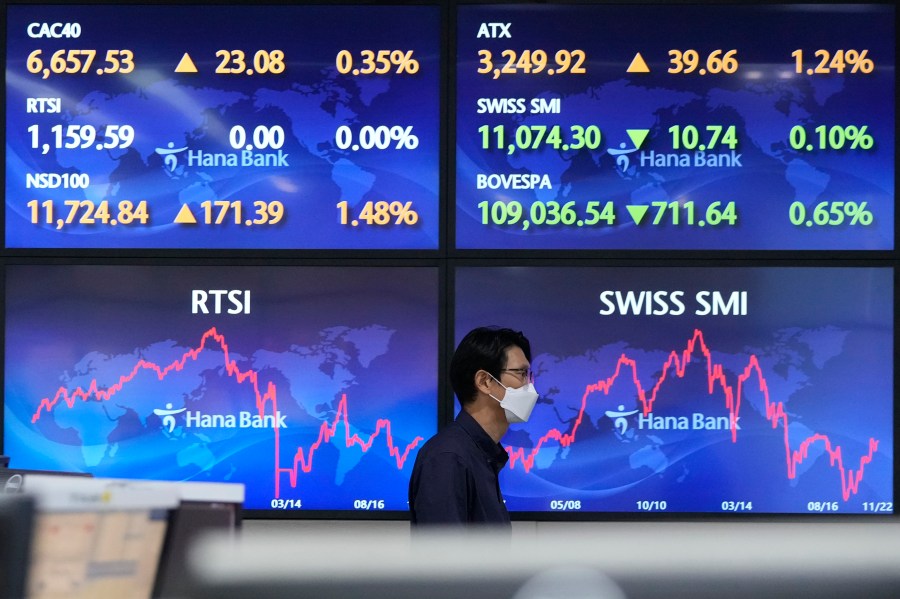 BANGKOK (AP) — World shares have advanced ahead of Wednesday’s release of minutes from the Federal Reserve’s last policy meeting.

Benchmarks rose in London, Paris, Hong Kong and Shanghai. Markets were closed in Japan for a holiday.

The Federal Reserve minutes could give investors more insight into the U.S. central bank’s decision-making process. Wall Street has been hoping that the central bank might ease up on its aggressive rate increases. Its benchmark rate currently stands at 3.75% to 4%, up from close to zero in March.

The Fed has warned that it may have to ultimately raise rates to previously unanticipated levels to cool the hottest inflation in decades. That raises the risk it could go too far in slowing economic growth and bring on a recession.

“Ahead of the release of Fed minutes, much focus has been placed on a slowing down on the pace of rate hikes,” Mizuho Bank said in a commentary. “Nonetheless, even if a Fed rate hike step down might be imminent, the picture on risk/growth outlook is far from certain.”

Traders seemed undaunted by signs COVID outbreaks in China are worsening, potentially adding to disruptions for manufacturing and supply chains and helping to keep inflation at decades-high levels.

Employees at the world’s biggest Apple iPhone factory were beaten and detained in protests over contract disputes amid anti-virus controls, according to witnesses and videos on social media Wednesday, as tensions mount over Beijing’s severe coronavirus strategy.

New Zealand’s share benchmark fell 0.9% after the Reserve Bank of New Zealand raised its benchmark rate by three-quarters of a point to 4.25%, striving to rein in inflation that is now at 7.2%.

It’s the first time the bank has raised rates by more than a half-point since introducing the Official Cash Rate in 1999. The new rate is the highest in New Zealand since early 2009.

Markets were closed in Japan for a holiday.

Apart from the Fed minutes, investors have very little other news to review this week, but several retailers and technology companies are closing out the latest round of corporate earnings with their financial results.

In other trading Wednesday, U.S. benchmark crude gained 70 cents to $81.65 per gallon in electronic trading on the New York Mercantile Exchange. It added 91 cents to $80.95 per gallon on Tuesday.

Brent crude, the standard for pricing international oil for trading, rose 79 cents to $88.49 per gallon.