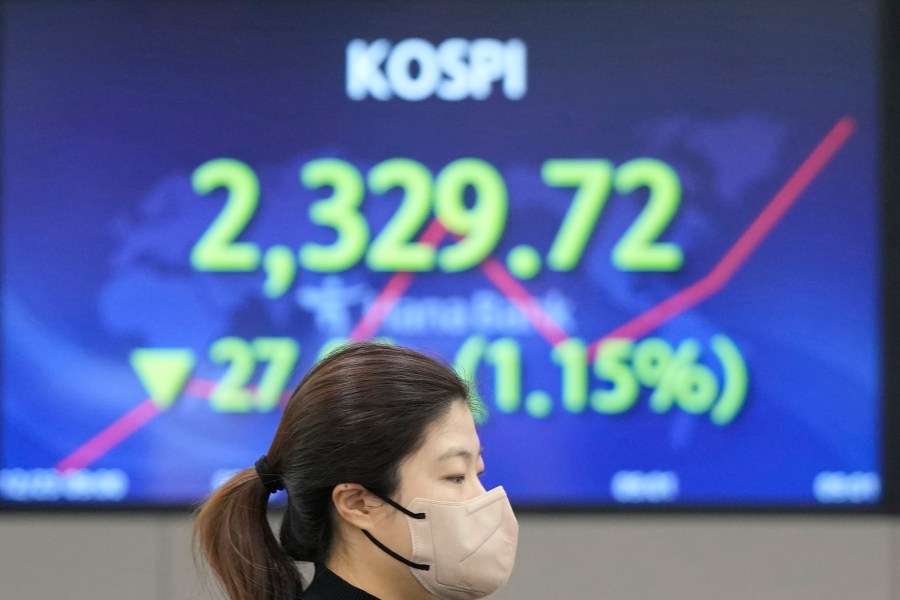 BANGKOK (AP) — Shares rose in Europe on Friday after a retreat in Asia ahead of updates on U.S. consumer spending and durable goods orders.

Benchmarks climbed in London and Paris but fell in Hong Kong, Tokyo and Seoul. Oil prices surged more than $1 a barrel.

Japan reported its core inflation rate, excluding volatile fresh foods, rose to 3.7% in November, the highest level since 1981, as surging costs for oil and other commodities added to upward price pressures in the world’s third-largest economy.

While price increases are much more modest in Japan than in the U.S. and most major European and emerging economies, they add to pressure on the Bank of Japan to adjust longstanding policies that have kept interest rates ultra-low to spur growth. For Japan, deflation — falling prices — rather than inflation has been the key concern for most of the past few decades. Recession in coming months remains a greater concern, economists say.

“Inflation edged up in November and will peak at around 4% around the turn of the year, but we expect it to fall back below the Bank of Japan’s 2% target by mid-2023,” Capital Economics economist Marcel Thieliant said in a report.

The Fed has already hiked its key overnight rate to its highest level in 15 years. It began the year at a record low of near zero. Many economists and investors expect a recession to hit the U.S. economy in 2023.

Good economic data should be positive for markets when recession may be looming, but the reports Thursday suggested the Federal Reserve may need to keep hiking interest rates and keep them high to curb inflation.

On Friday, the U.S. government will report on personal income and spending and on durable goods orders, among other data.

The Fed is particularly worried about a still-strong job market giving more oxygen to inflation, which has eased a bit in recent months but is still near the highest level in decades. A report Thursday said employers laid off fewer workers last week than expected. Another report showed that the broad U.S. economy expanded at a more robust pace during the summer than earlier estimated.

The S&P 500 fell 1.4% on Thursday after having been down as much as 2.9% earlier in the day. The pullback brings Wall Street’s main measure of health back to a loss of nearly 20% for the year.

Trading has been topsy-turvy across Wall Street recently as reports paint a mixed portrait of the economy.

High-growth technology stocks have taken some of the year’s worst hits because they’re seen as some of the most vulnerable to rising rates.

Electric vehicle maker Tesla is smarting from rising interest rates and with issues specific to itself and its CEO, Elon Musk. It tumbled 8.9%, bringing its loss for the year to around 64%. It’s taking the rare step of offering discounts on its two top-selling models through year’s end, an indication demand is slowing.

Worries are rising broadly about corporate profits across industries, which are contending with the weight of higher interest rates, still-high inflation and rising costs rise due to payroll and other expenses. Weaker corporate profits could further erode support for stocks, after profits strengthened through much of 2022.

Meanwhile, the housing industry and other areas of the economy whose fortunes are closely tied to low interest rates are suffering.

In other trading Friday, U.S. benchmark crude oil rose $1.50 to $78.99 per barrel in electronic trading on the New York Mercantile Exchange. It fell 80 cents to $77.49 per barrel on Thursday.

Brent crude oil, the pricing basis for international trading, advanced $1.43 to $83.10 per barrel.