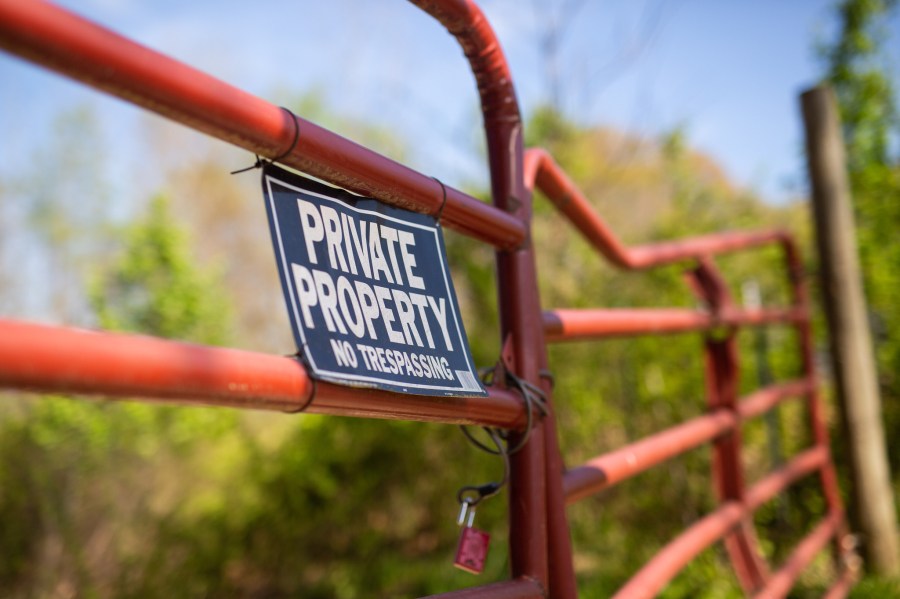 CAMDEN, Tenn. (WKRN) — If you found cameras on your property, odds are, you’d be a little surprised.

“It was right here,” Camden resident, Hunter Hollingsworth, said while pointing at a tree on his property. “Out of those two little scrub oaks, it was on the one on the right, kind of right where that hole is right in there. Ten feet up or so.”


Read the latest from the TN State Capitol Newsroom

Hollingsworth has lived in Camden his entire life—its population is less than 4,000. Hunting and fishing aren’t just hobbies in these parts—for many, it’s a religion.

“Since I was in pull-ups,” Hollingsworth said when asked how long he’s been hunting.

In a story first extensively reported by Field & Stream magazine, Hollingsworth was driving on his hunting property one morning in January 2018 when he noticed something odd in one of the trees.

“As we came around the curve, my headlights caught something shining in the tree. I thought it was a [rac]coon or a possum or some animal in a tree,” he said. “So, I grabbed a flashlight out of my truck and shined the tree to see what it was, and I saw that it was a camera with an antenna.”

He took the camera down and found pictures of Tennessee Wildlife Resources Agency (TWRA) and U.S. Fish and Wildlife Service agents on them — as well as himself.

Hollingsworth put the camera in his gun safe and essentially forgot about it until that fall, which is when law enforcement came knocking with a search warrant, saying he stole the camera.

“They had on bulletproof vests, first aid kits, extra magazines, like they were a SWAT team to come get this camera that I ‘stole’ that was on my property illegally,” Hollingsworth said. “They searched my whole house.”

Officers handcuffed Hollingsworth but he didn’t go to jail or receive a citation that day.

Months later, U.S. Fish and Wildlife charged him with several violations, including illegal baiting and theft of government property. Hollingsworth took a plea deal to drop most of the charges, which resulted in the suspension of his license for three years.

In response, he filed a lawsuit challenging the constitutionality of the cameras. A federal court threw the lawsuit out. With legal fees adding up, Hollingsworth was running out of options.

“You’re playing against a loaded deck to start with,” he said. “Your average person doesn’t have the funds or the time to fight them because they’ll just drag you out and run you out of money.”

That’s when the Institute for Justice, a non-profit, public law firm stepped in.

As Hollingsworth came to find out, he wasn’t the only one the TWRA was watching.

Through word of mouth, Hollingsworth found that his neighbor, Terry Rainwaters, also found two unwanted cameras on his property.

“One was pointed at my shop here in my house,” Rainwaters said.

Note: The TWRA said it couldn’t comment specifically on this case, only on the procedures and rules it has in place. To read the first part of our three-part series, click this link.

His attorney at the Institute for Justice, Josh Windham, said, at the time, Rainwaters had a tenant renting out a home on his property.

The Tennessee Wildlife Resources Agency (TWRA) and U.S. Fish & Wildlife charged Rainwaters’s son and some friends with illegal baiting after an incident in a TWRA-owned area back in October 2017. The charge was called Operation Bird Dog.

“There’s one guy in particular, Mr. Kevin Hoofman, he puts in off the highway in Sandy River Bottom on a boat,” Rainwaters said. “Floats down, gets out on foot, and walks all over this private property that’s gate-locked.”

News 2 asked the TWRA if officers were allowed to do that. The agency said it does have a boating law enforcement team that can go from boats to land.

“That officer would be able to step out onto that easement, that public property,” TWRA Director of Communications Emily Buck said. “But, it typically does stop at some point, they would not be able to go past that into the private property.”

News 2 followed up with a question on if Officer Hoofman was on that team. “I’m not going to speak to him specifically,” Buck said.

Rainwaters said he’s never been charged with a wildlife violation in his life.

But as it turns out, at the time, the TWRA and U.S. Fish & Wildlife were technically allowed to install these cameras because of something called the Open Fields Doctrine.

The Fourth Amendment states, “The right of the people to be secure in their persons, houses, papers, and effects, against unreasonable searches and seizures, shall not be violated.”

The doctrine clarifies in a 1924 Supreme Court case, those protections are, “not extended to the open fields.”

“Our law enforcement officers, they follow the letter of the law, so they were doing what they were allowed to do,” Buck said.

However, the Open Fields Doctrine dictates federal law. Tennessee has a state constitution that changes one word.

“They list persons, houses, papers, and possessions, instead of effects,” Wimer said. “You can possess your land, and people do that all across Tennessee every day.”

That was the basis of a successful lawsuit Rainwaters and Hollingsworth pressed against the TWRA, asking for a grand total of $1.

But for the pair, it wasn’t about the money.

“It’s not about the dollar, it’s about the rights that have been restored to property owners across Tennessee,” Hollingsworth said.

The Benton County Circuit Court ruled in the pair’s favor in what many see as a win for landowners. Of course, the TWRA contended its job just got a whole lot harder.

“We do now require a search license to be able to go on private property,” TWRA Director of Communications Emily Buck said. “It can be difficult, for example, to be able to get a search warrant, a lot of times, if we’re dealing with a poaching or a trespassing issue at night.”

The importance of the fact that the TWRA now has to obtain a search warrant before entering private property cannot be understated. Wildlife crime, the agency argued, will go up.

“Our issues are often very time-sensitive, so if someone is hunting game illegally, they’re going to be gone by the time we obtain that search warrant,” Buck said. “So, there’s really nothing we can do about it at that point.”

It’s a complex issue. At some level, people want the agency to be able to stop poaching and other wildlife crimes.

Take Hollingsworth, for example. Critics argue there was a reason law enforcement was watching him. If you ask him, he’ll admit he’s made mistakes after being charged with poaching violations in the past.

“I have made mistakes,” he said. “But good people make bad decisions.”

Physically watching someone commit an illegal act is one thing, but Hollingsworth and Rainwaters said installing cameras went too far.

“Cameras are absolutely over the line because you’re being watched 24 hours a day, seven days a week,” Hollingsworth said. “You’re being seen doing things that could be private.”

In Rainwaters’s case, he said he’s never committed a wildlife violation in his life, even if his son has.

“I have a clean record,” Rainwaters said. “I haven’t been doing anything illegal, so why should they be spying on my land?”

Their attorneys argue that other law enforcement can’t enter without a search warrant, so why should this be any different?

“People can commit all sorts of crimes with their property. For example, in your house, you can commit cybercrimes, you can deal drugs,” Institute for Justice attorney Josh Windham said.
“Nobody thinks that just because it would be easier if police could go into your house whenever they want, all of a sudden, they should be able to do that.”

The attorney argues we have a Fourth Amendment, and there’s a reason for that.

“The Tennessee Constitution was designed so that law enforcement have to go through certain procedures to do their jobs,” Windham said. “We don’t live in a country and we don’t live in state in Tennessee where police just get to do whatever they want because it’s efficient or it would make their lives easier.”

Prior to the camera installations, Hollingsworth pleaded guilty to hunting violations and had his hunting license suspended three years.

Thanks for signing up!

Watch for us in your inbox.

Though he admits, he’s also nervous.

“As upset as TWRA and the feds are, I’m afraid they’ll try to frame me for something that I didn’t do,” Hollingsworth said.

For its part, the TWRA said it couldn’t comment on the case – that’s because it appealed the ruling. But until it’s heard, because of the outcome, the agency now must obtain a search warrant prior to searching private property.

In the meantime, it has some relationships to mend, and it knows that.

But, it’s certainly going to take some time. When it comes to Rainwaters and Hollingsworth, that trust and respect may never return.

“I don’t trust them after the camera and stuff,” Hollingsworth said. “There’s a lot of corruption.”

“They’re way overstepping their boundaries,” Rainwaters said. “They need to be put in their place.”

Hollingsworth said he loves wildlife and feels guilty over his past mistakes; it’s not something he’s proud of. But he believes it’s helped him become a better person and a better hunter. When asked if he had anything to say to the TWRA, he shrugged.

“I’m all for protecting wildlife and preserving wildlife for the next generation,” he said. “But y’all will have to find a better way to do it.”