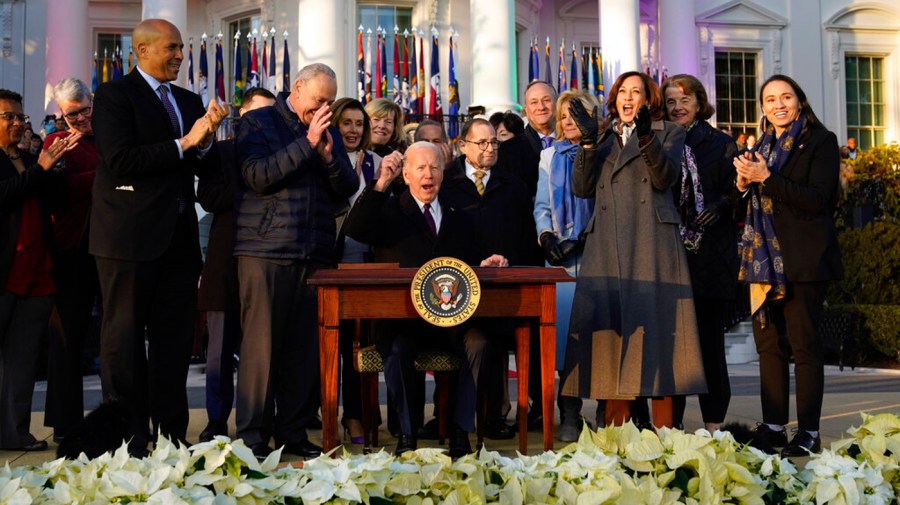 The Biden administration lit up the south portico of the White House in rainbow colors on Tuesday evening after the president signed the Respect for Marriage Act into law earlier in the day.

President Biden signed the legislation, which provides federal protections for same-sex marriage, during a celebratory event on the South Lawn with more than 2,000 attendees.

“The road for the moment has been long, but those who believe in equality and justice, you never gave up,” Biden said at the event.

The White House projected the lights during the ceremony but the rainbow colors became more brilliant as the sun set hours later.

During the Obama administration, the White House lit up the north side of the building with rainbow colors following the Supreme Court’s landmark Obergefell v. Hodges ruling in 2015 that guaranteed a constitutional right to same-sex marriage.

The push to pass the Respect for Marriage Act, which was ultimately supported by Democrats as well as 39 House Republicans and 12 Senate Republicans, came in response to Justice Clarence Thomas calling on justices to revisit the Obergefell ruling in a concurring opinion to the high court’s overturning of abortion protections.

The law requires the federal government and states to recognize legally performed marriages in other states and repeals the Defense of Marriage Act, a 1996 bill that recognized marriage as “only a legal union between one man and one woman as husband and wife.”

During Tuesday’s event, Biden and Speaker Nancy Pelosi (D-Calif.) called on lawmakers to pass the Equality Act, which would cement protections against anti-LGBTQ discrimination.

“When a person can be married in the morning and thrown out of a restaurant for being gay in the afternoon, this is still wrong. Wrong,” Biden said.