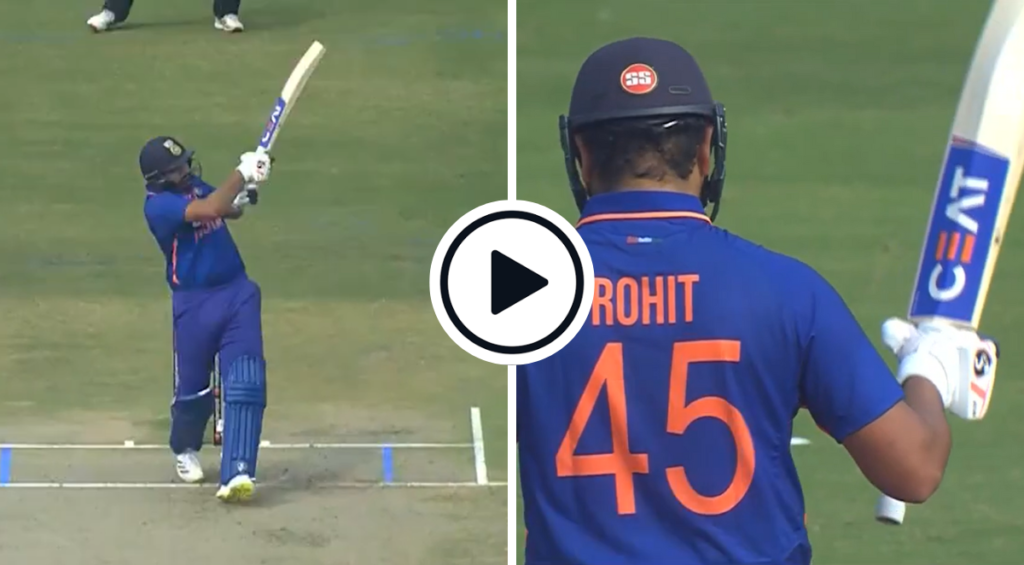 Watch: In the third ODI against New Zealand in Indore, Rohit Sharma scored his 30th ODI hundred and his first since the global pandemic lockdown.

Rohit had last scored a century in the format on January 19, 2020, against Australia in Bengaluru. Subsequent injuries and the BCCI’s efforts to manage his workload across formats had restricted his ODI appearances to 16 matches.

Since the lockdown, Rohit has adopted a different batting approach as well. While his strike rate shot up to 103, his average dropped to 40.42 in this phase. It also resulted in a 1,101 day stretch without a hundred in the format.

However, Rohit got up and running immediately in the final match of the current series against New Zealand, after India were put in to bat at the Holkar Cricket Stadium. He found the boundary twice in the third over, which was bowled by Jacob Duffy. In Duffy’s next over he hit two sixes, the first hooked over long leg and the second straight down the ground.

New Zealand persisted with Duffy, and Rohit again cut loose in the 10th over of the innings, smashing a four and two sixes to race to 39. Two more sixes followed in the 14th over, off Mitchell Santner: the first of these took him to fifty off 43 balls.

Rohit continued to attack, smashing Daryl Mitchell for four fours in six balls. A subsequent six, again off Mitchell, took him to 86 – though he had mistimed the shot completely, and the ball crossed the ropes only because of the small dimensions of the ground.

Four balls later, he steered Mitchell for four to race into the nineties. Thereafter, he slowed down, taking 15 balls for the nine runs – none of them through boundaries – taking his time to reach the long-awaited milestone. Finally, he got to his hundred with a single from a short-ish delivery from Blair Tickner.

But just two balls later, a ball from Michael Bracewell kept low and bowled Rohit for an 85-ball 101. This was the 30th ODI hundred for Rohit and his 42nd international century. He now shares the third place on the all-time ODI list, along with Ricky Ponting. Only Sachin Tendulkar (49) and Virat Kohli (46) have more hundreds in the format.

India finished their innings on 385-9, Shubman Gill having scored another century and Hardik Pandya contributing a 38 ball 54.