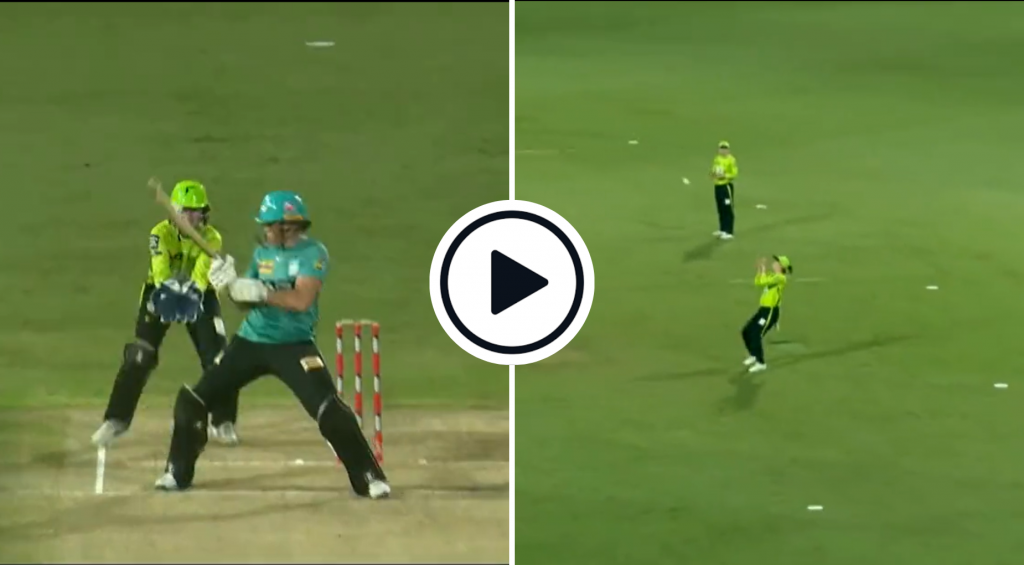 Watch: Grace Harris of Brisbane Heat was caught in bizarre fashion against  Sydney Thunder in a Women’s Big Bash League match at the Allan Border Field in Brisbane.

Sydney Thunder, sixth in the points table, posted 139-7 after opting to bat against second-placed Brisbane Heat. Phoebe Litchfield starred with a 38-ball 50, while Amy Jones got 24 in 21 balls and captain Rachael Haynes 38 in 30. For the Heat, Jess Jonassen picked 2-20 and Nicola Hancock 2-25.

It was not a huge target, and Brisbane openers Georgia Redmayne (33 in 36) and Danni Wyatt (18 in 18) began cautiously. Lea Tahuhu (3-31) broke through in seventh over, having Wyatt caught behind by Tahlia Wilson. Harris joined Redmayne, and the pair took the score to 51 after nine overs.

Sammy-Jo Johnson came to bowl the 10th over. The first ball was a full toss outside off-stump, but Harris was already in position to play the scoop over wicketkeeper Wilson. To her credit, Harris middled the shot, but hit Wilson’s helmet en route. The ball ricocheted on impact and flew in a direction almost perpendicular to the trajectory of the ball to backward point, where Jones gleefully accepted the catch.

Harris looked at the umpire, perhaps with hope. Perhaps there was some merit in that – the ball was high enough to sow the seeds of doubt that it should be a no ball – but to no avail. She had to walk back.

The incident was reminiscent of Ben Duckett’s dismissal in the 2022 T20 Blast. Playing for Nottinghamshire, Duckett tried to play the scoop off Tom Hartley, but the ball ricocheted off Lancashire wicketkeeper Dane Vilas’ helmet. In that case, however, Vilas himself took the catch on rebound.

Have you ever seen anything like this?! Tahlia Wilson with the perfect header into the safe hands of Amy Jones