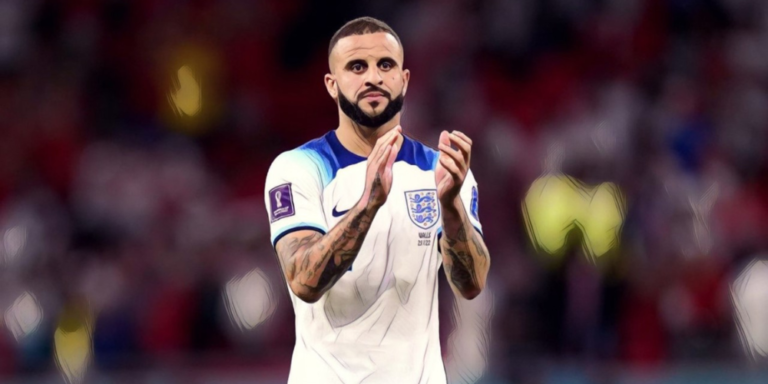 Kyle Walker has discussed his upcoming battle with Kylian Mbappe as England prepare to take on France in the World Cup quarter-finals.

England face the world champions for a place in the last four this weekend, with Mbappe viewed as the dangerman for Les Bleus. The 23-year-old has been in electric form during the World Cup so far and leads the race for the Golden Boot with five goals.

Walker’s duel with the explosive forward is set to be a key battle in deciding the clash, but the England right-back insists that the Three Lions cannot afford to overly concentrate on Mbappe, describing it as a ‘do or die’ fixture.

“The game is not England versus Mbappe,” Walker said. “The game is England versus France. We respect that he’s a good player and in good form at the minute, but I’m not going to roll out the red carpet for him and tell him to go and score.

“I’m representing my country at a quarter-final of a World Cup. It’s do or die really. If we lose, we go home. He’s not going to stand in my way of, hopefully, winning a World Cup for my country.”

Meanwhile, fellow full-back Luke Shaw discussed England’s route to the last eight and believes Gareth Southgate’s side must raise their level again against France. The full-back has called on England to take the game to France with a front-footed approach on Saturday.

“The results we’ve had, the goals we’ve scored, and I think even at times we haven’t been anywhere near our best,” Shaw told talkSPORT.

“But we’re still reaching high numbers in the goals scored, the chances we’re creating. So I think that’s the positive thing that there’s obviously more from us still that we can do and reach another level.

“But at the moment the level’s good, but like I said we need to step up another level on Saturday night.”

“We need to impose ourselves I think, especially after the way we’ve been over the last few games. I think the attacking approach when we do it at times is world class and can break down any team.

“So I think we need to be on the front foot, we don’t want to go into the game passive and sit back and go for that.

Read – Assessing each of the World Cup quarter-finalists