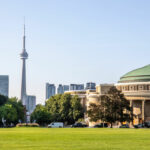 The University of Toronto (U of T) has been selected as one of nine schools globally to receive funding from ex-Google CEO Eric Schmidt’s new, $148 million USD program focused on enabling the use of artificial intelligence (AI) in research.

Through the Eric and Wendy Schmidt AI in Science Postdoctoral Fellowship, Schmidt Futures aims to support the work of researchers applying AI to research in science, technology, engineering, and mathematics (STEM).

U of T will host 10 fellows during the first year of the initiative, and 20 annually thereafter.

Founded by Eric Schmidt, the former CEO and executive chairman of Google and Alphabet, and his spouse, Wendy Schmidt, Schmidt Futures is a philanthropic initiatitive focused on helping talented people “solve hard problems in science and society.” In total, Schmidt Futures has committed $400 million towards various AI initiatives.

The program will fund nearly 300 postdoctoral fellows each year over six years. U of T will host 10 fellows during the first year of the initiative, and 20 annually thereafter. Of the nine schools chosen by Schmidt Futures, U of T was the only Canadian university. Schmidt Futures and U of T did not disclose exactly how much funding the university is set to receive through the program as part of its selection.

“As the home of deep learning, the University of Toronto is proud to partner with Schmidt Futures on this forward-looking program, which will accelerate humanity’s ability to meet some of the most important challenges of our time,” said U of T president Meric Gertler. “The Schmidt AI in Science Postdocs program provides tremendous opportunities for the emerging generation of STEM researchers.”

Through the program, Schmidt Futures plans to facilitate networking and research collaborations between participating universities, workshops, conferences, lectures, and training on how to apply AI, while also enabling fellows to expand the scope of their own research and establish careers as “AI-fluent scientists.”

Applications to join the first cohort and become an Eric and Wendy Schmidt AI in Science Postdoctoral Fellow at the U of T are currently open and close November 21.