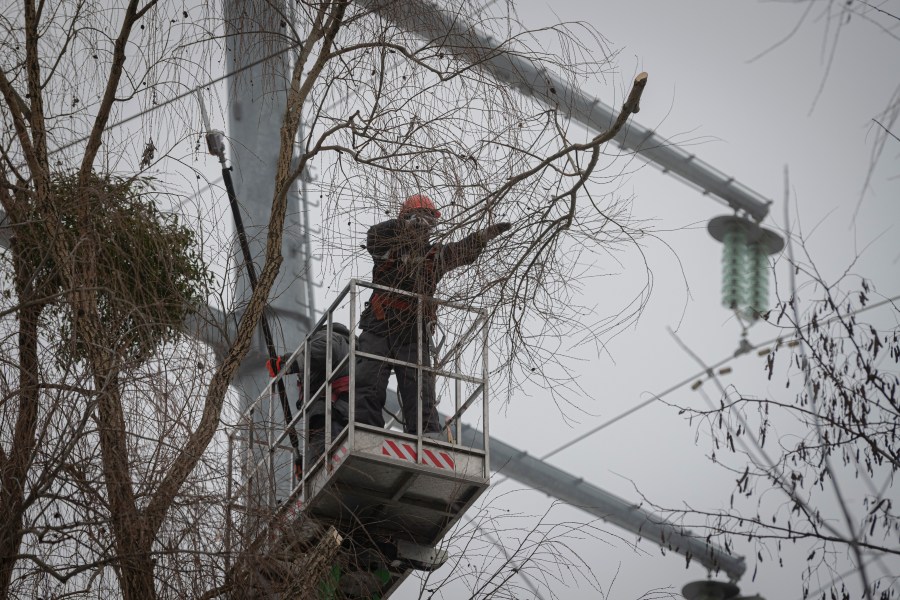 KYIV, Ukraine (AP) — Over the grinding wail of a chainsaw pruning trees, Oleh Braharnyk recalls how his crew sprang into action in Kyiv a week earlier to repair power lines downed by Russian missiles and keep electricity flowing to his beleaguered fellow Ukrainians.

Braharnyk, an electric company foreman, knows the stakes: Like many others in Ukraine, his family has dealt with daily power outages caused by Russian strikes.

“We, too, sit in the dark,” he says, acknowledging that his home gets power for only about half of each day.

In recent months, Russia has rained missiles on Ukraine to try to take out power grid equipment and facilities that keep lights on, space heaters warm and computers running. It’s part of Moscow’s strategy to cripple the country’s infrastructure and freeze Ukraine into submission this winter.

Braharnyk’s crew is one of many from energy company DTEK that moves swiftly in Kyiv – occasionally under artillery and rocket fire – to keep the city ticking. Colleagues across Ukraine do the same.

From President Volodymyr Zelenskyy on down, Ukrainian leaders have warned that gas systems, water mains and power stations have become a new front as the war nears the 10-month mark.

About half of Ukraine’s energy supply network is still damaged following widespread attacks on Nov. 23, when DTEK declared “the power system failed.”

During that barrage, six of the company’s thermal power plants were shut down, and as many as 70% of residents in Ukraine’s capital lost power. The plants were brought back online within 24 hours, although power cuts affect about 30% of Kyiv’s residents during the day, dropping as low as 20% at night, DTEK spokeswoman Antonina Antosha said.

DTEK, which works closely with Ukrainian energy company NEC Ukrenergo, says Russian forces have attacked its facilities 17 times since early October, including twice on Monday alone. The company has reported the deaths of more than 106 employees since Russia invaded Ukraine in late February, the vast majority of them members of the military, but says 14 were killed while either off-duty or working.

Three Ukrainian energy workers were killed and 24 injured in the past week, DTEK said.

On Thursday, Braharnyk’s crew had little more to worry about than freezing temperatures and piles of snow as they pared back branches near overhead electricity lines that power homes and businesses on much of the left bank of the Dnieper River that cuts through the capital.

That doesn’t diminish their constant state of alert. When the missiles started dropping mid-afternoon on Nov. 23, the crew rushed to an unspecified emergency site, assessed the damage, and quickly determined what repairs needed to done within a span of a few hours. A second “brigade” was then called in to do the actual repair work.

“Three or four lines were snapped,” and it required several hours of work to install new ones, Braharnyk said.

The crews can’t just rush in. In theory, but not always in practice, de-mining experts are expected to arrive first and give the all-clear that there’s no danger from unexploded ordnance. Then, clean-up crews, when needed, clear away debris and fragments from downed lines and blast destruction so trucks and heavy equipment can get through to complete the repairs.

The infrastructure-targeted strikes aren’t as perilous as the attacks of the opening phase of the war, when Russian forces advanced to the outskirts of Kyiv and some neighborhoods of the capital before being pushed back. At that time, repair work was done under fire.

“That was much worse,” Braharnyk recalled. “These days, it’s better because the rockets are being fired from farther away.”

In light of the new Russian strategy, “when we hear that there is an incoming strike from Russia, we already know they’re going to aim at the power supplies, or power lines,” Braharnyk said.

DTEK’s crews now stay close to their operational base, ready to load up and deploy on a moment’s notice. The risks remain real.

“Even now, we’re not really confident because no one knows if they will do a double hit when we deploy to repair a site that they’ve just struck,” he said.

“The hardest thing is … hearing the explosions and the strikes and we don’t know what it is exactly: it could be incoming missiles or SWAT teams de-mining fields so other brigades can get through,” Braharnyk said.

For the electric company crews, it’s about getting the job done, “no matter what’s happening around us,” he said. “We’re just here to fix it.”