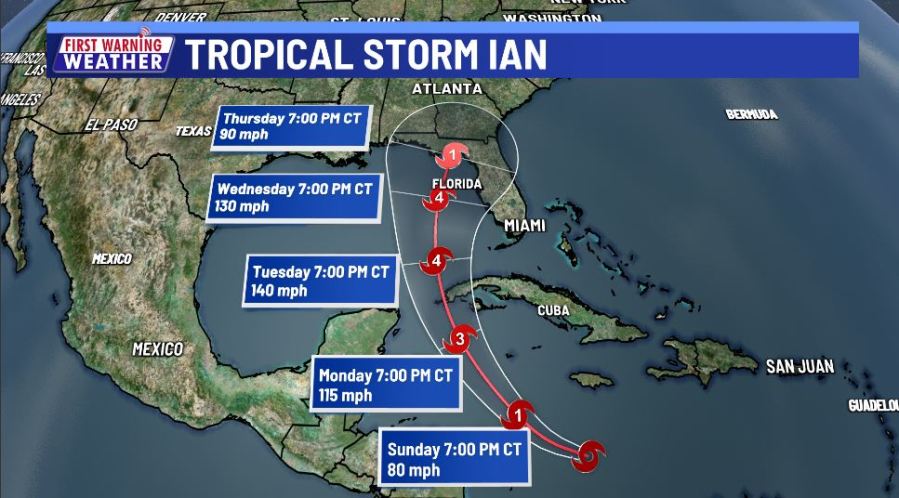 AUSTIN (KXAN) –Tropical activity increased this week after a quiet August and early September. This Saturday morning has three tropical storms (Gaston, Hermine, and Ian), a post-tropical storm (Fiona), and an area of low pressure in the open Atlantic.

It is Tropical Storm Ian that has our attention as it has its eyes set on the Gulf Coast next week.

It is heading toward an area of very high ocean heat content. The swirling mass of thunderstorms will move over 87°F water near Jamaica and Cuba — water that has gone untapped by any tropical cyclone since last year. Generally, a hurricane only requires 80°F water to develop and survive.

As the storm’s winds blow across the ocean surface, heat and moisture are drawn upward into the storm, condensing into clouds. Heat originating in the sea then released again in the condensation process warms the storm’s core further — creating a positive feedback loop that invigorates vertical motion and tightens the storm’s circulation.

Forecast model tracks take the storm away from Texas and toward the Florida Peninsula. A large trough in the jet stream expected to be located across the northeast next week will lift the system northward across Cuba toward South Florida, keeping Texas out of the crosshairs.

T.S. Ian will likely move into the Gulf to become the first named storm in the Gulf in 2022.

Although moving across the mountainous island of Cuba may disrupt the storm’s intensification early next week, Ian is still expected to strike Florida as a hurricane — and possibly a major category 3+ hurricane. If the storm does strike Florida at hurricane strength, it would be Florida’s first hurricane landfall since Hurricane Michael on Oct. 10, 2018. Michael was a devastating category 5 storm in the Panhandle with winds up to 161 mph when it made landfall near Tyndall AFB just southeast of Panama City.

In Central Texas, impacts from this storm will be minimal as the center of it is expected to remain 1,000+ miles away. If the storm has a large enough circulation; however, it may reinforce a northerly flow across Texas behind next week’s cold front, keeping humidity low and temperatures mild through late in the week.

Stay with the KXAN First Warning Weather team as we track the storm’s progress.