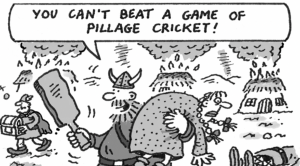 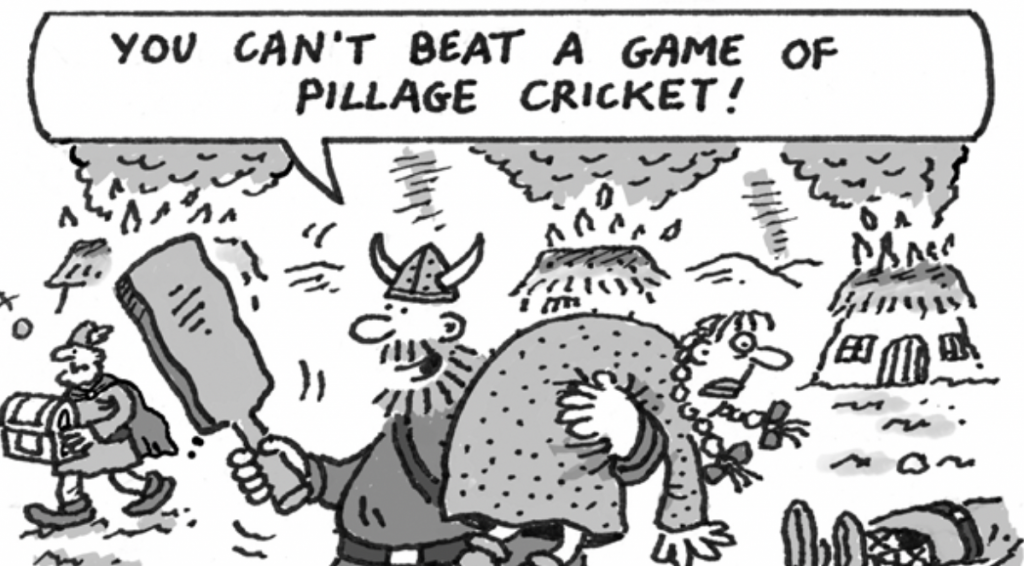 For the 2022 Wisden Cricketers’ Almanack, Kit Harris traces cricket back over 1000 years ago to its Norse counterpart, knattleikr – a game of bat, ball, honour and violence.

The Vikings are back. It may have taken a millennium, but they’re in fashion again: Ragnarok is on Netflix, Loki on Disney+, Norsemen had three television series, and the fourth Thor film is out this year. None depicted cricket, but they might have done, for buried away in the Icelandic sagas are numerous references to a pastime called knattleikr – “the ball game” – which bears a passing resemblance to our summer sport.

Eight sagas can be mined for details of knattleikr, and three – Egil’s saga, Grettir’s saga and G ́ısli’ssaga–allow the historian to figure out the specifics. Admittedly, this exercise has not been undertaken often, nor with much enthusiasm; the study of Norse recreation usually plays second fiddle to tales of marauding, exploring or pillaging. But to a cricket enthusiast, an attempt to reconstruct the game’s history and characteristics bears unexpected fruit.

There is, of course, no Viking Wisden (but then there isn’t a W in the Norse alphabet). Indeed, it is likely there were no scores at all: these games were played for honour, as a show of strength, to settle – or start – a feud. You won simply by being judged a better man. Dr Terry Gunnell, Iceland’s foremost – and only – expert in Norse pastimes, views knattleikr primarily as a means of developing a narrative. “It’s a way of fighting without fighting,” he says. “The game focuses on upsets; it’s never described as an end in itself, more a way of advancing the story of the men involved.”

Men played against men, though there were secondary games for the juniors; there is no mention of women, though it is by no means unlikely that they did play. They were strong, occupied key roles in society, and feature prominently throughout the sagas, even if there is little mention of them in tales of law, war or sport. It is possible they were above such coarse and acrimonious competition.

Players faced each other in pairs. One hurled a ball at his opponent, who wielded a bat and could strike the ball, which could be chased or caught by the bowler. Very hard hits could put the ball beyond the boundary of the playing area. Intimidation was common, if not integral. The bowler was embarrassed if the batter struck the ball back over his head, forcing him to chase it, and the ball was hard enough to fell the batter. Dr Bev Thurber, a scholar of winter sports from Illinois, says a Norse ball was found “during an excavation in York. It was made from several pieces of leather, sewn together and tightly stuffed. It was probably pretty hard.” Physical fights frequently ensued, and sledging was highly esteemed, especially in traditional Skaldic verse.

Knattleikr was popular among spectators, too. Tournaments drew huge crowds from all over Iceland, and many would camp near the field of play, since the game took place from dawn until dusk over several days. The participants represented their homesteads: teams were often divided not only geographically but along family lines. Each had a captain, usually a senior member of the family rather than the best player; however, the stories in the sagas focus on the sporting prowess of their eponymous hero.

The earliest dateable reference to the game comes from Egil’s saga, set in west Iceland. Egil was born in 904 and is one of the great antiheroes of the Viking sagas; his contest against Gr ́ım is knattleikr’s most famous. Gr ́ım intimidates Egil, who retaliates by hitting him with the bat. Gr ́ım pins him to the ground, before Egil skulks away, jeered by the crowd. Shortly after, Gr ́ım takes a catch and runs around in celebration, whereupon Egil seizes an axe and drives it into Gr ́ım’s head, “right down to the brain”. This precipitates a battle in which seven men are killed. Gr ́ım is 11, and Egil seven.

Grettir’s saga tells the tale of a typically hot-tempered outlaw from Norway. When he is 14, Grettir is invited to play in a tournament in north Iceland. The captain nominates him to bowl to AuDun, the opposing team’s strongest player; AuDun, much older than Grettir, hits the ball back, far over his head, across the ice (Thurber says the game would have been played on frozen lakes, since they would have been the only flat surfaces, and the players wore studded shoes). Grettir is so incensed that he hurls the next ball straight at the batter’s head, drawing blood. A fight ensues. AuDun tries to hit Grettir with the bat, and they wrestle; the spectators are impressed at how Grettir can hold his own, at which point AuDun knees him in the groin. The fight is broken up, since nobody wants it to develop into a full-blown feud; wars within extended Viking families make the Middle East look like a Punch and Judy show. The saga baldly reports that “the game went on and nothing else caused friction”.

Another account, in G ́ısli’s saga, describes a game in the rocky and windswept fjords, pitting two Norwegian fugitives – G ́ısli and Ao ́rgr ́ım – against each other. Initially, G ́ısli is criticised by his team-mates for not giving his all; he ups his game and brings “Ao ́rgr ́ım down so that the ball went out of play”. This doesn’t necessarily imply bodily contact. One interpretation is that G ́ısli knocked Ao ́rgr ́ım over with a short-pitched delivery, and the ball ran away to the boundary. Ao ́rgr ́ım rises and sees, beyond the field, the burial mound of G ́ısli’s brother, whom he had killed in a feud a few months previously. Gaining confidence, he recalls, in verse: “The spear screeched his wound sorely / I cannot be sorry.” But G ́ısli sticks to Bodyline, and fells Ao ́rgr ́ım again, saying: “The ball smashed his shoulders broadly / I cannot be sorry either.” G ́ısli is unanimously declared the winner – surely the first occasion a sporting contest was won not by strength but by stanza.

The ICC disciplinary committee would have had their hands full. Not all the sledging was poetic: in one saga, the hero calls his opponent a “cesspool pig”; in another, a player breaks a spectator’s neck after being barracked. In a third, a team win by slaying six rivals. But there was a governing body: the Norse parliament, no less, which had their own version of Law 42: “Whenever a man goes to play a game, let him stay no longer at it than he pleases. Then he is responsible for whatever harm may come to him.”

And we have all known a Norseman on the cricket field, for the traits of the players are timeless: here is Bl ́ıg, dropped from his team on account of his aggressive temperament; there is Gull-Ao ́rir, an accomplished player, but an unpopular captain. Everyone knows an Ingo ́lfur, who quits a game so he can flirt with a female spectator. Numerous shady figures have played Kolgr ́ımur, who fixes the outcome. And every club cricketer has rolled their eyes at a Kjartan, who says he hasn’t played for ages, but proves the best of the lot.

It is not easy to draw a conclusive link between knattleikr and cricket. Gunnell believes that, given the link between the Norse and the Gaelic, hurling may be a more likely descendant, though cricket has more in common with the Viking game. The trouble, Gunnell points out, is that there is no literary reference to knattleikr after Iceland’s Norse era ends in 1262. There is a missing link to bridge the game across the ocean to its first proven appearance in England, at Guildford in the mid-16th century. But Gunnell is not a cricket historian. He does not know that the etymology of “cricket” hints at an origin in France or Belgium. Suppose we wanted to find a connection, even for fancy’s sake? With a little artistic licence we could construct a Piltdown Man, and adorn it with barely believable bones.

There is a Danish saga which tells of two famous and unbeatable knattleikr players from Flanders. Imagine if the Viking game reached Belgium! And then there is French cricket, in which the batter has to repel attacks on his legs by the bowler, with no method of scoring. Is it a sanitised knattleikr that children still play in the gardens or on the beaches of Britain?

If knattleikr really is the forerunner of the great game, then bloodthirsty Egil is the godfather – the Norse would call him a freyr – since his contest is the oldest. He was born in 904, and as he was seven when he slayed his opponent, it follows that cricket celebrates its 1,111th birthday this year: a Nelson of sorts. And Egil, also a great poet, might say: My claim as the freyr of krikket shall stand / and that of Broadhalfpenny Down be damned!