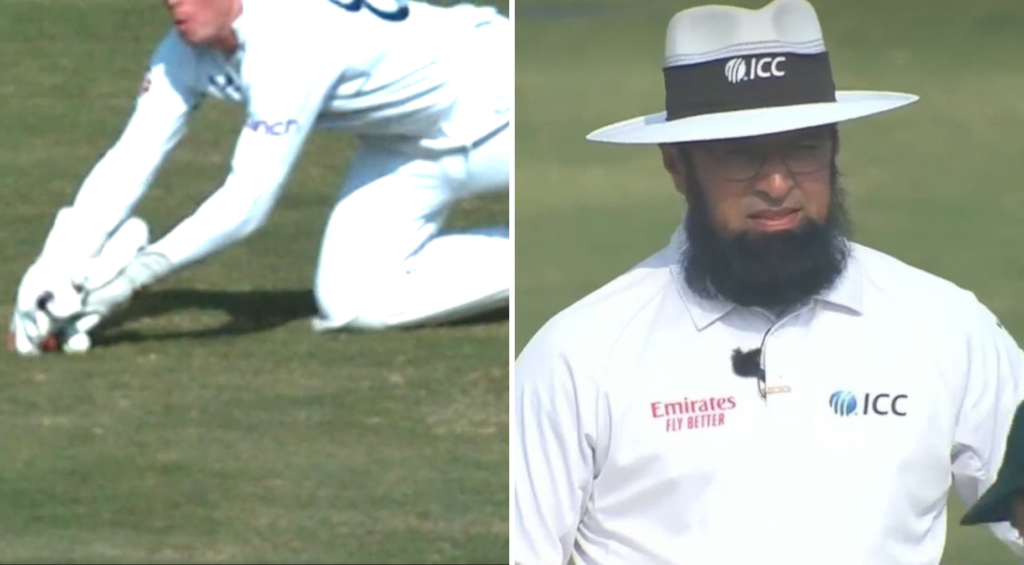 The umpires in the second Pakistan-England Test match have come under scrutiny for a crucial decision close to the end of the game, with Saud Shakeel given out caught behind on review by the TV umpire.

Shakeel, on 94 at the time, was within touching distance of a maiden Test century, and looked to be guiding Pakistan to a famous, series-levelling win. Instead, his was the second wicket to fall in a collapse of 5-38, Pakistan sliding from 290-5 to 328 all out and a 26-run defeat.

Shakeel was strangled down the leg-side, with Ollie Pope taking a low catch off Mark Wood. Wood looked unsure at first as to whether the ball carried, but Pope was convinced, and Aleem Dar sent the decision upstairs with the soft signal ‘out’.

After a lengthy review, TV umpire Joel Wilson ruled that Dar should stay with his on-field decision, and Shakeel was sent on his way.

There was plenty of debate over the decision, with some feeling Wilson should have overturned Dar’s call. Pakistan captain Babar Azam was one of those of the opinion that there had been an error. “The Shakeel dismissal cost us,” he said. “It looked to us as if the ball had touched the ground. As a professional, you have to respect the umpire’s decision, but we felt the ball had been grounded.”

Others suggested that the soft signal rule had changed, and that this should have an impact on the outcome. The suggestions were that the soft signal now only applied if there is an error in technology, with the TV umpire coming to what they believe is the correct decision no matter what the on-field official has signalled.

However, it is unclear where these suggestions come from. There are no news reports of any recent changes to the ‘soft signal’ protocol, and the ICC’s Playing Conditions, last updated in November 2022, still state that the TV umpire must find conclusive evidence to overturn the on-field call. Clause 2.2.2 of Appendix D of the ICC’s World Test Championship playing conditions deals with the soft signal protocol for umpire reviews. It states: “If the third umpire advises that the replay evidence is inconclusive, the on-field decision communicated at the start of the consultation process shall stand.”

The soft signal rule is a much-debated wrinkle in the Decision Review System. In July, Ben Stokes called for the rule to be done away with, while the MCC have put forward that a third soft signal – ‘unsighted’ or similar – should be used for outfield catches when the on-field umpire has little evidence to go on.

The Indian Premier League has done away with the soft signal, but there is nothing to suggest the ICC has done likewise.

The post The Saud Shakeel soft signal controversy: What the ICC playing conditions say, and how they have, haven’t, and might change appeared first on Wisden.