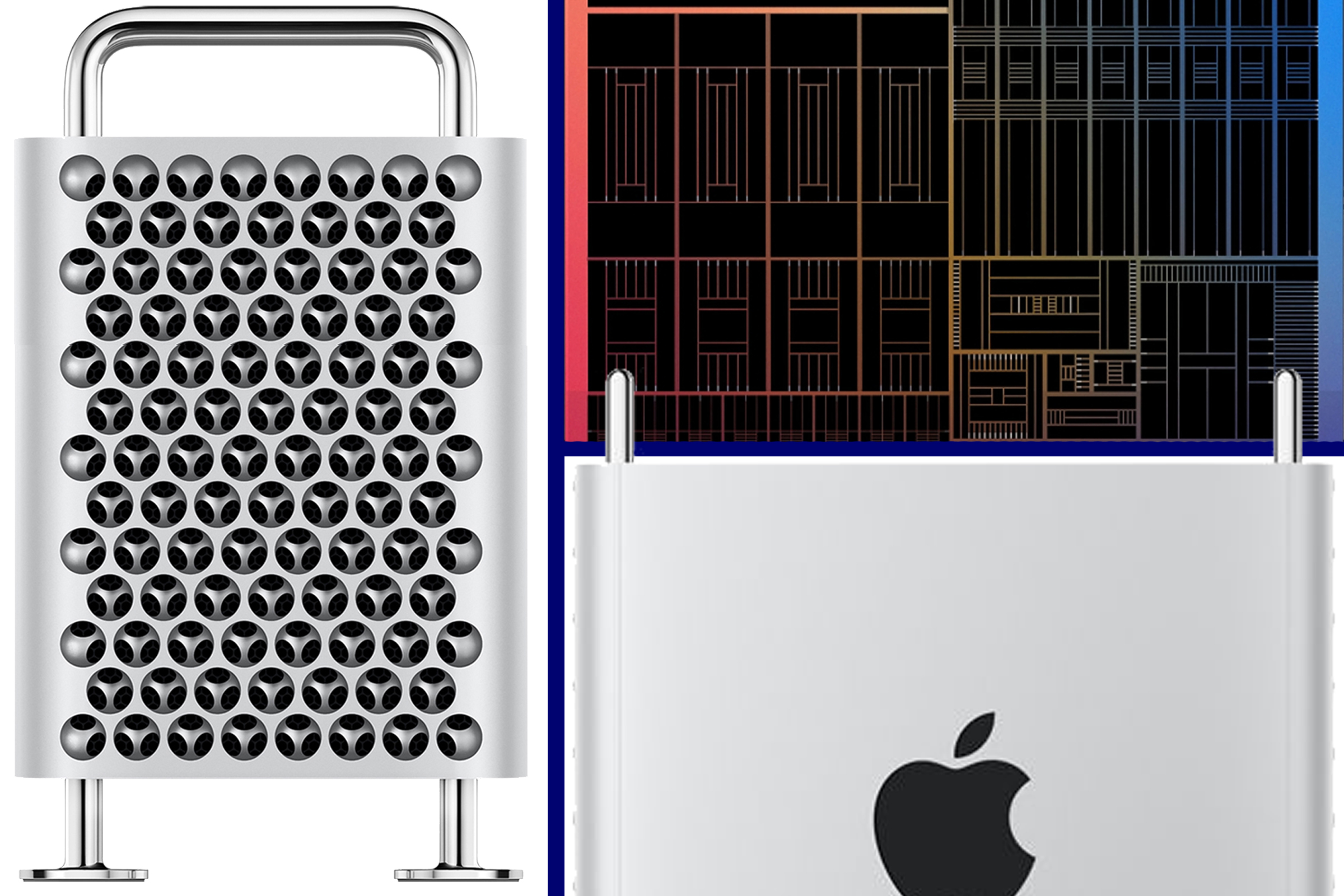 Apple’s current Mac Pro was introduced in 2019, but since then Apple has transitioned every other Mac to its own chip architecture, starting with the M1 in 2020 followed by the M1 Pro, M1 Max, M1 Ultra, and eventually the M2 in 2022. The Mac Pro, which is still using an ageing Intel processor, is looking very dated.

Therefore it is expected that the Mac Pro will soon undergo a major update when Apple adds its own System on a Chip (SoC) to the workstation. This article keeps track of everything we are hearing about the new Mac Pro, so return to this page to keep up to date with what could be coming.

Apple’s silicon-powered Mac Pro was a surprise no-show at WWDC; the developers conference was the location where the 2019 and 2013 Mac Pro were launched (shipping later in the year). So when will we see the new Mac Pro?

Apple said back in June 2020 that it planned to transition all of its Macs to its own chips within two years. This can be interpreted as two years from June 2020, or two years from when Apple introduced the first M1 Mac: November 2022. So we can assume that, at some point before the end of 2022, the Mac Pro will gain a powerful Apple chip – assuming Apple doesn’t miss its own deadline.

Bloomberg’s Mark Gurman said in an August 2021 Power On newsletter that Apple is on track to meet its deadline of November 2022 for the Apple-powered Mac Pro (read: Gurman: Apple iMac and Mac Pro to arrive by November 2022). So, there is a chance we could still see a new Mac Pro launch at an Apple event in October 2022.

However, that that Gurman prediction came in summer 2021 – in a newsletter in September 2022 Gurman suggests that we might not see the new Mac Pro until 2023.

Earlier in 2022 a tweet from analyst Ming Chi Kuo made a similar prediction that the updated Mac Pro (and iMac Pro) won’t arrive until 2023:

It’s no real surprise that the wait for Macs like the Mac Pro to start to use Apple Silicon would be so long: Apple’s high-end desktops involve considerably complex development with Apple encountering more challenges. It would be no big surprise if Apple misses the deadline with the Mac Pro, especially as the industry is encountering component shortages and other delays.

The other big question is how much will the new Mac Pro cost. The current Mac Pro starts at $5,999/£5,499 and we assume the Apple silicon-based Mac Pro will stick with that general price point. Apple’s M1 Mac prices haven’t fluctuated much from their Intel predecessors, so the new Mac Pro will almost certainly be a super-high-end machine for professionals.

However, since the advent of the Mac Studio, which starts at $1,999/£1,999 for the M1 Max version, rises to $3,999/£3,999 for the M1 Ultra version, and tops out at $7,999/£7,999 if you fully spec it out, there is a question of what the Mac Pro would bring that that model doesn’t already offer. Many are hoping that the Mac Pro will offer the upgradability and configurability that the Mac Studio lacks, which may justify a slightly higher price for similar specs.

Will the new Mac Pro have a new design? Bloomberg’s Mark Gurman, who seems to have some good sources, has previously reported that Apple won’t discontinue the current Mac Pro design. This seems likely given the problems Apple encountered the last time it made the Mac Pro smaller. We hope that the company won’t be making the same mistake twice and the new Mac Pro will maintain the proven design.

What can we expect from the new Mac Pro? Those Mac users for whom the Mac Pro is targeted will be interested in the capabilities of the machine. Will Apple be able to make a processor to rival the workstation processors of Intel?

In a July 2022 Power On newsletter, Bloomberg’s Mark Gurman indicated that Apple will use a new M2 Extreme chip in the high-end Mac Pro, with the M2 Ultra available are a lower cost. It’s unknown what the specs for those chips are, but there was an earlier the suggestion that Apple would combine two M1 Ultra to make an M1 Extreme – should it do the same with the M2-series we could expect:

We run though the expectations for the M2 chip series here: Apple’s M2 chip: Everything you need to know.

Right now the maximum CPU cores you can get in a Mac Pro is 28 courtesy of its Intel Xeon processor. The best Mac Studio can provide 20-core CPU. By comparison, AMD offers up to 64 CPU cores for some of its high-end chips for gaming PCs.

Based on Apple combining two M1 Ultra we could see a 40-core CPU, but now that the M2 is here that could theoretically jump to a 48-core CPU. As for how many of those cores will be high performance, a 2020 Bloomberg report that claimed the new processor that Apple is working on for the Mac Pro will offer 32 high performance cores – but that was relating to the M1, so it could be even higher.

Bloomberg’s Mark Gurman echoed these predictions in a May 2021 report where he suggested the Apple silicon Mac Pro could be available with 20 or 40 computing cores, with 16 performance cores and four efficiency cores in the former – which sounds a lot like the M1 Ultra (Apple’s codename for this SoC is Jade 2C-Die), and 32 performance cores and eight efficiency cores in the latter (codename Jade 4C-Die).

Will Apple use an Intel processor in the new Mac Pro?

According to yuuki_ans in a Tweet in July 2021, Apple could release a Mac Pro that uses Intel Ice Lake Xeon W-3300 workstation processors in 2022. Brendan Shanks on Twitter has also spotted references to Intel’s Ice Lake processors in the Xcode 13 beta.

In response, Mark Gurman tweeted that Apple had been working on an update to the Mac Pro that featured an Intel processor.

However, over a year later that update has not materialised and therefore we don’t expect that there will be another Intel update coming to the Mac Pro.

The Apple silicon Mac Pro use the graphics on the SoC instead of graphics cards by AMD. According to Gurman‘s initial predictions in summer 2021 the graphics could have 64 or 128 processing cores. However, it’s now looking like we could see even more GPU cores based on the extra cores available in the M2.

The M1 Ultra offers a 64-core CPU, so even if Apple was to combine two M1 Ultra we could see a 128-core GPU in the new Mac Pro. Based on the M2 we could see as many as

If Apple continues to sell an Intel-based Mac Pro models we can assume it will continue to use AMD graphics, but no reports have surfaced that cover what possible upgrades are in store if any. Nor do we know how long Apple will continue to sell non-Apple silicon Macs.

RAM is an important consideration for creative pros. The M1 Max supports 64GB RAM (or unified memory as Apple refers to it) and the M1 Ultra supports 128GB Unified Memory. If Apple is able to combine two M1 Ultra we could see support for 256GB RAM.

However, the current Intel Mac Pro offers up to 1.5TB of DDR4 ECC memory in 12 user-accessible DIMM slots, which already places it ahead of where the new Mac Pro could theoretically be. But there is another issue that may lead pros to dismiss this machine: Apple doesn’t use typical, user-upgradable, RAM in M1-powered Macs. Instead it uses unified memory, which is quite different. This RAM isn’t just soldered onto the motherboard on the M1 MacBook and iMac—it’s built directly into the chip, making it faster and more efficient. There are certainly benefits to be had, but for users who demand customization options there may be a need to offer slots so that the RAM can be upgraded like the Macs of old. We don’t know if Apple will take such an approach with the Mac Pro, however.

But more likely is a dramatic rethinking of what a Pro desktop is. The unified memory is a big part of what makes the M1 Macs so fast, but tying the memory to the chip would drive up the purchase price significantly. The Mac Pro already starts at $5,999, but if you buy RAM through Apple it could add as much as $14,000 to the price. So if Apple doesn’t allow aftermarket memory, it’s also likely to limit the build-to-order options at checkout.

Apple currently offers up to 8TB of storage in the Mac Pro, and we expect the storage options to remain the same. The ports likely won’t change either, as Apple already offers four USB ports (two Thunderbolt 3 and two USB 3) and a pair of ehernet ports. However, the Mac Pro has eight PCIe x16-sized slots that support many different types of PCIe cards, so you can easily add more ports. We assume Apple will allow expansion slots on an M1 Mac Pro, but compatibility is a question.

When Apple launched the Mac Pro in 2019, it had a pricey companion to go with it: a $5,000 Pro Display XDR with an optional $1,000 stand. It is possible that Apple is working on an upgrade – which could be even more expensive. Read about the new XDR display in our separate rumor round up.

Then again the rumours about a new display may just relate to the Studio Display which launched in March.