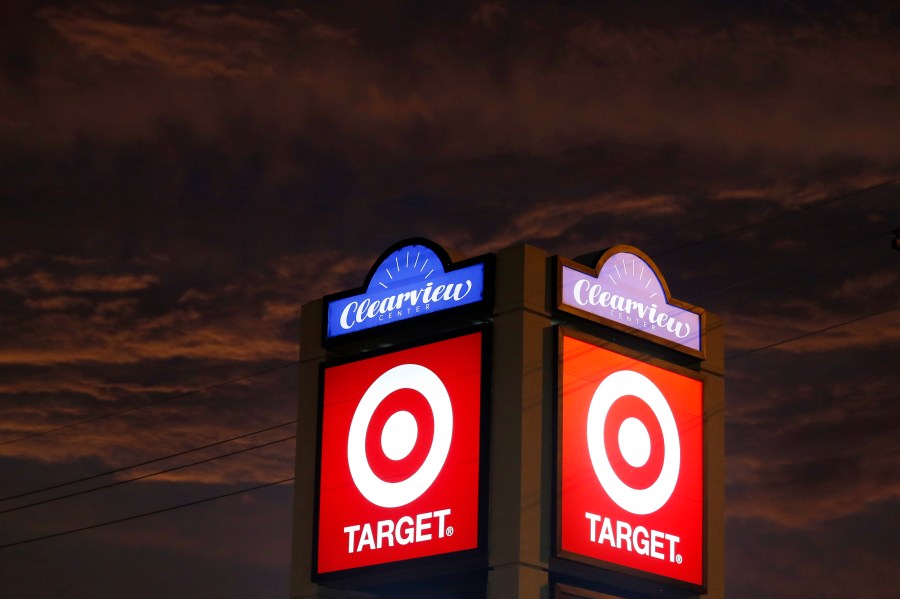 NEW YORK (AP) — Target reported an uptick in third-quarter sales but profits tumbled 52% after it was forced to cut prices on clothing and other goods to entice Americans squeezed by inflation.

The Minneapolis retailer voiced caution about its sales and profit during the fourth quarter and the critical holiday shopping season.

Target also said that will be slashing expenses with a goal of saving $2 billion to $3 billion over the next three years. Those cost cuts will not include layoffs or hiring freezes, executives said.

In what could be an ominous sign, sales and profit trends weakened significantly in the weeks leading up to the end of the quarter on Oct. 29 as customers waited for deals or traded down to private brands, said Chairman and CEO Brian Cornell.

“It’s an environment where consumers have been stressed,” Cornell said. ”We know they are spending more dollars on food and beverage and household essentials. And as they are shopping for discretionary categories … they are looking for that great deal.”

Cornell said that mindset will continue through the holiday shopping season.

Shares of Target Corp. slid 14% before the opening bell and it dragged down other major retailers as well. Macy’s and Kohl’s fell 3% to 5%. Even Walmart, which topped profit expectations and raised it expectations for the year when it posted quarterly earns Tuesday, fell 2%.

Target has taken a bigger hit than its rival Walmart and the disappointing performance comes after a streak of stellar quarterly profit and sales results.

The disappointing quarter follows Target’s nearly 90% tumble in profit in second quarter and a 52% drop in the first. In early June, Target warned that it was canceling orders from suppliers and aggressively cutting prices because of a pronounced spending shift by Americans as the pandemic eased.

Retailers were blindsided by the lightening-fast shift by consumers from spending on things like TVs and small kitchen appliances, to dinners out, movies and vacations. Adding to that shift: surging inflation has created less wiggle room for discretionary purchases like new clothing.

Revenue rose 3.4% to $26.52 billion compared with the year ago quarter. The sales came above estimates for $26.41 billion, according to FactSet.

Comparable sales increased 2.7% — those that come from stores and online — on top of a 12.7% growth last year.

The quarterly operating income margin rate was 3.9% in 2022, compared with 7.8% in 2021 as markdowns hit profits, as well as rising theft and merchandise and freight costs.

The company said that “based on softening sales and profit trends that emerged late in the third quarter and persisted into November,” it would be prudent to plan for a wide range of sales outcomes in the fourth quarter.

Target said that it now expects a low-single-digit decline for comparable sales for the fourth quarter. Similarly, it said it believes that operating margin rate will be around 3%.

In August, Target said it was sticking to its prior guidance for full-year revenue growth in the low-to mid-single-digit percentage range. It also expects operating margin rate in a range around 6% in the second half of the year.