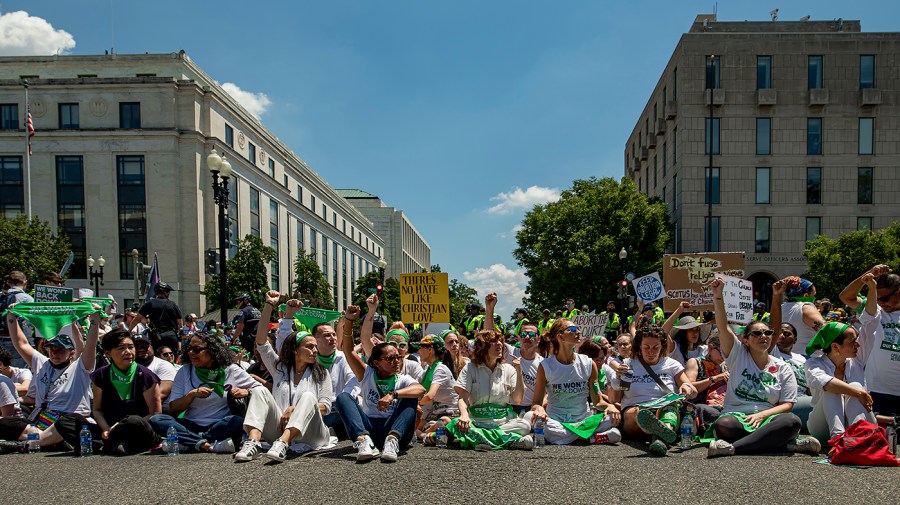 One hundred days after the Supreme Court overruled Roe v. Wade and ended the constitutional right to an abortion, public approval of the court has dropped to historic lows as it prepares to open its new term on Monday.

According to a Gallup poll released on Thursday, just 47 percent of Americans said they have at least a “fair amount” of trust in the judicial branch, representing a 20-percentage-point drop from two years ago, including 7 points since last year.

A record number of people now view the court as too conservative. The drop in trust is driven largely by a sharp decline among Democrats, the poll found. Only 25 percent of Democrats, down from 50 percent a year ago, have a great deal or fair amount of trust in the court.

A Marquette University Law School poll from earlier in September found that just 40 percent of adults approve of the job the Supreme Court is doing.

Julian Zelizer, a professor of history and public affairs, said the numbers underscore that this is a defining time for the court.

“The Supreme Court is at an important moment,” Zelizer said. “Trust in the institutions has vastly diminished, certainly among Democrats, and many have a close eye on how they rule on other vital matters. If decisions seem to keep coming from a very pointed political direction, frustration and calls for reform will only mount.”

Even before the ruling to overturn Roe, progressives had been sounding the alarm about what they saw as a dangerous Supreme Court that was out of step with the majority of Americans.

But in the wake of the ruling in Dobbs v. Jackson Women’s Health Organization, many Democrats, including President Biden, are seeking to use the Court’s rightward turn as a way to galvanize turnout ahead of the midterm elections.

“Justice Alito said that women can decide the outcome of this election — paraphrasing some quote in the actual decision. Well, he ain’t seen nothing yet,” Biden said last week at a Democratic National Committee event.

Democratic strategist Rodell Mollineau predicted that the tenor around the Supreme Court won’t improve anytime soon. But he said that the current state of the court could help Democrats down the road.

“The more the American people understand just how partisan this court has become, it will not only help Democrats politically, but it might lead to some judicial reforms,” Mollineau said.

“But the flip side is that we’d be throwing gas on a fire and we’d be adding another institution the American people don’t trust.”

Legal experts said the public perception of the ruling highlights just how fraught the Supreme Court’s standing is. Unlike other branches of government, the legitimacy of the judicial branch depends on how its rulings are seen by the public.

“The court has no real way to enforce compliance with its decisions beyond the understanding that what it is doing is somehow a legitimate exercise of law as opposed to something else,” said New York University law professor Melissa Murray.

“The public may not accept a decision as legitimate when it seems like the decision is … simply rooted in the personnel of the court,” Murray said. “Like it’s meaningful that Roe was upheld multiple times by earlier courts and now is overruled as soon as there is a six to three conservative supermajority.”

According to Gallup, public approval of the Supreme Court has been slipping steadily since last year, falling from 49 percent in July 2021 to 40 percent last September, just after the court allowed a restrictive Texas abortion law to go into effect.

“It’s really on Roberts to see what he can do as a leader and getting [the justices] to be cohesive,” Del Percio said, adding that should come down to the cases they hear and the tone Roberts sets behind the scenes and “looking for common ground and toward people’s better angels.

“I think they’re willing to hear that message because if we don’t believe that, what hope is there?” she said. “While our institutions are holding, the people’s lack of faith in them is the ultimate demise.”

The justices themselves are aware of their diminished standing with the public and are openly debating about whether the court has become too political and is risking its reputation.

“The court shouldn’t be wandering around just inserting itself into every hot-button issue in America, and especially it shouldn’t be doing that in a way that reflects one ideology or one set of political views over another,” Justice Elena Kagan said during a visit to Salve Regina University in Rhode Island on Sept. 19.

“The thing that builds up reservoirs of public confidence is the court acting like a court and not acting like an extension of the political process,” Kagan said.

Kagan, who dissented sharply with the decision to overturn Roe, said public confidence is eroded when long-standing past decisions are disregarded.

“When we see the composition of the court change and then the whole legal system being kind of up for grabs and legal rules getting reversed here and there, that’s what makes people worry. And that’s what ought to make people worry that something else is going on here other than applying legal principles fairly inconsistently,” she said.

During an appearance at a judicial conference in Colorado in early September, Roberts said “it’s entirely appropriate” for members of the public to criticize rulings, but that doesn’t mean the legitimacy of the court needs to be called into question.

“So obviously people can say what they want, and they are certainly free to criticize the Supreme Court. And if they want to say the legitimacy is in question, they are free to do so. But I don’t understand the connection between opinions people disagree with and the legitimacy of the court,” Roberts said.

Seemingly responding directly to Kagan but without mentioning her name, Alito told The Wall Street Journal that implying the court is illegitimate “crosses an important line.”

“It goes without saying that everyone is free to express disagreement with our decisions and to criticize our reasoning as they see fit,” Alito said in a rare statement. “But saying or implying that the court is becoming an illegitimate institution or questioning our integrity crosses an important line.”