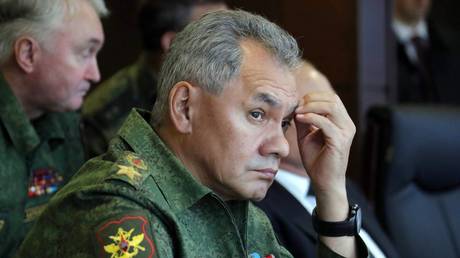 Speaking on Friday during a conference call at the ministry, Shoigu stated that “the Ukrainian armed forces’ attempts at an offensive continue on the Nikolaev-Krivorozsk and other directions, and the enemy is suffering considerable losses.”

The minister went on to allege that the counteroffensive had been planned by Ukrainian President Vladimir Zelensky’s office “solely to create the illusion before the Western backers that the Ukrainian military is able to conduct an offensive.”

Shoigu also claimed that Russian forces had taken over a village in Kherson region and reached the administrative border with Nikolaev region.

On Tuesday, Russia’s Defense Ministry issued a statement claiming that its troops had killed over a thousand Ukrainian service members as well as “foreign mercenaries” and destroyed dozens of tanks and armored military vehicles in just one day.

A day earlier, officials in Moscow proclaimed that the Ukrainian counteroffensive in Kherson region had “failed miserably.”

The Ukrainian government has been talking about a counteroffensive in the south of the country for several months now. In a video address on Sunday, President Zelensky promised to also reclaim the whole of Donbass, parts of the Zaporozhye and Kharkov regions currently held by Russian forces, as well as Crimea.