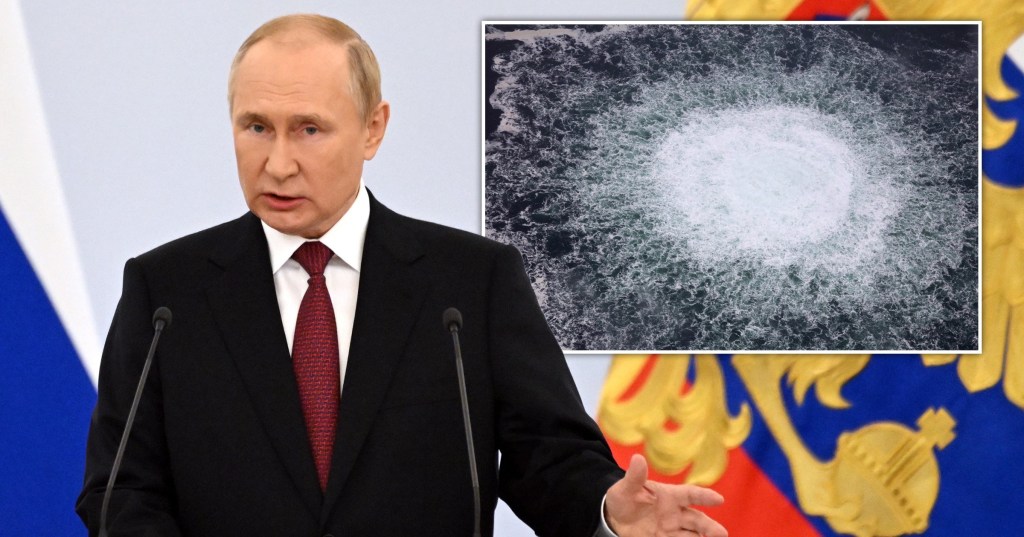 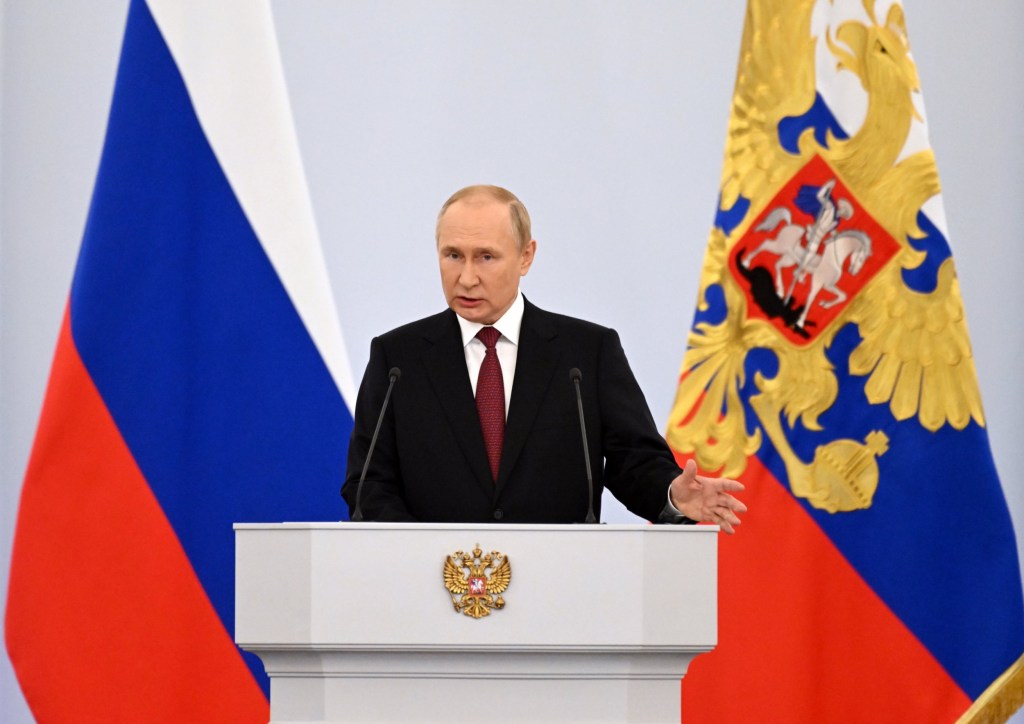 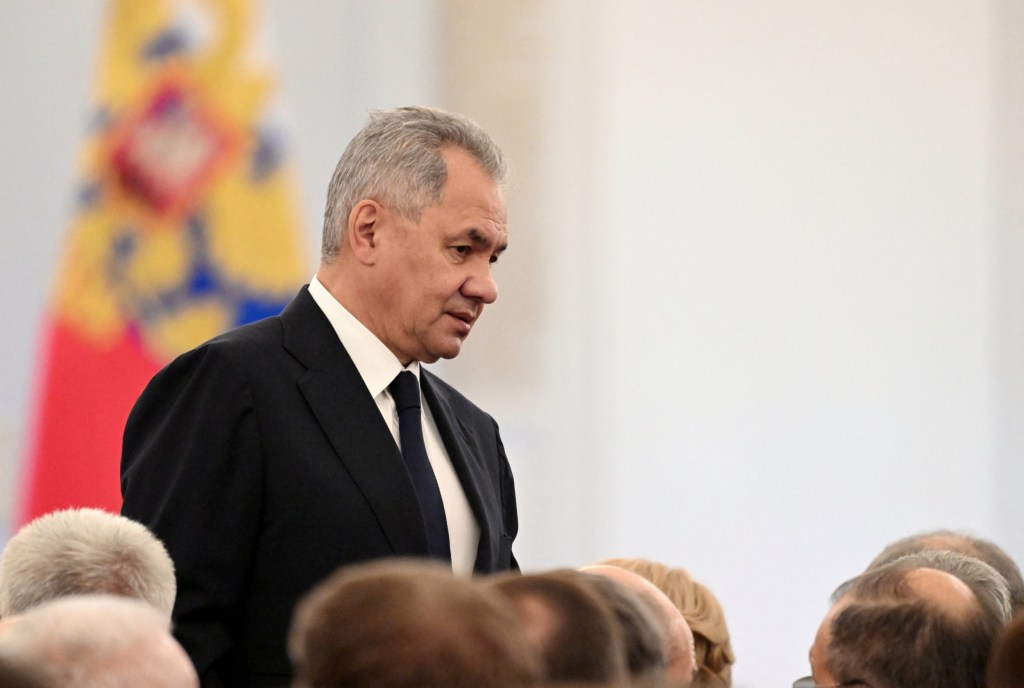 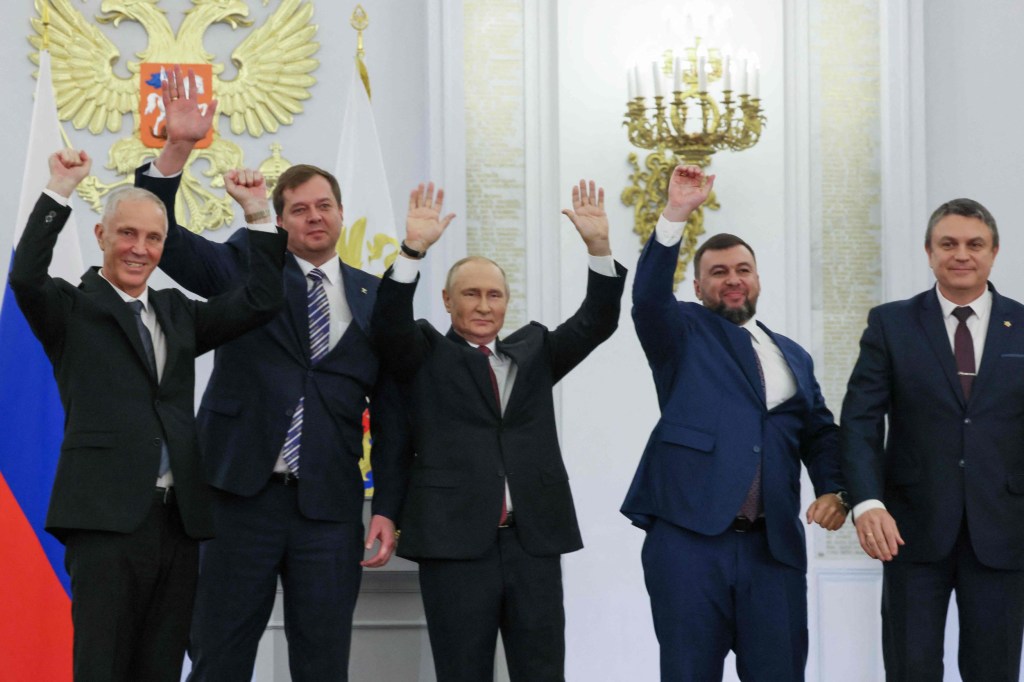 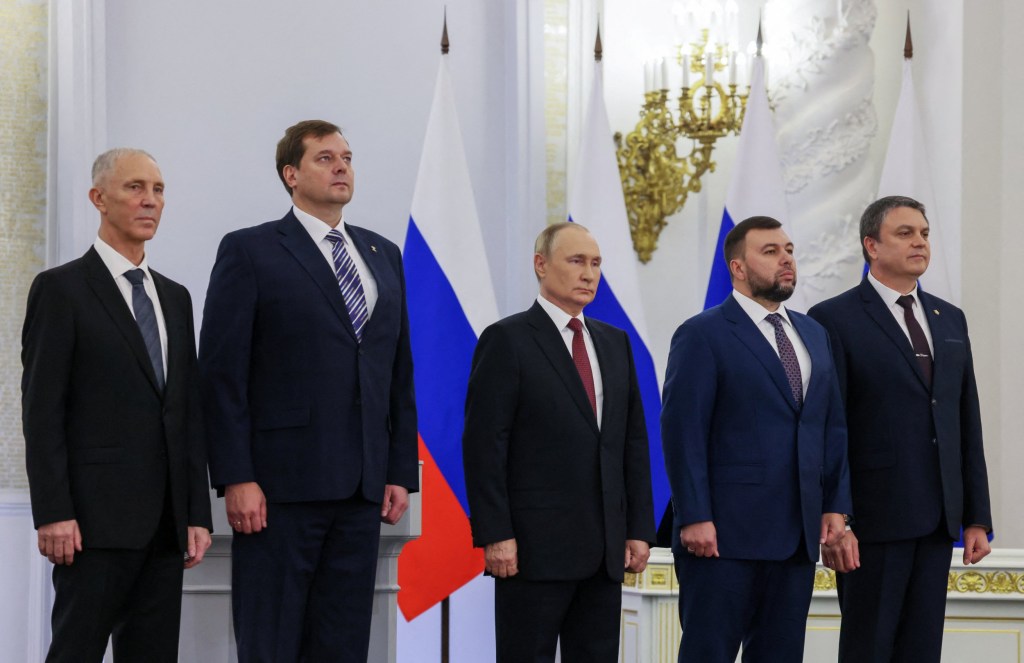 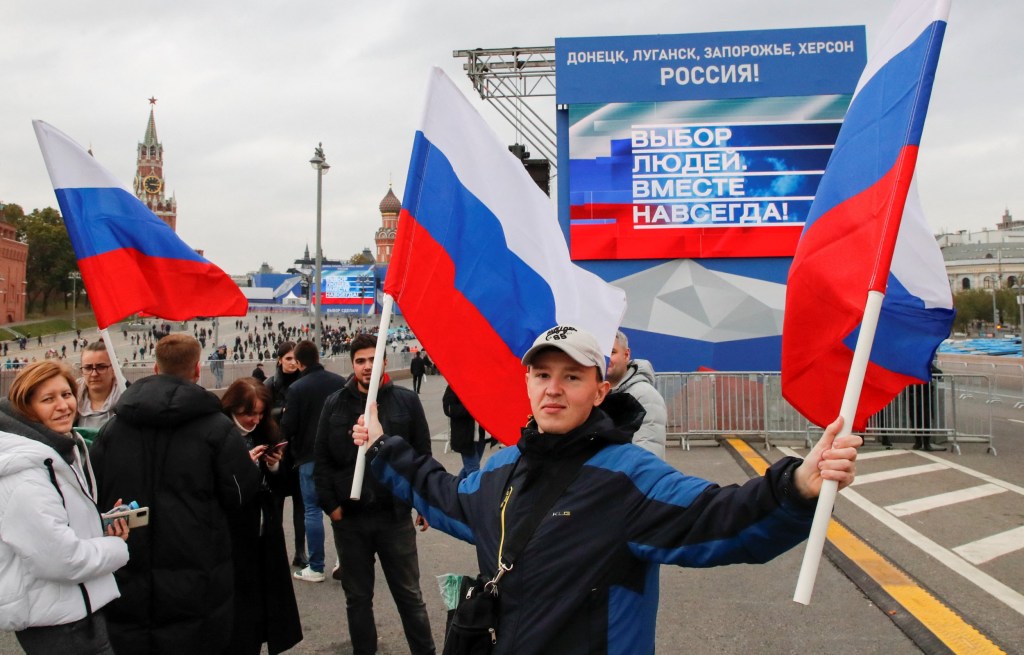 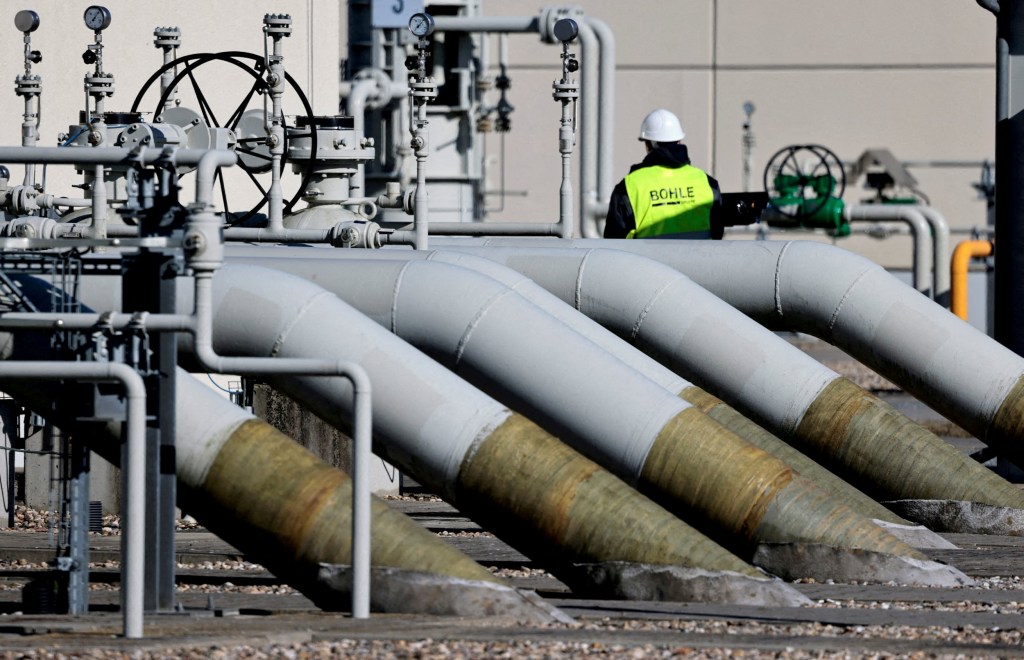 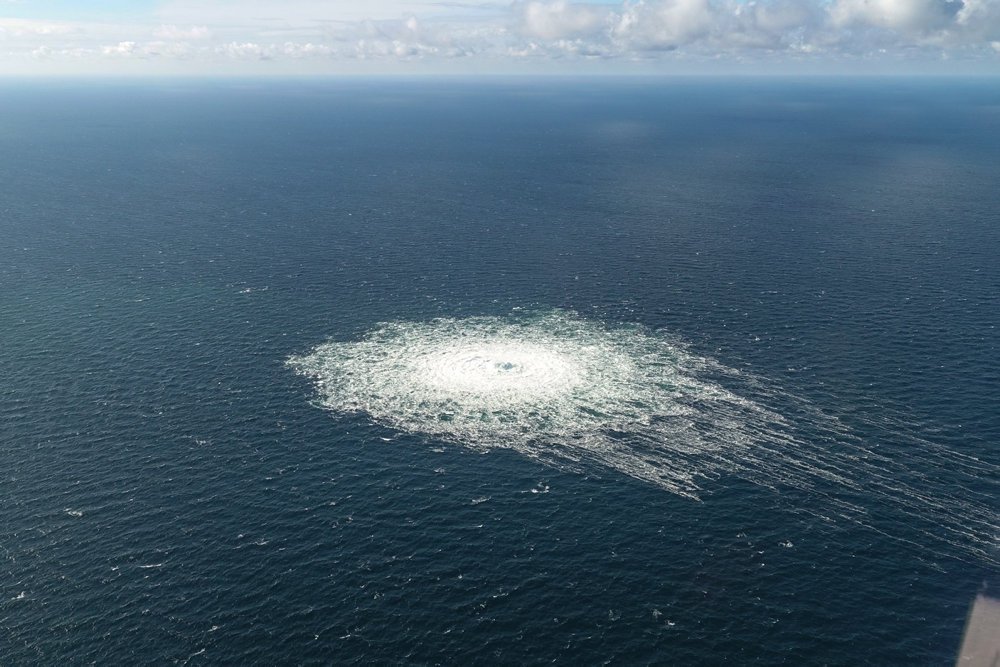 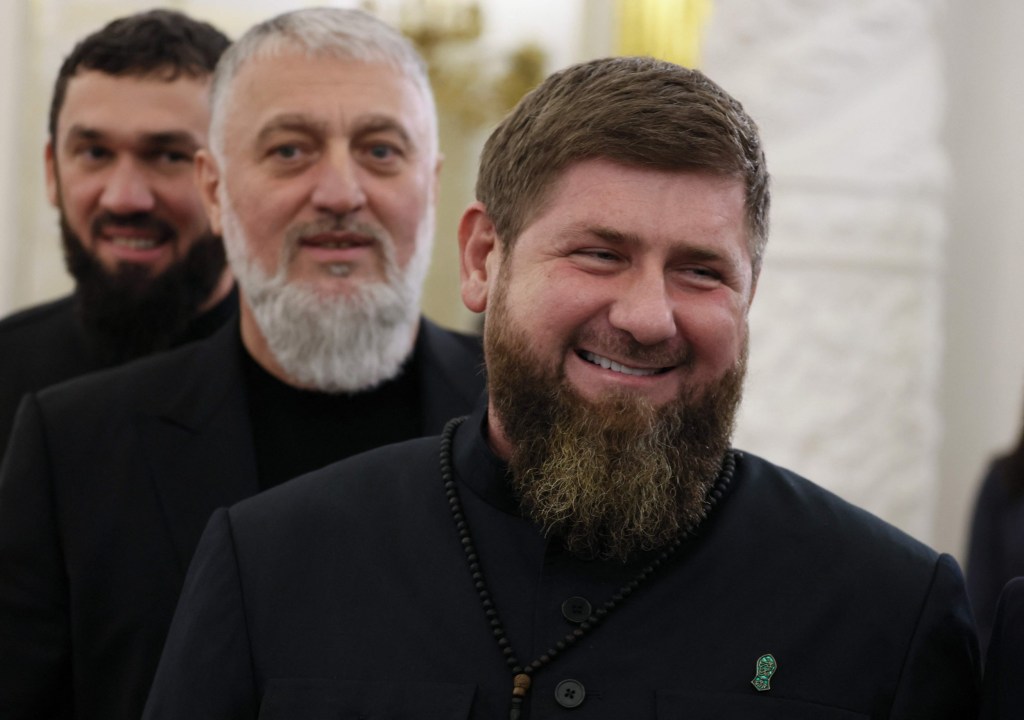 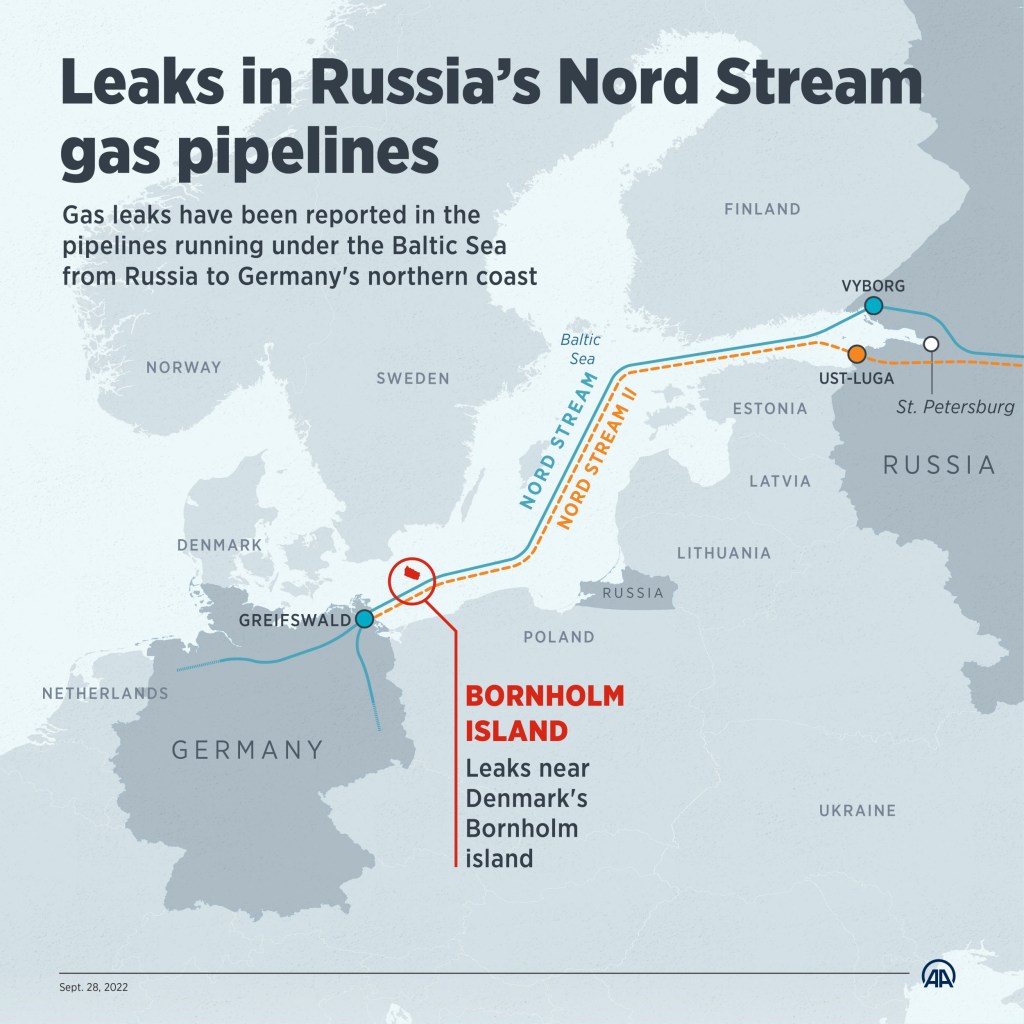 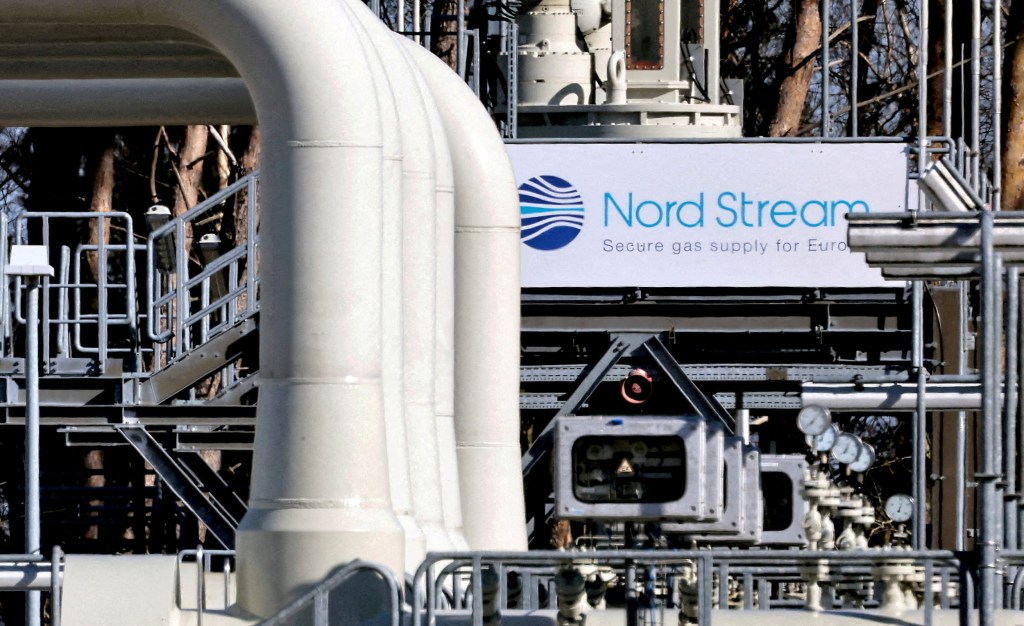 Speaking ahead of the illegal annexation of four parts of Ukraine, Putin claimed the west was to blame for the explosions of the pipelines.

He gave a speech to thousands of Russian ambassadors in St George’s Hall in the Kremlin.

Photos show the president signing treaties that would absorb the occupied regions of Ukraine into Russia in a lavish ceremony, breaking international law.

He began his rant against the West, honing in on the US and Britain, accusing them of sabotage.

Referring to British people as ‘Anglo-Saxons’, he said they helped ‘organise explosions of pipelines in the Balkan sea’.

Putin also referred to the US military as ‘brutal’, before condemning the expansion of Nato.

He said: ‘The sanctions were not enough for the Anglo-Saxons: they moved onto sabotage.

‘It is hard to believe but it is a fact that they organised the blasts on the Nord Stream international gas pipelines.’

He added: ‘They began to destroy the pan-European energy infrastructure.

As the ceremony came to a close President Putin and the Russian-backed leaders of the regions being seized stood for the crowd.

The scene echoed the events of eight years ago, when Putin was standing with the Moscow-installed leaders of Crimea – a southern Ukrainian peninsula annexed by Russia.

Two of them are in Sweden’s exclusive economic zone while the other two are in Denmark’s.

As a result, Norway has announced plans to deploy its military to protect its oil and gas installations.

Sweden’s coastguard noticed the fresh damage to the pipelines earlier this week.

While neither pipeline was in use at the time of the suspected blasts, they were filled with gas that has been spewing out in the Baltic Sea since Monday’s ruptures.

The fourth leak was on the Nord Stream 2 pipeline, in close proximity to a larger hole found on the nearby Nord Stream 1.

A sharp drop in pressure on both pipelines was registered Monday and seismologists detected explosions, triggering a wave of speculation about who might have sabotaged one of Russia’s most important energy corridors.

The European Union said it suspected sabotage caused the damage to the Gazprom-led Nord Stream 1 and 2 pipelines in Swedish and Danish waters.

The White House has dismissed Russian allegations it was behind the incidents.

Russia’s top spy said that Moscow had intelligence indicating that the West was behind what he said was a ‘terrorist act’ against the pipelines.

The European Union suspects sabotage was behind the gas leaks on the subsea pipelines and has promised a ‘robust response’ to any intentional disruption of its energy infrastructure.

Meanwhile, Ukraine went as far as to say the natural gas leaks were a ‘terrorist attack’ by Moscow.

The Kremlin angrily denied any involvement in ‘sabotage’ adding that it was ‘absurd’ to conclude that Russia is behind any major gas leaks in the Baltic Sea.