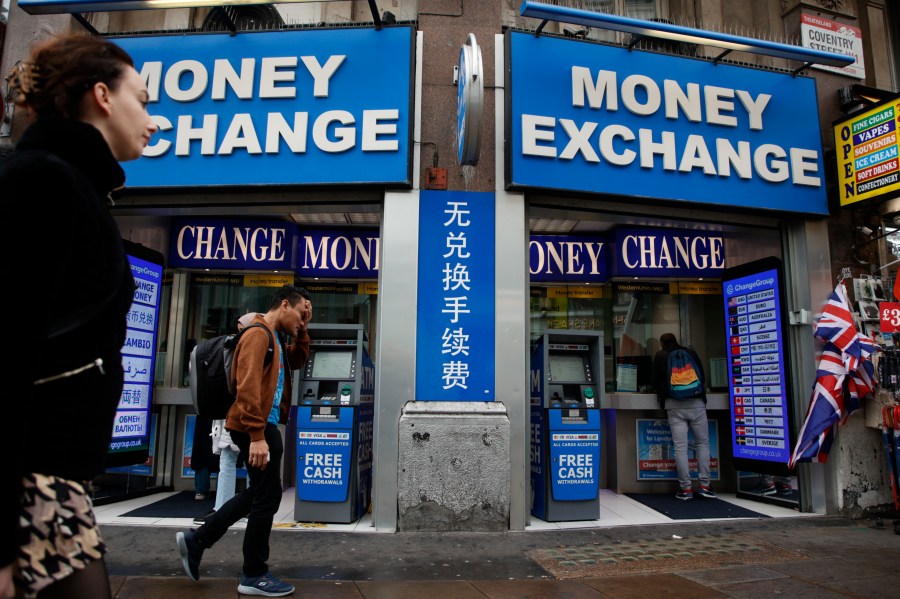 LONDON (AP) — The British pound stabilized in Asian trading on Tuesday after plunging to a record low a day earlier, as the Bank of England and the British government tried to soothe markets nervous about a volatile U.K. economy.

The instability began to have real-world impacts, with several British mortgage lenders withdrawing deals amid concern that interest rates may soon rise sharply.

The pound was trading at around $1.08 on Tuesday morning. On Monday it plunged to $1.0373, the lowest since the decimalization of the currency in 1971, on concerns that tax cuts announced Friday by Treasury chief Kwasi Kwarteng would swell government debt and fuel further inflation.

Late Monday the central bank said it was “closely monitoring’’ the markets and would not hesitate to boost interest rates when it next meets in November to curb inflation that is running at 9.9%.

The U.K. Treasury also sought to reassure markets, saying it would set out a medium-term fiscal plan on Nov. 23, alongside an economic forecast by the independent Office for Budget Responsibility.

The statements did little to ease misgivings about the government’s economic policies, with the pound staying well below the $1.12 level it held before Kwarteng’s announcement on Friday.

Some analysts warned that the statements from the bank and the Treasury were “too little, too late.”

“There is no rate increase today and speculators will enjoy the prospect of two months of Bank of England inactivity if the statement is taken at face value,” said Alastair George, chief investment strategist at Edison Group.

The government plans to cut 45 billion pounds ($49 billion) in taxes at the same time as it spends more than 60 billion pounds to cap energy prices that are driving a cost-of-living crisis.

Kwarteng and Prime Minister Liz Truss, who replaced Boris Johnson as prime minister on Sept. 6, are betting that lower taxes and reduced bureaucracy eventually will generate enough additional tax revenue to cover government spending. But many economists say it is unlikely the gamble will pay off.

Torsten Bell, who heads the Resolution Foundation, an economic think-tank focused on inequality, said the markets were looking at British government plans “and saying that is not what serious policymaking looks like.”

“The world we are heading for is a bumpy few weeks,” he told Sky News. Kwarteng “is now going to have quite a tough time because he has now set out plans to balance the books in November. That is going to be very hard.”