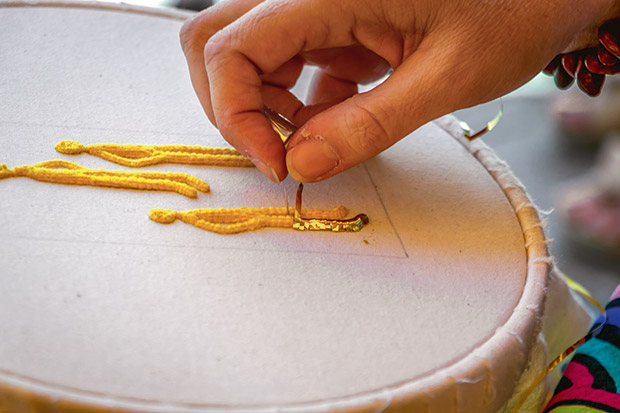 Some 2000 years ago, merchants hauled their treasures along Silk Road trade routes to the settlement of Bukhara, now the fifth-largest city in Uzbekistan. One can only imagine reaching the ancient Persian mecca after nothing but solitude and sand in the cruel-but-beautiful Kyzylkum Desert.

The fortified citadel has been revered by merchants, artisans, adventurers and scholars and, over the centuries, passed through the hands of Alexander the Great, the Turkic Khaganate, and even Genghis Khan. 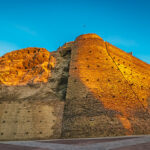 Fast forward a few millennia for a spectacle reminiscent of Bukhara’s past. For four days earlier this year, nearly 300 artists from around the globe unpacked their wares at the first-ever International Gold Embroidery and Jewelry Festival (known locally as the Zar Festival), a new biennial extravaganza aimed at developing gold embroidery and jewelry traditions in folk-applied arts. 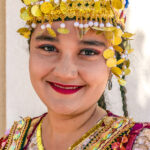 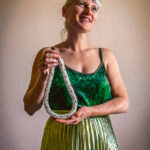 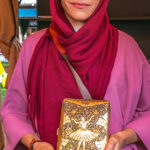 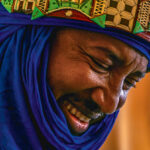 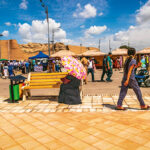 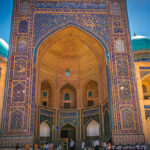 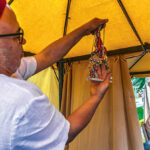 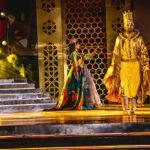 During the festival, the base of the ancient Ark of Bukhara came to life like a lively bazaar. The trio of New Zealanders waded through a kaleidoscope of colour, culture, and unusual materials. Sharing their techniques and watching others work, they also discovered kinship through a universal language older than Bukhara itself. When not teaching workshops or exhibiting her work, Jo has been known to work in the costume department for projects such as Mulan and the Lord of the Rings television series.

Crowds flocked to the New Zealand stall to see the goldwork of Jo Dixey, a Britain-born embroiderer who apprenticed at England’s Royal School of Needlework in the 1990s. Jo takes a contemporary approach to traditional needlework techniques, often combining metal threads with cotton. “She’s very good,” noted an Uzbek tutor (via an interpreter) when Jo began stitching in a workshop. Despite the language barrier, Jo felt their bond over technique was instant. 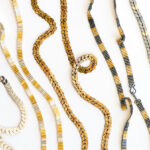 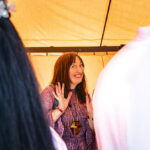 Jeweler Joanna Campbell, who teaches at Auckland’s Whitecliffe College and has helped accessorize films such as The Last Samurai, mixes sterling silver and 18-carat gold to mimic lace and textiles — like draped ribbon or a delicate string of sequins. Joanna’s wearable works look at home in Bukhara, where maximalist ornamentation is en vogue. Take only a few steps into the ancient city to see entrances embellished with ceramic tiles and elderly Uzbek women proudly wearing sparkles and colour. Joanna notes that the Modernist movement involved the rejection of ornamentation and decoration in Western culture, which is quite the opposite in Uzbekistan. 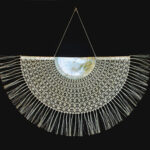 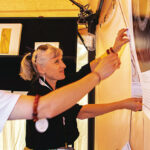 Northland artist Rowan Panther considers colonization and her heritage (Irish, English and Samoan) in her interpretation of traditional European lace-making, using contemporary shapes and motifs inspired by the wider Moana Oceania. Her wearable laces are crafted with muka, a raw fibre derived from harakeke (flax).