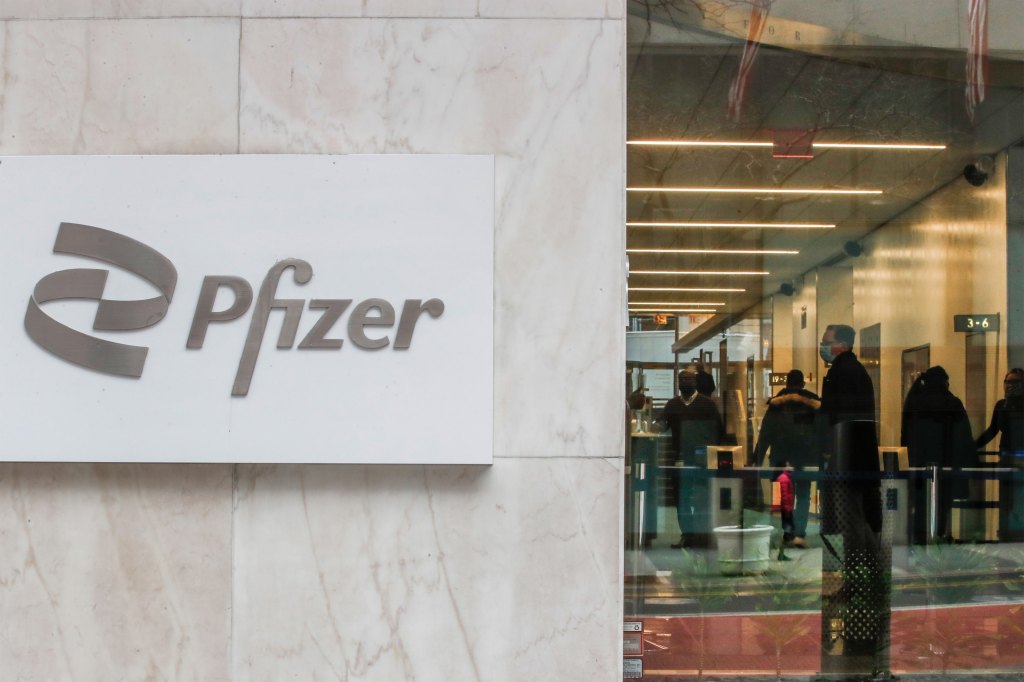 For drugmaker Pfizer, a fortune amassed in the covid pandemic is now paving the path to pharma nirvana: a weight loss pill worth billions.

The company has reaped nearly $100 billion from selling covid-19 vaccines and treatments to U.S. taxpayers and foreign governments. With that windfall, it plans to get richer, sinking the cash into developing and marketing potential blockbusters for conditions like migraines, ulcerative colitis, prostate cancer, sickle cell disease, and obesity.

It just announced it will triple or even quadruple the price of its covid vaccine once it goes on the commercial market next year. Meanwhile, the company is inundating doctors and pharmacists — and consumers — with advertising touting its covid drug Paxlovid.

“Pfizer is a remarkable marketing machine. They have an incredible ability to make the most of molecules and get them adopted,” said Timothy Calkins, a professor of marketing at Northwestern University’s Kellogg School of Management.

The federal government is helping Pfizer with its marketing, urging people to get boosters targeting the omicron variants, although early data has been mixed on whether the shots work better than the earlier version. But even with a 66% drop in covid vaccine sales in the past quarter, the company made about $4.4 billion in those three months. Pfizer has a deep stream of cash to finance its future. Covid has been very good for business.

The company appears most excited — judging from its messages to investors — about two experimental diabetes pills, “me too” drugs in the class known as GLP-1 agonists. As Pfizer competitors have already discovered, they double as weight-loss drugs. In one trial, more than half of obese patients on a high-dose Eli Lilly and Co. injectable lost a fifth of their body weight — results that have raised the drugs’ cachet as a diet aid in Hollywood, Silicon Valley, and other social niches where cost is no issue and being thin is always in.

Wall Street analysts are predicting such massive demand for these drugs that Pfizer “can find a place there with marketing” if its version works, though it is at least two years from licensure, said Mohit Bansal, a Wells Fargo analyst. By 2035, the Lilly drug alone could earn $100 billion a year for its formulation, according to one Bank of America analysis.

Pfizer still sees covid as a “multibillion-dollar franchise” long term, Chief Financial Officer David Denton told a Nov. 1 earnings call, since covid “is going to be somewhat like a flu, sustained flu, but actually more deadly than the flu.”

The company announced Oct. 20 that it would charge $110 to $130 a shot once government contracts run out next year, more than double what investors were expecting. The U.S. government paid $30.50 per shot in its latest contract with Pfizer, according to Zaid Rizvi, a researcher for the advocacy group Public Citizen.

Pfizer was a good citizen in keeping prices down during the worst of the pandemic, CEO Albert Bourla told investors. Now payers will pick up the added cost, while consumers “wouldn’t see the difference” because there’s generally no copay for vaccines.

Still, unless new mutations are dangerous enough to scare enough people, Wall Street analysts expect sales to lag, as the public loses interest, Republican politicians discourage booster shots, and concerns continue about rare heart damage in young people getting the shots. Pfizer said in July it had taken “a $450 million write-off of inventory related to covid-19 products” that exceeded “approved shelf-lives.” And Moderna on Nov. 3 lowered sales predictions for its covid vaccine.

“Not many people are going to go out and get their fourth, fifth, and sixth boosters if there’s no major new variant,” said Geoff Meacham, an analyst at Bank of America. “If you’ve had the two mRNAs and a booster, you are pretty well protected. Do you need it annually?”

That lagging interest in covid products has investors pushing Pfizer to show where it can make up revenue for three bestsellers — the breast cancer drug Ibrance, the rheumatoid arthritis drug Xeljanz, and Eliquis, a blood thinner — whose patents run out this decade.

While conducting its own research, Pfizer fattened its development portfolio in the past two years by buying companies that already had developed promising drugs. The company hopes these purchases, and its own work, will give it $25 billion in new annual revenue by 2030.

Meanwhile, the company has treated investors to $25 billion in dividends over the past three years and spent $9 billion jacking up share prices with stock buybacks.

All this is due to the huge profit bulge from its covid products, which has enabled Pfizer to outpace Johnson & Johnson as the biggest industry revenue earner so far in 2022. From late 2020 through September, Pfizer earned about $80 billion from sales of 3.8 billion covid vaccines and Paxlovid, and the company expects an additional $15 billion in the remainder of this year. Until recently, investors had been predicting that number would fall to around $11 billion annually by 2026, but Pfizer’s recent commercial pricing announcement increased that figure, potentially, by up to $3 billion, according to a Wells Fargo analysis.

Still, “from the investor’s point of view, the focus is not on covid as much at this point. The focus is, what do they do with this money and expertise?” Bansal said, and how to “use it to grow their core business.”

To grow that core, Pfizer since last year has acquired several midsize companies with promising or licensed drugs. It spent $11.6 billion for Biohaven, whose migraine drug Nurtec ODT brought in $324 million in the first half of 2022. Pfizer predicts up to $6 billion in annual revenue from the drug.

Its hopes are also high for Oxbryta, a sickle cell anemia drug produced by Global Blood Therapeutics, which Pfizer bought for $5.4 billion. Priced at $125,000 a year, the drug, which raises oxygen levels in patients, earned $100 million in the first two quarters of the year but might be worth $2.5 billion annually with a powerful marketing engine behind it, according to Wall Street analysts.

Pfizer is strengthening its franchise in respiratory vaccines and treatments, Dr. Mikael Dolsten, the chief scientific officer, said on the Nov. 1 call. It’s racing against GSK and Moderna to be first to license a vaccine that protects older adults as well as pregnant women and their newborns against RSV, a respiratory virus that has overwhelmed children’s hospitals this fall. The company also has released an updated version of its bacterial pneumonia vaccine, which brought in $5.3 billion in 2021.

The other mRNA vaccine companies are also rolling in cash but have narrower strategies. Moderna is testing 32 infectious-disease vaccines and developing a long-shot individualized cancer vaccine. Pfizer’s German partner, BioNTech, which did most of the original development of their covid vaccine, has a similar focus.

Pfizer and Moderna both began advanced clinical trials this year for their first non-covid mRNA vaccines — against influenza. If flu season is widespread enough, the tests could show whether the vaccines are any better than standard flu shots, and whether one works better than the other.

Nurtec, the migraine drug it acquired with Biohaven, will be a good test case. Pfizer and giants like it each have at least 2,000 sales reps marketing to primary care physicians in the United States, Calkins said. An operation like that probably costs $400 million a year, he said, far more than a company like Biohaven could afford.

Pfizer will use its marketing prowess, particularly among primary care physicians, to “build the world’s leading migraine franchise,” CEO Bourla said on the Nov. 1 call. Pfizer has the resources to flood the media with direct-to-consumer ads and negotiate with insurers and pharmacy benefit managers to make sure patients can get this and other drugs, said Bansal, the Wells Fargo analyst.

Sickle cell patients are harder to reach, but Pfizer “has relationships in the hospital setting, the heft of their investment in commercialization” to increase sales of Oxbryta, said Evan Seigerman, a research analyst at BMO Capital Markets.

Pfizer also plans to make a blockbuster of etrasimod, an experimental drug against ulcerative colitis that it acquired with its $6.7 billion purchase of Arena Pharmaceuticals.

Pfizer’s GLP-1 formulation is key to its goals. The GLP-1 drugs are similar to a gut peptide, or small protein, that stimulates biochemical pathways that help release insulin, diminish appetite, and lower certain immune responses. While the drugs were invented and licensed to fight Type 2 diabetes, the FDA has approved one of them for obesity treatment as well, and companies are testing GLP-1 formulations against fatty liver disease, sleep apnea, kidney disease, congestive heart failure, and even Alzheimer’s and Parkinson’s.

Pfizer executives said they hope to decide by 2024 which of two candidate drugs to take into large clinical trials. The company sees itself finding a niche with a pill that can be taken with or without food, according to Dolsten. Most of the current products are injectables, which turn off many people.

Assuming one of the drugs gets licensed, marketing will do the rest.