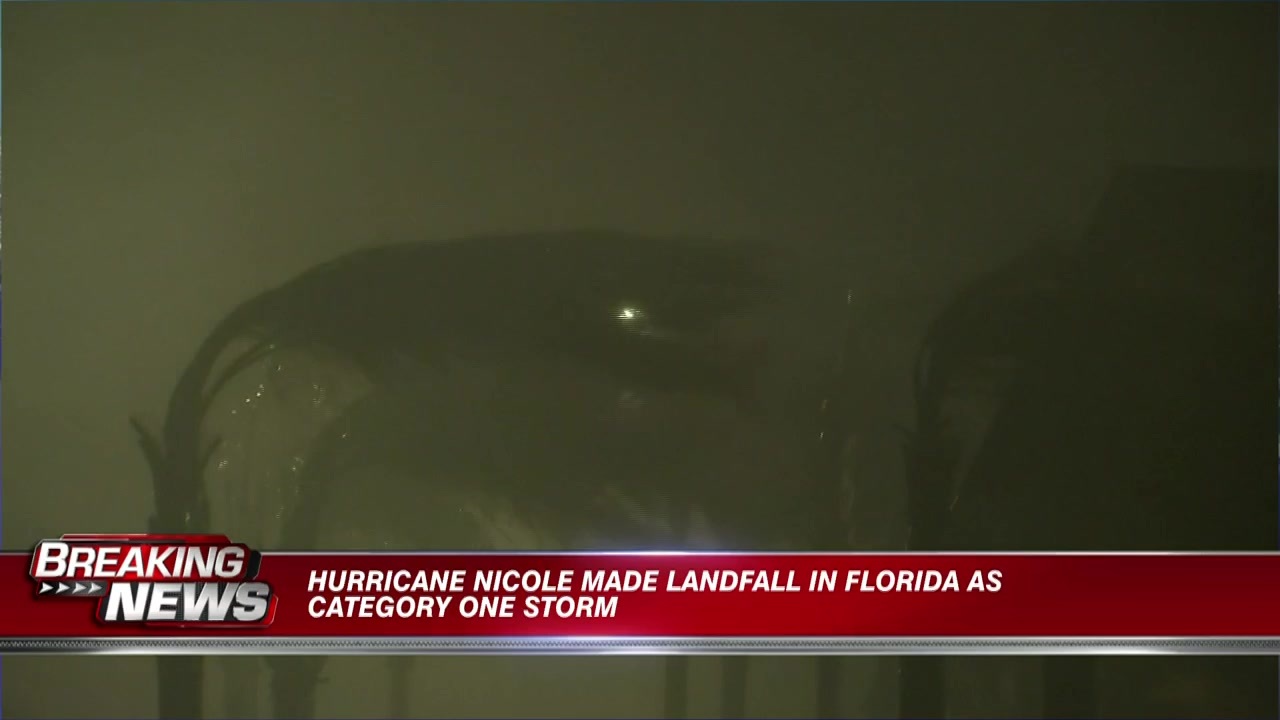 (CNN) — Nicole has weakened to tropical storm after making landfall as a Category 1 hurricane along the east coast of Florida early Thursday morning, lashing the region with heavy rain and dangerous storm surge as it became the first hurricane to strike the US in November in nearly 40 years.

The storm struck just south of Vero Beach with winds of 75 mph before weakening to a tropical storm shortly after, the National Hurricane Center said. It’s bringing strong winds and heavy rainfall to some areas hit by Hurricane Ian less than two months ago.

Nicole’s colossal path has led to evacuations from some residential buildings deemed unsafe and at risk of collapse due to the storm’s impact. In addition to the cancellation of hundreds of flights and the shuttering of amusement parks, many schools, colleges and universities closed ahead of the storm.

Nicole’s colossal path has led to evacuations from some residential buildings deemed unsafe and at risk of collapse due to the storm’s impact. In addition to the cancellation of hundreds of flights and the shuttering of amusement parks, many schools, colleges and universities closed ahead of the storm.

In Volusia County, officials told people to leave more than 20 buildings found to be structurally unsound due to Ian’s impact in late September.

“There is a strong potential that one or more buildings will collapse during the storm,” Volusia County Sheriff Mike Chitwood told CNN affiliate WESH-TV on Wednesday. “Right now, ground zero is here.

“We don’t want to end up like Surfside,” Chitwood added.

Part of Champlain Towers South in Surfside, Florida, crumbled to the ground in summer 2021, killing 98 people. The collapse was not storm-related.

Nicole, which also threatens to whip up tornadoes, is expected to weaken to a depression early Friday and become a post-tropical cyclone over the Southeast.

“Weakening will occur while Nicole moves over Florida,” forecasters at the hurricane center said.

On Wednesday evening, Nicole strengthened from a tropical storm into a hurricane, smashing into Grand Bahama Island with strong winds and dangerous storm surge, the National Hurricane Center in the US said. The Abacos, Berry Islands and Grand Bahama Island in the northwestern Bahamas remained under hurricane warnings early Thursday.

Because Nicole is a large storm, its impact will be felt well beyond its center, according to forecasters, who explained that people in its path should not focus on the exact track to prepare.

Here’s what to know:

Millions under hurricane warning: More than 5 million people are under hurricane warnings. Up to 8 inches of rain can drench eastern, central and northern portions of Florida. Plus, between 2 to 6 inches are expected from parts of the US southeast to the southern and central Appalachians and western mid-Atlantic through Friday, the hurricane center said.

Historic hurricane: Nicole’s landfall Thursday was historic because it became the latest in a calendar year a hurricane has ever struck Florida’s Atlantic coast. The storm’s landfall broke a previous record set by the Yankee Hurricane, which hit Florida’s east coast on November 4, 1935.

Unsafe buildings: Ahead of Nicole’s expected landfall in Florida, officials asked people to evacuate buildings deemed unsafe to withstand the storm. In New Smyrna Beach, officials determined some condos are unsound due to the erosion of a sea wall. And in Daytona Beach Shores, which is still reeling from Hurricane Ian’s impact, at least 11 buildings are at risk of collapse, according to Public Safety Department Director Michael Fowler. Volusia County officials evacuated 22 single homes deemed unsafe in the unincorporated area of Wilbur-by-the-Sea.

South Carolina should prepare: People across the state should prepare for the likelihood that Nicole could bring heavy rain and winds. “Given the uncertainty of the storm’s strength and path as it approaches South Carolina, residents need to have their personal emergency plans ready to go just in case we need to take safety precautions later in the week,” said Kim Stenson, who heads the state’s emergency management division.