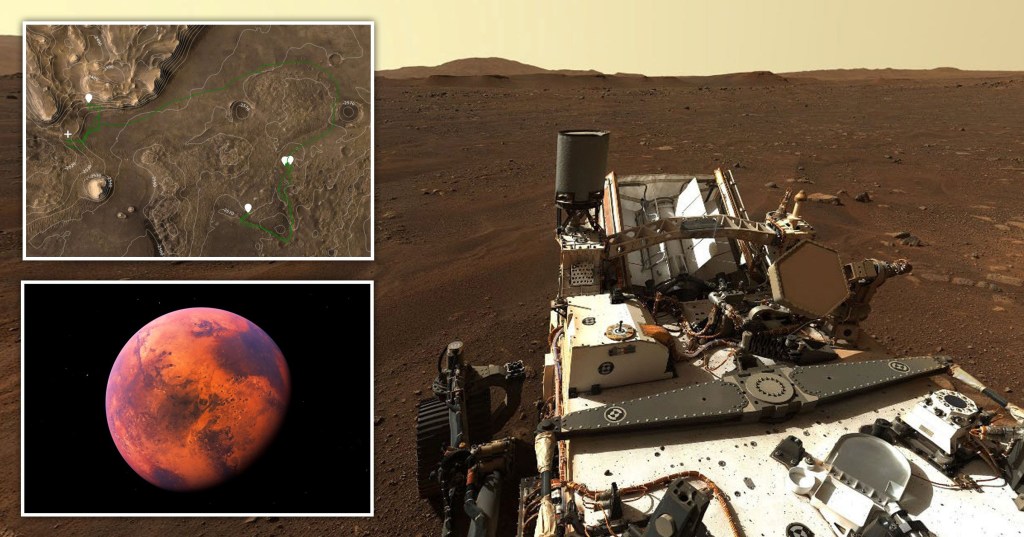 You can now visit Mars from the comfort of your own own home using a new interactive map.

Budding astronauts can experience the sights and sounds of the red planet using virtual reality, a laptop, or their phone.

The vast map encompasses the areas surrounding the landing site of Nasa’s Mars 2020 Perseverance rover on the Jezero Crater.

Users can stand on top of the rover at ground level – just like street view in Google Maps – and stare across the surrounding desert landscape.

Steep slopes can be traversed and views can be taken in from large scales to centimetre-close detail.

People can also select higher altitudes and watch the mountainous terrain with recordings of the desolate planet in the background.

Real 3D panoramic views have been combined with synthetically created orbital imagery and terrain data to create the online map.

Single images from the Mastacam-Z camera onboard the Mars 2020 Rover Perseverance have also been stitched together to form an easily accessible web-browser vision of the planet.

The sounds were recorded by the SuperCam instrument on the same rover mission.

The map was released at the Europlanet Science Congress (EPSC) 2022 in Granada, Spain, by Sebastian Walter of the Freie Universität Berlin.

Mr Walter said: ‘Some of the slopes are pretty steep, so watch out for those if you want to avoid too much oxygen consumption.

‘To get a real feeling of what to expect on your future Mars trip, you can click on one of the waypoint marker symbols to enter either a full screen 3D view or, if you have a Virtual Reality setup, to enter a fully immersive environment.

‘You can even listen to the sounds of the rover if you stand close by, but please don’t touch it – otherwise you would contaminate the probes.’

Users staring at the ‘Hogwallow Flats’ terrain will see the remains of a delta from a river that flowed into Lake Jezero 3.5 billion years ago.

They will also see a white shingle between the dust, and some of the sedimentary rocks in the Jezero Crater.

Paleo lake is a quieter stopping point – users can look over a recreated expanse of water plotted by suspected ancient lake shorelines while listening to the planet’s low hum.

The Jezero map builds on the European Space Agency (ESA)’s Mars Express mission which has tried to bring three-dimensional images of Mars to the internet since 2004.

The other portion comes from the Mars Reconnaissance Orbiter, Nasa’s spacecraft sent to Mars to study geology in 2005.

The map is the perfect tool for planning a future visit to Mars, with an interactive interface where you can choose from different available base datasets.

Get in touch with our news team by emailing us at webnews@metro.co.uk.For more stories like this, check our news page.