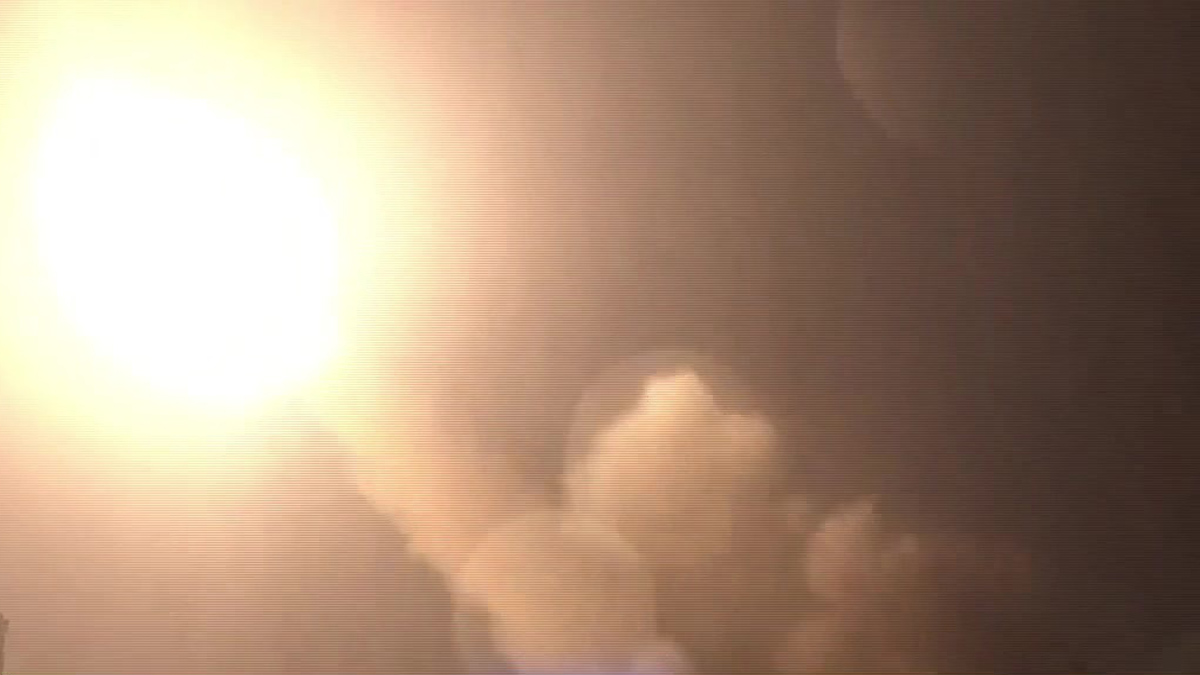 THIS IS A BREAKING NEWS UPDATE. AP’s earlier story is below:

North Korea launched two short-range ballistic missiles toward its eastern waters Thursday after the United States redeployed an aircraft carrier near the Korean Peninsula in response to Pyongyang’s previous launch of a nuclear-capable missile over Japan.

The latest missile launches suggest North Korean leader Kim Jong Un is determined to continue with weapons tests aimed at boosting his nuclear arsenal in defiance of international sanctions. Many experts say Kim’s goal is to eventually win U.S. recognition as a legitimate nuclear state and the lifting of those sanctions, though the United States and its allies have shown no sign of allowing that to happen.

The latest missiles were launched 22 minutes apart from the North’s capital region and landed between the Korean Peninsula and Japan, South Korea’s Joint Chiefs of Staff said in a statement. The first missile flew 350 kilometers (217 miles) and reached a maximum altitude of 80 kilometers (50 miles) and the second flew 800 kilometers (497 miles) on an apogee of 60 kilometers (37 miles).

He added that the second missile was possibly launched on an “irregular” trajectory. It is a term that has been used to describe the flight characteristics of a North Korean weapon modeled after Russia’s Iskander missile, which travels at low altitudes and is designed to be maneuverable in flight to improve its chances of evading missile defenses.

The U.S. destroyer is part of the strike group led by the nuclear-powered aircraft carrier USS Ronald Reagan, which returned to the waters in what South Korea’s military called an attempt to demonstrate the allies’ “firm will” to counter North’s continued provocations and threats.

The strike group was in the area last week as part of previous drills between South Korea and the United States, and the allies’ other training involving Japan. North Korea considers such U.S.-led drills near the peninsula as an invasion rehearsal and views training involving a U.S. carrier more provocative.

South Korea’s military said it has also boosted its surveillance posture and maintains readiness in close coordination with the United States. The U.S. Indo Pacific Command said the launches didn’t pose an immediate threat to United States or its allies, but still highlighted the “destabilizing impact” of North Korea’s nuclear and ballistic missile programs.

The launches were North Korea’s sixth round of weapons tests in less than two weeks, adding to a record number of missile launches this year that has prompted condemnation from the United States and other countries. South Korean officials said the North may up the ante soon by testing an intercontinental ballistic missile or conducting its first nuclear test explosion since 2017, escalating an old pattern of heightening tensions before trying to wrest outside concessions.

On Tuesday, North Korea staged its most provocative weapons demonstration since 2017, firing an intermediate-range missile over Japan, forcing the Japanese government to issue evacuation alerts and halt trains.

Experts said the weapon was likely a Hwasong-12 missile capable of reaching the U.S. Pacific territory of Guam and beyond.

Other weapons tested in recent days included Iskander-like missiles and other ballistic weapons designed to strike key targets in South Korea, including U.S. military bases there.

North Korea’s Foreign Ministry said in a statement Thursday that the redeployment of the Reagan strike group poses “a serious threat to the stability of the situation on the Korean peninsula and in its vicinity.” The ministry said it strongly condemns U.S.-led efforts at the U.N. Security Council to tighten sanctions on the North over its recent missile testing, which it described as a “just counteraction” to joint U.S.-South Korean drills.

After the North’s intermediate-range missile launch, the United States and South Korea also carried out their own live-fire drills that have so far involved land-to-land ballistic missiles and precision-guided bombs dropped from fighter jets.

But one of the tit-for-tat launches nearly caused catastrophe early Wednesday when a malfunctioning South Korean Hyumoo-2 missile flipped shortly after liftoff and crashed into the ground at an air force base in the eastern coastal city of Gangneung. South Korea’s military said no one was hurt.

After Tuesday’s North Korean launch, the United States, Britain, France, Albania, Norway and Ireland called for an emergency meeting of the U.N. Security Council. But the session Wednesday ended with no consensus, underscoring a divide among the council’s permanent members that has deepened over Russia’s war on Ukraine.

Russia and China during the meeting insisted to fellow Security Council members that U.S.-led military exercises in the region had provoked North Korea into acting.

The United States and its allies expressed concern that the the council’s inability to reach consensus on North Korea’s record number of missile launches this year was emboldening North Korea and undermining the authority of the United Nations’ most powerful body.

North Korea has fired more than 40 ballistic and cruise missiles over more than 20 launch events this year, using the stalled diplomacy with the United States and Russia’s war on Ukraine as a window to speed up arms development.