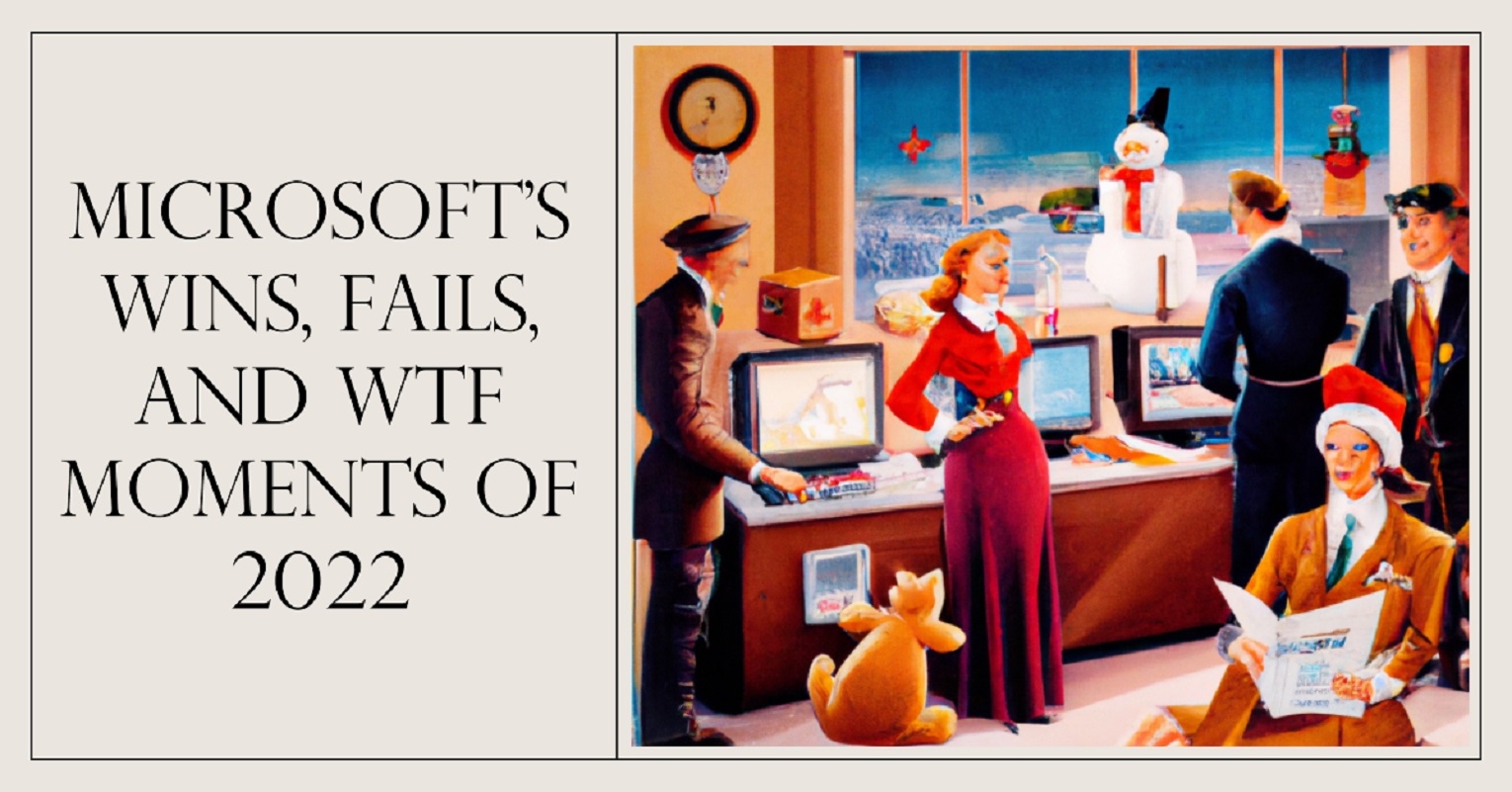 It’s not unexpected to think that, after two years of a global pandemic that bounced employees and workers and supply chains around like billiard balls, that 2022 would be a little weird. And for Microsoft, it was: confusing, a bit random, but full of some unexpected successes.

Microsoft’s Surface division? Dull, but with a few sparks of life. Windows? Unexpectedly strange. As for the rest of it…yes, we definitely scratched our heads. As we sit next to our glowing monitor, a glass of (fortified?) egg nog next to our mousepad, here’s the wins, fails, and WTF? moments of Microsoft’s 2022.

We were one of the few publications that actually liked the Surface Pro 9 (5G), an Arm tablet that still suffers from some of the compatibility issues of its forebears. But the Surface-on-Arm premise has always been to power a few key Microsoft apps: Edge, Office, Teams, and so on. In this, the Surface Pro 9 (5G) performs well enough to earn our seal of approval.

We’ve criticized Windows on Arm devices before because of their performance issues, in part because if you wander too far afield, the anemic processor performance combined with compatibility issues can deliver a subpar experience. It’s a little weird to reserve the 5G option for just the Arm platform, but the choice doesn’t really diminish the Surface Pro 9 experience.

Underneath the Surface Pro 9 (5G), however, is a head-scratching mess. Qualcomm, the so-far exclusive provider of Windows-on-Arm PC hardware, is currently embroiled in a patent suit with its IP provider, Arm, which still hasn’t been settled.

Qualcomm Snapdragon processors don’t have a sparkling reputation in the PC space — see the Surface Pro 9 (5G) above. The next-gen Arm designs that Nuvia brought with them are being challenged in court by Arm, which says they’re not covered by Qualcomm’s license agreement. Those Nuvia chips are due in late 2023, anyway, months after Intel and AMD are scheduled to ship mobile processors that will probably drastically outperform the new Snapdragon chips. Qualcomm still has its stellar phone business to fall back on, but for Windows on Arm? A real catastrophe in the making.

Microsoft keeps taking swings at budget laptops and they keep coming up a little short. At $799.99, the Surface Laptop Go 2 couldn’t quite deliver what an Asus or Acer can in terms of a quality budget laptop. But it’s also unfair to say that it fell dramatically short of what those other manufacturers offered. But Microsoft did include a full-fledged version of Windows in it, added a (last-generation) 11th-gen Core chip, and eventually dropped the price to $649.99 for the holidays.

We still think that consumers would be best served to look elsewhere, but Microsoft knows what it needs to accomplish in this space and seems to be working toward addressing it. We think it’s a bit late for our purposes, but if Microsoft can keep taking cost out, it’s likely the Surface Laptop Go 3 will be a true winner.

The Surface Laptop SE was yet another attempt to take on a budget PC or a Chromebook. Microsoft said that it would ship the Laptop SE in early 2022 alongside some similar third-party hardware and a simplified version of Windows 11, Windows 11 SE. Though a handful of sites reviewed Microsoft’s new laptop, it vanished into a black hole afterwards. Or maybe it was the Bermuda Triangle?

Microsoft’s hasn’t said so, but designing for disabilities is reminiscent of the space race: By solving problems that you’d normally ignore, you learn more than you otherwise would. Take the Adaptive Mouse, for example– by swapping the thumb support, you can turn a right-handed mouse into one for lefties. That’s simply impressive.

Microsoft’s HoloLens began dying the moment the company migrated away from the consumer to the enterprise — sorry, Microsoft. But 2022 was apocalyptic as far as Microsoft’s AR headset was concerned: after delays pushed back operational testing from 2021 to May 2022, a Defense Department report concluded that the devices needed further refinement before they could be used by the U.S. Army. That could put Microsoft’s $22 billion contract on hold.

And while early 2022 was spent playing he-said, she-said over whether the HoloLens 3 would be cancelled, it certainly didn’t help that HoloLens lead Alex Kipman was said to have inappropriately behaved toward women. Kipman is no longer with the company. With Kipman gone and the DoD contact on the ropes, the HoloLens is one major headache for Microsoft — ironically, one of the DoD’s chief complaints against using it.

Playing games? Great. Playing games with friends? Even better. But playing games over Microsoft Teams? Er, what? Yes, if multiplayer Minesweeper is your thing, you can now play multiplayer games while your next Teams conference call takes place. (You know Elon Musk would use this as a training exercise and fire the engineer who tripped over the bomb.) And yes, you can even break the whole concept of a solitary Solitaire and play that with your friends, too. Are the Teams team out of ideas?

The free consumer version of Teams continues to fail, by the way. Communities just won’t save it.

Windows 10 entered the market on the shoulders of an ambitious creative effort, with everything from mixed reality to a dynamic mobile platform to a whole host of creative apps — all of which largely bombed. Shell-shocked, Microsoft returned to its winning strategy, productivity apps that just make money.

In 2021, however, Microsoft bought Clipchamp, a Web-based video-editing platform — and boy, what a breath of fresh air it has been. I adore Clipchamp. It’s simple, fun, powerful, and a joy to use. It’s a tool and an approach that needs to be tried to be appreciated, and should be used to signal to Microsoft that we need to seed Windows and Microsoft 365 with even more creativity. This is clearly one of Microsoft’s biggest successes of 2022, and one I hope that the company can build upon going forward.

And build upon they did. The rise of AI art (and AI in general) has been as fundamentally unsettling as it has been rapid, with major potential changes coming to art, design, writing, and even the structure of the Internet as a whole. But what AI art excels at is simply offering up a custom piece of art on spec. The downside? It doesn’t always deliver as promised, and there are usually limits (or an outright price) attached to how many requests you can make.

Designer takes AI and integrates it into the creative process, quickly and efficiently. Our preview of Microsoft Designer shows that Microsoft built AI art neatly into its workflow — and does it with (from what we’ve seen) virtually no limits on the generative process. If you want to try out 100 different images in your brochure, feel free. About the only thing you can’t do yet is simply generate AI art outside the creative workflow — but you will, with Image Creator for Microsoft Edge. (Image creator probably isn’t quite live yet, but you can check.)

We haven’t used the ink-first version of OneNote, Microsoft Journal, extensively. But rave reviews at the Microsoft Store imply that there’s a creative renaissance going on within Redmond.

It’s not bad, anyway. After years of being fed next to nothing, Microsoft took a swing at a substantial update… and drew a walk. Most of the nifty features of the Windows 11 October 2022 Update lie underneath the surface, with Live Captions providing a genuinely noteworthy accessibility feature and the Snap Bar reworking Snap for multiple monitors. Clipchamp rocks. So does Windows Spotlight. But, seriously, does dragging and dropping a file onto the taskbar actually work for anyone else?

The fact that Microsoft had to issue an update to the Update to deliver additional features, though….

Microsoft, however, has given all of that up. Now, Microsoft will add new Windows features whenever it feels like it, on its own schedule. Twice a year? A dozen times a year? Who knows? Furthermore, the company is simply quietly pushing them out to Windows PCs, without fanfare. Don’t get us wrong, we’re fans of new features and innovation for innovation’s sake. But if you’re going to change how a PC works, why not tell people about it? Most app developers use a changelog to inform users of new updates. Microsoft? Nah.

Microsoft issued its first patch to the Windows 11 2022 Update this past October, which normally would be called the Windows 11 October Update (22H2) except that the name was already taken, except that it wasn’t. Nor did Microsoft stick to the “moment” moniker that apparently is being used internally to describe the new features. Instead, they’re being referred to as “experiences.”

It all feels like an English teacher cooped up their apartment during quarantine, simply turning on the screen reader on a PDF for a Zoom call and calling it a day. (Yes, that was indeed curiously specific.) But these weren’t new features, just a set of makeup features that the Windows team apparently submitted for course credit.

Hey, we like them — tabbed File Explorer browsing is actually quite useful, though simple — but we’d appreciate a bit more formality to the whole process. Just semi-randomly launching stuff sounds like something we might see at Twitter, not a corporation run by adults. At least you have until 2025 to run Windows 10. Or maybe Windows 12?

We kid, we kid. Happy holidays to Microsoft and to all of you, from PCWorld. Here’s to 2023!