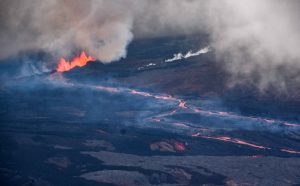 To his left, at the summit of Mauna Kea, he saw snow for the first time. Looking to his right, he saw another first, bright orange molten rock spewing out of Mauna Loa and down its massive slopes.

“You are lucky. … You are witnessing history,” Wells told Ian and his family.

Tourists who already were on the Big Island late Sunday night when Mauna Loa erupted for the first time in 38 years soon realized their timing was indeed lucky.

Watching glowing red and orange lava flowing down the world’s largest active volcano is an experience of a lifetime. But for would-be-tourists who are far away, an erupting volcano can sound scary.

The Hawai’i Tourism Authority and Hawai’i County are working to get the word out that the current location of the lava flow is in a remote area with no imminent threat to people or property — and scientists do not expect it to become a danger.

“There is no better time to come to the Big Island,” Mayor Mitch Roth said Friday.

Several flights were canceled to Hilo immediately after Mauna Loa erupted, when little was known about how bad it would be. But by the end of the first day of the eruption, on Nov. 28, airlines already were resuming their normal schedules to the Big Island’s two major airports: Ellison Onizuka Kona International Airport at Keāhole (KOA) and Hilo International Airport (ITO).

T. Ilihia Gionson, public affairs officer for the Hawai’i Tourism Authority, said Friday the agency does not have solid numbers about how the eruption has affected tourism to the Big Island or the Aloha State but it has been getting a lot of questions.

“Is it still safe to come? Yes it is. Should I change my plans? No you shouldn’t,” Gionson said. “Other than that, tourism has had a really robust recovery, especially on the neighbor islands, including Hawai’i Island. So, too early to tell if there’s any kind of big trends, but that’s what we got so far.”

The Hawaiʻi Tourism Authority is putting out regular updates with tourism-related information about the eruption.

The biggest concern is the lava flowing across Saddle Road, cutting off the main east-west corridor that connects the population centers of Kailua-Kona and Hilo. On Saturday, the leading edge of the lava was about 2.5 miles away and moving very slowly.

But with all communities out of harmʻs way, erupting Mauna Loa, with its glowing red and orange lava flowing down the northeastern flank, has become a worldwide tourist attraction — especially at night.

Companies like Blue Hawaiian are striking when it’s hot, offering a new, one-hour “Mauna Loa Eruption tour.” The company also has a longer 1-hour and 45-minute tour that includes a stop at a breathtaking waterfall and flight over the lava flow.

“Itʻs amazing. We’re taking guests to see something that hasn’t happened for 40 years and who knows if it will ever happen again in our lifetime,” said Quentin Koch, CEO and President of Blue Hawaiian. “To have people from all around the world come to see history in the making is truly a chance of a lifetime.”

Wells, a pilot with Blue Hawaiian for eight years, said the eruption of Mauna Loa already is more more expansive that the 2018 eruption of nearby Kīlauea.

“There are two main flows and they are kind of spidering in different areas and flowing,” Wells said. “I can tell they are much wider and deeper but not as fast.

“Itʻs here right now and who knows when it might be gone. Lava cools quickly and some of the flows already have a layer of hardened lava, that black stuff that is still close to 600 degrees Celcius. Underneath it is orange, still flowing. … I love how excited people get to see it.”

Hawai’i Volcanoes National Park spokeswoman Jessica Ferracane said the park is operating with normal hours, and all ranger programs, events and other activities planned at the park are still happening. They include the Kamehameha Schools Holiday Concert on Dec. 10, the Discover Your Park Through ʻŌlelo Hawaiʻi program Dec. 11 and a performance by Grammy and Nā Hōkū Hanohano award-winning artist John Keawe on Dec. 14.

Ferracane also said the national park is a great place to view two volcanoes erupting at the same time. Kīlauea also is spewing lava, within the Halemaʻumaʻu crater.

Simultaneous eruptions of both volcanoes used to occur regularly before 1924, when Kīlauea was continuously active. But now it is rare. According to the U.S. Geological Survey (https://pubs.usgs.gov/gip/hawaii/page15.html), the only post-1924 occurrence of dual eruptions was in March 1984, the last time Mauna Loa erupted before Sunday.

The Hawai’i Tourism Authority reminds visitors that viewing conditions can change at any time depending on eruptive activity and weather conditions such as fog or rain. Consider factors such as viewing experience, long waits and crowds, hiking ability, and available time when selecting where to view the eruption. Check out the park map and download the new NPS mobile app to help you navigate during your visit.

“People are delighted to see the dual eruption, but I think Mauna Loa and the new county area, that’s kind of where the drama is right now so that’s where probably most of the visitors are going,” Ferracane said.

The new county area she is referring to is a 4.5-mile, one-way route through Pōhakuloa Training Area land, where people can safely park and get out of their cars to view the lava flowing down Mauna Loa. It was set up in response to the congestion and traffic accidents that were being caused by thousands flocking nightly to Saddle Road to see the eruption.

Nearly 5,500 vehicles went through the new lava viewing route the first two nights of its operation. There were also steady streams of people going into Gilbert Kahele Recreation Area, directly across the highway from the lava viewing route’s entrance.

“It allows people to go through safely, off the highway and view the lava,” Roth said of the new viewing route. “I was through there [Thursday] night. It’s actually the best viewing available; it’s a safe place to go.”

Amy Phillips, the public information officer for Pōhakuloa Training Area, couldn’t agree more. She said during the press conference Thursday that people are still wandering off the new viewing route and onto the U.S. Army training area’s lands in the dark.

“That is very dangerous, even in the daylight,” Phillips said. “Do not do that. Stay on the designated route the County has established.”

The mayor did not see many people parked on the side of the highway Thursday night and traffic was flowing quite well, although there were some issues Friday night due to fog obstructing the views of the lava flow, causing people to not move through the area as quickly.

The Hawai’i Tourism Authority also warns that people who suffer from asthma, emphysema, COPD or other types of breathing problems should take precautions to avoid the ash and vog that are characteristic of volcanic eruptions. At this time, the vog is remaining mostly high in the sky and not mixing much with air on the ground.