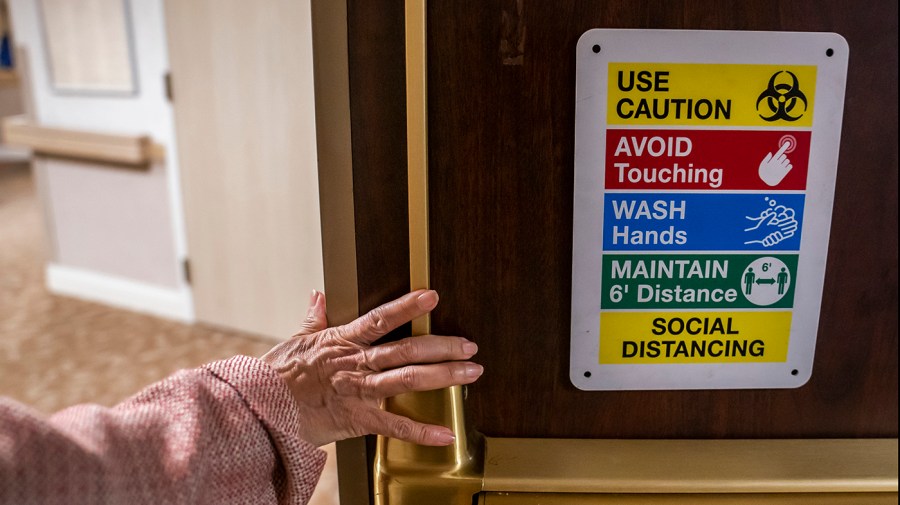 COVID-19 infections and hospitalizations are on the rise, posing a major threat to nursing home residents and staff who are not up to date on their COVID-19 vaccinations.

Less than half of all nursing home residents and less than a quarter of staff have received a bivalent booster shot, according to federal data. As the coldest months approach, the low vaccination rates portend a difficult and potentially deadly winter.

Hospitalizations have increased more than 25 percent in the past two weeks, primarily driven by older Americans and those with underlying health conditions.

A KFF analysis of federal data showed only 45 percent of nursing home residents and 22 percent of staff were up to date with their COVID-19 vaccines just ahead of Thanksgiving. The rates are much higher than the general population, but much lower than the industry would like.

“It’s a surprising finding, because such a high share of residents did get their primary vaccine series,” said Priya Chidambaram, a senior policy analyst at KFF and one of the authors of the analysis.

“The national story does seem to be that the rates are pretty low,” Chidambaram said.

The elderly population is also most at risk from other respiratory viruses like influenza and respiratory syncytial virus, which are seeing extremely high rates of transmission much earlier than in past years and straining hospitals across the country.

Those viruses can compound the risks from COVID-19, which is why health experts said it’s crucial for nursing home residents and staff to be current with their vaccinations.

“The prospect of not being able to get into a hospital when you need it is scary,” said Katie Smith Sloan, president of LeadingAge, which represents nonprofit nursing homes. “We’re dealing with flu season colliding with the holidays, and it’s the perfect storm.”

The Biden administration recently launched a year-end sprint to improve lagging COVID-19 vaccination rates, with a focus on nursing facilities.

The new combination booster shot targets both omicron and the original strain of the virus, and recent research has shown it can provide protection against the new omicron subvariants currently circulating, which are proving to be especially adept at evading immunity.

But experts and industry groups said the barriers nursing homes are facing have not changed since the first round of boosters last year, including pandemic fatigue, mixed messaging about the vaccine’s effectiveness and strict requirements about vaccine administration.

“It’s incredibly disheartening to see rates this low given all the efforts that we’ve put into trying to get these populations vaccinated and boosted, and just given the risk that they face,” said David Grabowski, a professor of health care policy at Harvard Medical School.

Grabowski said the Biden administration’s vaccine mandate for nursing home staff was a major factor in getting high vaccination rates initially. But he lamented that the mandate has not been updated to include the bivalent booster shot.

Industry groups are calling on the White House to help with an “all-hands-on-deck” strategy, but they are not asking for an updated mandate.

They want the administration to update its messaging about what the bivalent booster can do, and what it can’t. Specifically, they want to emphasize that the booster helps prevent serious illness, hospitalization and death, not that it prevents infection or the spread of COVID-19.

“I think there’s some confusion and misunderstanding about the value of the vaccine. Early on we talked about it preventing infections, and so [residents] are seeing breakthroughs [infections] and have questions about whether its really working,” said David Gifford, chief medical officer at the American Health Care Association.

“There’s a whole lot of vaccine fatigue out there. I think it’s very important for us to be very clear in our communications about what the bivalent booster does,” said Smith Sloan of LeadingAge. “I actually think that message is very powerful; who wants to be seriously ill?”

But Grabowski said he was skeptical that education alone would do much to increase booster uptake.

“I’m sorry, that’s just not enough at this stage. That’s just not going to move the needle much in my opinion. There’s not a lot of effort to actually go in and either mandate this or set up clinics at the facilities themselves,” Grabowski said.

Industry groups want to make it easier to administer the vaccines on-site. For the primary series, the federal government sponsored three on-site vaccination clinics at all long-term care facilities that participated in a pharmacy partnership program.

But nursing homes now need to request special clinics, rather than rely on their own long-term care pharmacies like they do for influenza shots.