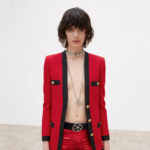 Revenue in the directly operated store network continued to grow at a “rapid pace”, up 19% on a comparable basis, with all regions seeing growth.

The group said momentum remained very strong in Western Europe, supported by both local customers and tourists, particularly from the US. Conversely, this factor weighed activity in North America itself.

Revenue in Western Europe more than doubled relative to the third quarter of 2021 due to the resumption of tourism and the group’s desirability with local customers. The group confirmed that “all other geographical zones saw strong growth”.

Sales at Balenciaga and Alexander McQueen were “particularly buoyant” across all product categories. Brioni continued its rebound.

Third-quarter revenue from Kering Eyewear and corporate amounted to €253 million. Kering Eyewear achieved total sales of €246 million, up 23% on a comparable basis. Growth was sustained across all regions and distribution channels, with “significant contributions from Gucci and Cartier” and sharp growth in all brands.

François-Henri Pinault, Kering Chairman and Chief Executive Officer, commented: “Kering’s solid performances in the third quarter underscore the strength of the Group and the pertinence of our strategy. We delivered sharp top-line growth, both versus last year and from pre-pandemic levels. Our ongoing focus on the exclusivity of our brands and on the quality of their distribution are yielding very positive results and reinforce their positioning in their key markets.

“In an increasingly complex environment, we maintain the required flexibility to support our profitability and sustain our investments in the long-term outlook of all our Houses, Gucci first and foremost. We are as confident as ever in the potential and prospects of the Group.”