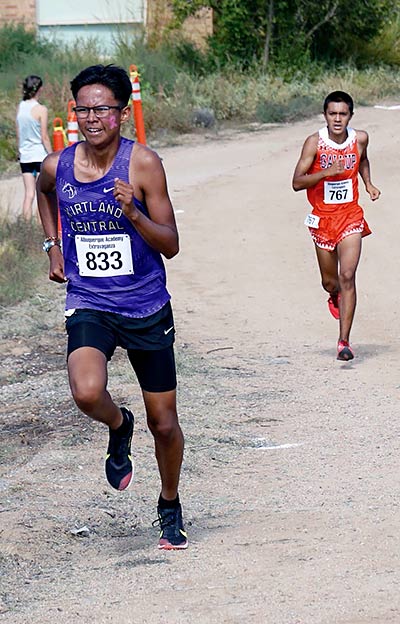 “One of my goals was to be under sub-17s, so I’m very proud of myself,” he said. “I’m feeling good and this actually sets me up for the state meet.”

Before the pre-state meet on Saturday, Esson ran a 17:13.5 at the Gallup Invitational earlier this month and last year he ran a 17:10.6 during the district meet.

“I wasn’t sure if I was going to go under 17, but our coach told us that we’re gonna get better as the season goes,” he said. “We’re going to start peaking at all these big races.”

KC coach Lenny Esson said his son has been consistently finishing in the top 10 at every race he’s ran, sometimes in the top 5.

“He’s set some goals for himself and he’s really focused on them, but the main thing we focus on is the team,” the Bronco coach said. “It’s always been first and foremost that we put the team first because that allows them to perform exceptionally well as individuals.”

That outlook helped the Broncos to a third place finish in the team standings with 136 points. They finished behind Academy (40) and Lovington (80).

On the girls side, the Lady Broncos also took home some hardware as they took third in the team standings with 123 points as they trailed Academy (24) and district rival Shiprock (84).

“If everything went right, that was kind of our goal,” Esson said of making a podium appearance. “This meet gave us a good opportunity to see where we’re at.”

Nonetheless, the KC coach said some teams did not partake in the Academy meet, notably perennial powerhouse Los Alamos.

“When you add them to the mix we’re looking from the outside in at placing in the top three for state,” he said.

Freshman Haylee Nocki was KC’s top finisher in the girls race as she placed ninth.

“My season has been up and down, but I think I did pretty good,” Nocki said.

“We stayed together and we pushed it until the end,” she said.

In the boys race, KC freshmen Raymond placed 14th overall as he earned some hardware as well.

Hunt said he was hoping to be in the top 10, but he started to feel cramps at the two mile-mark.

“I’ve been running strong all year,” he said. “My average time has always been in the top 10, but I was hurting.

“I just need to get stronger on the last mile,” he said. “I need to work on my strides because I’m not a sprinter.”