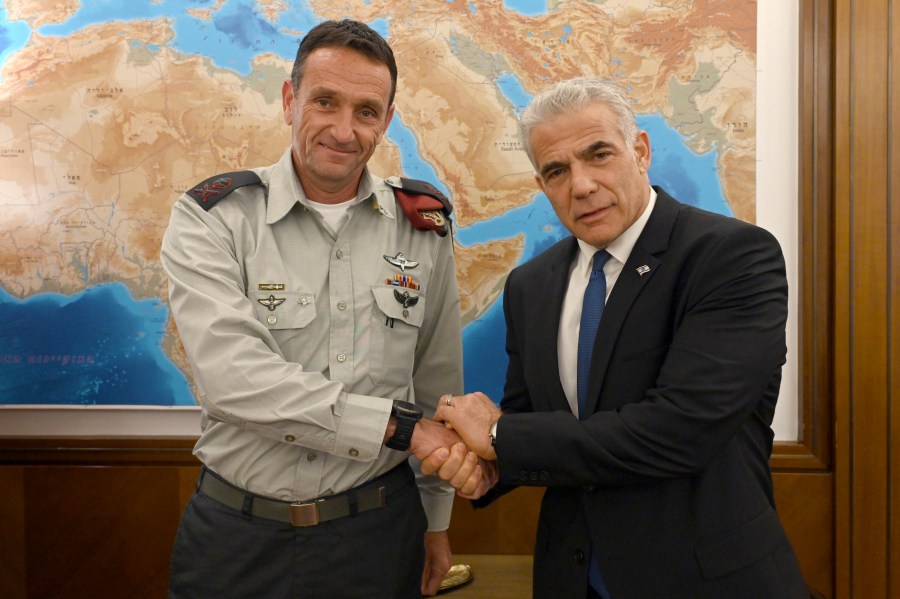 JERUSALEM (AP) — Israel’s military has long had a cozy relationship with Jewish settlers in the West Bank. Those ties are about to deepen.

For the first time, a settler will serve as chief of staff of Israel’s military, becoming the enforcer of Israel’s open-ended occupation of the West Bank, now in its 56th year.

Maj. Gen. Herzi Halevi’s nomination was approved on Sunday and he is expected to begin his three-year term on Jan. 17.

Halevi’s rise caps the decades-long transformation of the settler movement from a small group of religious ideologues to a diverse and influential force at the heart of the Israeli mainstream whose members have reached the highest ranks of government and other key institutions.

Critics say the settlers’ outsized political influence imperils any hope for the creation of an independent Palestinian state and endangers the country’s future as a democracy. They say Halevi’s appointment lays bare just how interconnected settlers and the military truly are.

“It isn’t surprising that we’ve come to a point where the chief of staff is a settler too,” said Shabtay Bendet of the anti-settlement watchdog group Peace Now.

Others say Halevi, currently deputy chief of staff, has had a distinguished military career and his place of residence won’t affect his decision-making. He served as head of the elite Sayeret Matkal unit, as well as military intelligence and led the Southern Command, from where he oversaw operations in the Gaza Strip.

Defense Minister Benny Gantz praised Halevi as an ethical officer. “I have no doubt that he is the right man to head the military,” Gantz said upon nominating him.

The military declined to make Halevi available for an interview.

Born just months after the 1967 Mideast war, when Israel captured the West Bank, and raised in Jerusalem, Halevi is a descendant of a rabbi seen as the father of the modern settler movement.

Halevi lives in Kfar HaOranim, a settlement that abuts the invisible line between Israel and the West Bank.

Many of those moving to Kfar HaOranim might have been drawn by cheaper housing prices in a central location between Jerusalem and Tel Aviv, rather than a radical ideology. Yet choosing to live in a settlement often indicates even some nationalist political inclination. Many Israelis are still hesitant to visit parts of the West Bank.

A search through some of Halevi’s past speeches and public statements did not reveal his opinion on the Jewish settlement enterprise.

Palestinians want the West Bank as part of their hoped-for state, along with east Jerusalem and the Gaza Strip.

Much of the international community considers the settlements illegitimate and obstacles to peace, while Israel views the territory as its biblical heartland and critical to security.

A two-tier system is in place in the West Bank, with settlers enjoying the same rights as citizens in Israel, while Palestinians are subject to military rule. The Palestinian Authority administers parts of the West Bank but it is hobbled in many aspects by the occupation.

For Palestinians, soldiers are the most visible enforcers of the occupation. Under international law an occupying military is meant to protect civilians under its rule, but Palestinians typically view soldiers as hostile to them.

Soldiers man the checkpoints that Palestinians must cross through to enter Israel or the ones that are set up between their cities, disrupting their journey. Soldiers often conduct arrest raids in Palestinian autonomous areas, in search of suspected militants. Palestinians accused of violence are tried, and almost always convicted, in military courts. Israel sees those measures as essential to its security.

Critics also say the military turns a blind eye to settler violence against Palestinians, which has been intensifying in recent months, including rampages that have also targeted soldiers. In one case last week a settlement guard on a Defense Ministry salary was seen joining forces with a settler in a clash with Palestinians.

For settlers, the military buttresses their presence in the West Bank. Soldiers protect settlements. The military escorts settlers when they want to visit sensitive sites or hold a march or protest. A defense body headed by a general is in charge of approving settler housing, and some of the military’s top commanders are settlers.

Oded Revivi, mayor of the Efrat settlement, said he didn’t believe Halevi’s place of residence would influence the way he ran the military in the West Bank, which he said is dictated by policies made by elected officials.

Over the years, settlers reached key positions in Israeli institutions.

The country’s current roster of Supreme Court judges includes at least two settlers. Settler politicians have long served as Cabinet ministers, including Avigdor Lieberman, who has been Israel’s foreign, defense and finance minister. Settlers have held key positions in cultural institutions and in bodies that allocate land. Former Prime Minister Naftali Bennett was previously a settler leader, though he did not live in a settlement.

That integration, part of a years-long concerted effort by settlers, is hardly questioned by Israelis.

Many Israelis give little thought to the occupation, and news media often ignore the approval of new settler housing, unless it draws international rebuke. And pushback against the settler narrative is often officially silenced. Schools in liberal Tel Aviv were recently prohibited from showing maps that demarcate the West Bank, indicating it as distinct from Israel.

The world of culture, once a mainstay of liberalism and Israel’s dovish left, has embraced settlers, featuring them on reality TV shows, while artists and musicians are increasingly agreeing to perform in settlements or accept funding from settler sponsors. One popular rocker who had often denounced settlers apologized to them at a recent concert in the Beit El settlement.

Diana Buttu, a Palestinian commentator, said having a settler as chief of staff raises concerns that the military’s conduct toward the Palestinians will worsen, further entrench Israel’s occupation and make the creation of a Palestinian state all the more unlikely.

“There’s this fiction that people in the international community seem to have that somehow there’s Israel and then there’s the settlements — as though they are separate and apart from one another,” she said. “But really, in reality, we see that it’s all one.”