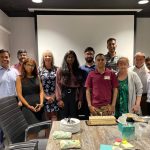 The blue-collar staffing space is dominated by multinational, legacy, publicly-traded players like Manpower, Randstad, and Adecco, which have seen a lot of success matching employers with job-seekers.

But according to Jombone co-founder and CEO Sumit Sahdev, the sector has been working “in an antiquated fashion” for decades, relying on inefficient, expensive, and highly manual processes to find, hire, manage, and pay workers. “There has been no innovation in this industry for a very, very long time,” Sumit Sahdev told BetaKit in an interview.

After establishing a presence across Canada and seeing strong growth during COVID-19, Jombone has secured $3 million CAD in seed funding, led by Toronto-based StandUp Ventures and Export Development Canada (EDC), to square off with legacy staffing giants and fuel its United States (US) expansion plans.

The round, which closed in June and marks Jombone’s first institutional financing, consists of $3 million in equity capital and $300,000 in grant funding from NRC IRAP. In addition to StandUp and EDC, Jombone’s seed financing was supported by The51, N49P Ventures, and undisclosed angel investors. The raise brings Jombone’s total funding to $3.7 million.

Jombone was founded in 2019 by Sumit Sahdev, previously the lead of Deloitte’s digital consumer practice, and Garima Sahdev, a former human resources (HR) and recruitment leader. The startup describes itself as “LinkedIn for blue collar powered by an enterprise-class human capital platform.”

Using automation, artificial intelligence, and analytics, Jombone aims to help industrial businesses save money and hire and manage workers more efficiently than traditional staffing firms, which the startup views as its competition.

According to Sumit Sahdev, in its current form, the industrial staffing industry is particularly siloed, as many of the processes associated with finding, hiring, and managing workers are typically handled by different organizational arms and systems.

Jombone certainly isn’t the only tech startup trying to tackle the issue of staffing: the space also features emerging players like Plum, CornerJob, Pintarnya, Landed, and Wonolo. Asked about the competitive landscape, Sahdev noted that many of the other players in this space are either more sector-specific, focus only on a particular part of the worker acquisition and management process, or are trying to build marketplaces of gig workers, an approach he doesn’t believe is viable given the size and regulated nature of the industrial sector.

As the CEO puts it, convenience alone is not enough. Part of what sets Jombone apart from the rest of the field, he says, is its function as an end-to-end solution for handling all aspects of the worker acquisition and management process, from hiring to payments. By doing this, the startup also aims to provide its customers with more insight into their workforce operations in the form of analytics.

The51 co-CEO and fund managing partner Judy Fairburn told BetaKit that part of what attracted the fund was the Jombone founders’ “deep experience in recruiting, tech and international business.”

Fairburn noted that The51 also identified a broader opportunity. “We saw a significant market opportunity, given that 65% of Canada’s labor market are in blue-collar sector jobs with an acute shortage of workers particularly post-pandemic,” she said, adding that this market opportunity, coupled with the strength of Jombone’s tech platform, customer fit, revenue, and profitability, drew The51 to invest in the startup.

Prior to the pandemic, Sumit Sahdev said that prospective clients were less willing to adopt digital staffing solutions. But COVID-19 served as an accelerant for Jombone.

“When COVID broke, we literally grew by 300 percent for several months,” the CEO said, attributing the startup’s growth to a few factors, including the pandemic-driven shift to digital, rise of e-commerce, and supply chain strains that have typified the economic environment since early 2020. Given the amount of worker turnover that took place in some of these sectors during COVID-19, businesses were forced to hire quickly to keep pace with demand.

StandUp managing partner Michelle McBane noted that amid today’s environment—which features rising inflation and the risks associated with a recession—industrial businesses are seeking cost-effective and compliant workforce management solutions like Jombone. “These factors and the strength of their offering is positioning Jombone for exceptional growth,” said McBane.

Sumit Sahdev acknowledged that it is a “difficult and interesting time” from a global macroeconomic perspective, but expects that the demand for blue-collar workers will remain strong and “vibrant” regardless of broader market conditions.

According to the CEO, Jombone is already generating positive operating cashflows, which he said tells the startup “that businesses need a solution like this.”

Jombone currently serves four Canadian provinces—British Columbia, Alberta, Ontario, and Québec. The startup plans to use this seed capital to fuel its US expansion plans and deepen its presence in existing markets. In the US, Jombone is targeting the east coast, California, and Texas. Sumit Sahdev noted that the firm already has some American customers using the company’s platform in Canada, and sees a chance to cater to these clients south of the border as well.

To support these plans, Jombone plans to grow its 20-person team to 60 employees over the next year and a half, and invest heavily in sales and marketing.

UK’s Truss sticks by economic plan as her party worries