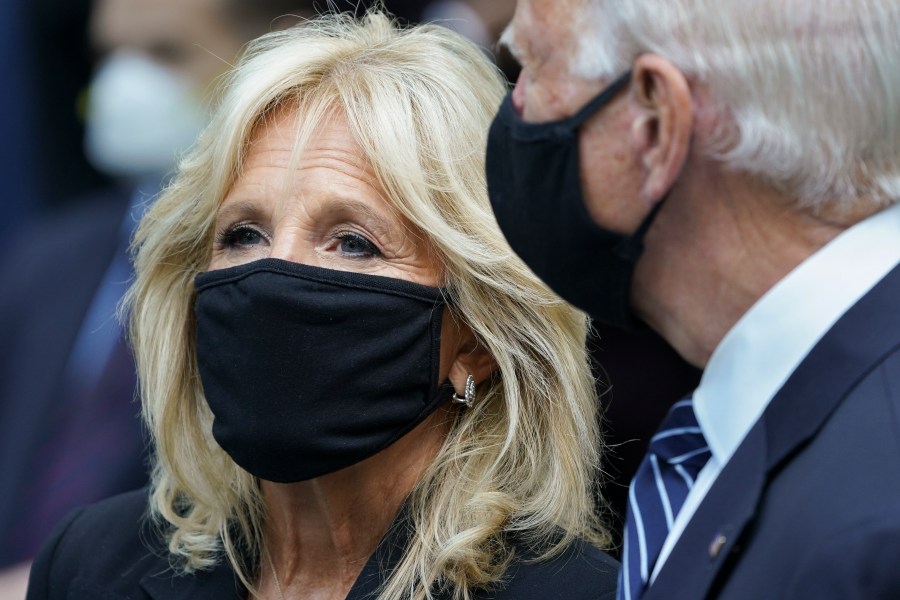 WASHINGTON (AP) — When Jill Biden realized that terrorists had attacked America on Sept. 11, 2001, her husband, Joe, wasn’t the only loved one whose safety she worried about.

Biden recalled being “scared to death” that her sister Bonny Jacobs, a United Airlines flight attendant, was on one of the four hijacked airplanes that were flown into New York’s World Trade Center, the Pentagon and a Pennsylvania field, killing nearly 3,000 people.

After learning that her sister was safe at her Pennsylvania home, “I went straight to Bonny’s house,” Biden told The Associated Press on Saturday as she and her sister remembered that day.

On Sunday, Jill Biden, now the first lady, will mark the 21st anniversary of the 9/11 attacks by delivering remarks at the Flight 93 National Memorial in Shanksville, Pennsylvania — accompanied by Jacobs.

The 40 passengers and crew aboard that United Airlines flight fought back against their hijackers, thwarting a feared attack on the U.S. Capitol in Washington.

“I called Bonny to see where she was because I was scared to death … I didn’t know where she was, whether she was flying, not flying, where she was,” Jill Biden recalled. “And then I found out she was home.”

Biden had gone to teach her class at Delaware Technical Community College, then went straight to her sister’s house after school was dismissed.

Joe Biden, then a U.S. senator, was on an Amtrak train barreling toward Washington when his wife got through to him. They were on the phone when she cried out, “Oh my God, oh my God, oh my God” after an airplane hit the second World Trade Center tower.

Jacobs said she had gotten home around 2 a.m. on Sept. 11 after a late flight. She slept a little, got up to help get her kids, then 11 and 7, off to school, turned off her phone and went back to bed.

“So when I got up around noon, it was such a gorgeous day,” she said. “I had my coffee. I sat outside. I literally said out loud, ‘I’m doing nothing today, this day is gorgeous.’”

She saw the phone beeping when she went inside. Jill had left a message asking if she’d been watching television. She turned it on and saw replays of the attack on the World Trade Center.

“I started to shake,” Jacobs said, adding that she went upstairs to get dressed and “put my clothes on inside out” and spent the rest of the day watching TV.

“And then the first person that came to the house was Jill,” she said. “I hadn’t called her to come, but she just showed up, and she was there for me, as usual.”

Jacobs said she usually flies on the Sept. 11 anniversary to pay tribute to her fallen United Airlines colleagues and as a way of distracting herself “because it’s so upsetting.” But she wanted to be with the first lady in Shanksville to offer the same kind of support her big sister has given her.

“It’s such a special moment to be together with her,” Jacobs said. “She was there for me at the time that it happened and she actually is always there for me. She is my rock. Everybody should have a rock in their life, and she is mine.”

“And it’s such as special thing to share it with her as a flight attendant and that she’s there, you know, supporting us,” Jacobs said.

In addition to laying a wreath at the memorial and delivering remarks, the first lady was joining members of the Association of Flight Attendants-CWA to honor the Flight 93 crew members.

In her prepared remarks for Sunday, Jill Biden says that after the shock of 9/11 “settled into sorrow” and she had spoken with her husband and children, her thoughts turned to her sister, who continues to work as a flight attendant with United Airlines.

“It’s a job that she has loved for many years and I knew that the weight of this tragedy would be heavier for her,” the first lady says. “When I got to her house, I realized that I was right. She hadn’t just lost colleagues. She had lost friends.”

She adds: “But I know that, as we learned more about that dark day, she felt pride for what happened here as well, pride that it was fellow flight attendants and the passengers of United Flight 93 who fought back, who helped stop the plane from taking an untold number of lives in our nation’s capital.”

Joe Biden, now president, was to commemorate the day at the Pentagon. Vice President Kamala Harris and her husband, Doug Emhoff, were to be at the New York remembrance.

On 9/11, then-Sen. Biden arrived in Washington to see smoke in the sky from the crash at the Pentagon. He wanted to go to the floor of the Senate, but the Capitol and the surrounding complex of offices and official buildings, including the Supreme Court, had been evacuated.

He was turned away by Capitol police, who said there was a risk that the building was a target.

Jill Biden said scores of lives were saved — including possibly her husband’s — by the actions of everyone aboard United Airlines Flight 93.

“That plane was headed for the U.S. Capitol and so I think it’s important that every year we go to Shanksville and we remember those who fought: the flight attendants, the captains, the pilots, all of those who fought to save those lives,” the first lady said in the interview.

“There were so many things swirling that day because I was worried about Joe’s safety, but I just could not imagine that my sister was on one of those flights,” the first lady said.

“I don’t know what word I want to use. I was so worried and I don’t even think that’s strong enough,” she added.

Jacobs interjected to say 9/11 was “surreal.”

Jill Biden added: “The whole thing was so surreal, but I was just, you know, just really praying that she was not on one of those flights.”