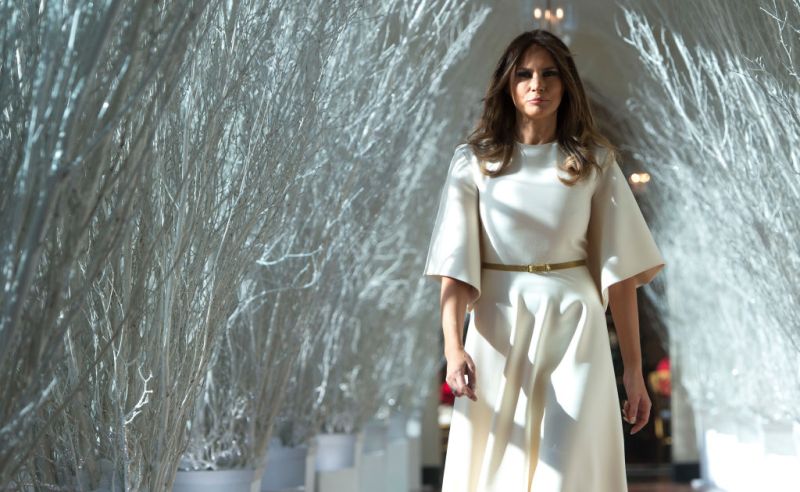 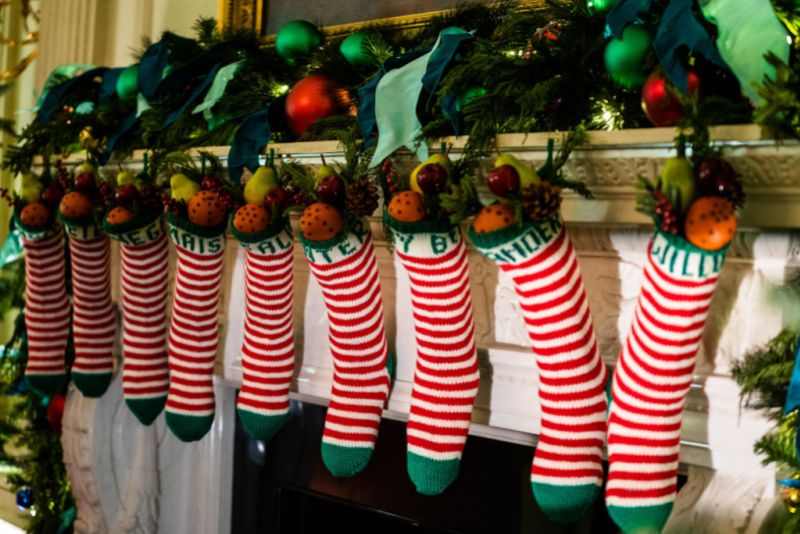 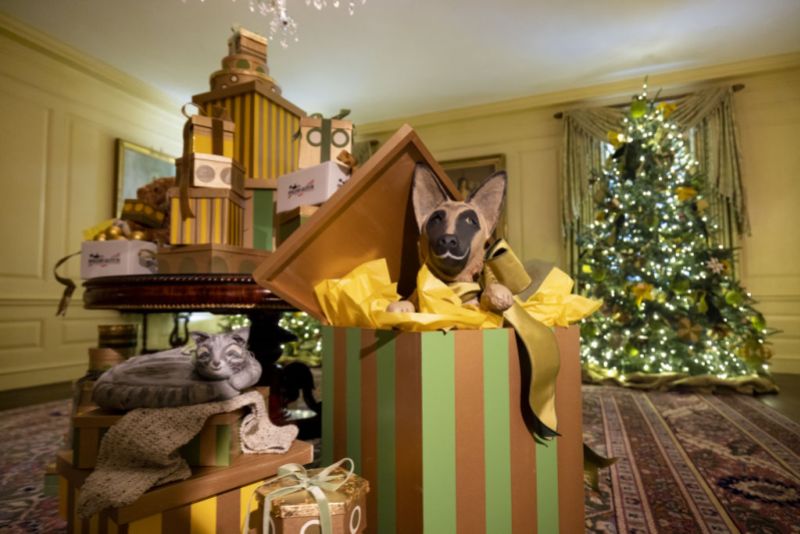 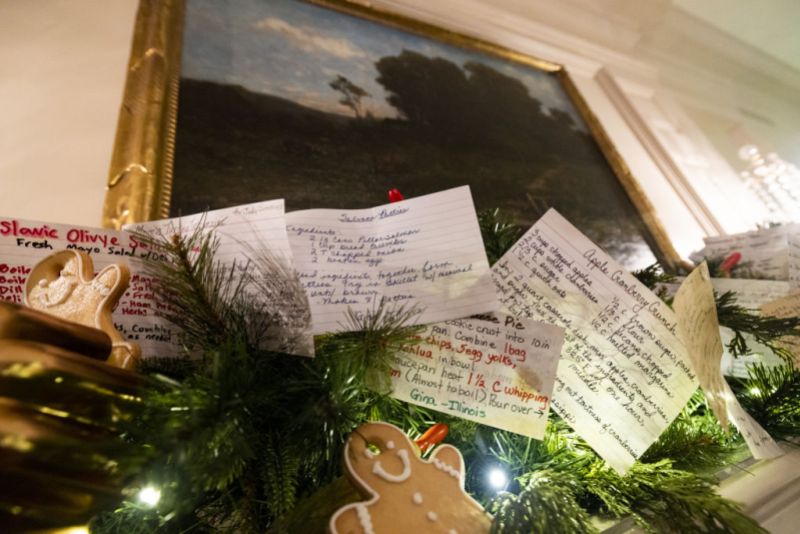 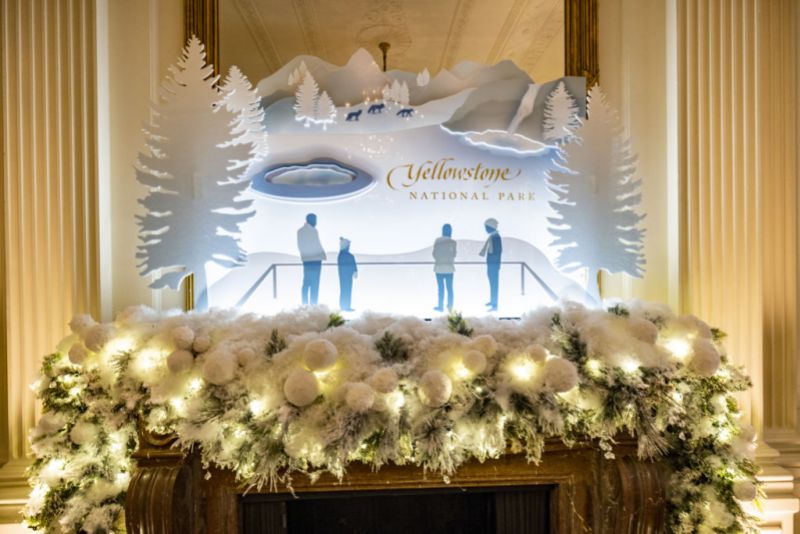 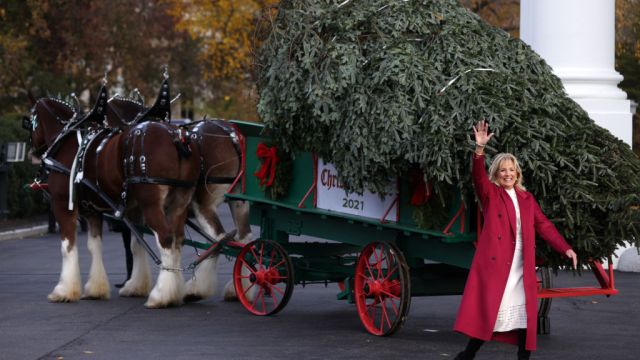 With an inclusive theme of ‘We the People’, Jill Biden’s White House Christmas decorations have taken on a warm glow to reflect the heart and soul of America this year, unlike those of her predecessor, Melania Trump.

As she officially unveiled the elaborate Christmas theme this year alongside National Guard families, Dr Biden said travelling across the US – visiting more than 40 states – helped inform her decor decisions.

Invoking the memory of the Bidens’ late son, Beau, (a former member of the National Guard), each room of the White House is adorned with trinkets and elaborate gold star ornaments to remember fallen soldiers.

Up to 50,000 excited families and children will walk the corridors of power and revel in Dr Biden’s story which has brought the spirit of Christmas to the White House.

The same could not be said for the previous first lady Melania Trump, who was recorded bashing Christmas decorations and filmed walking through a forest of blood trees in 2018.

Mrs Trump was labelled the grinch on social media, criticised for not being at one with nature, and for using Christmas to express her dislike of her husband’s Mexico border policies.

Memes flooded the internet, with references to the long-suffering women in The Handmaid’s Tale, trees that looked like car-wash brushes and even symbols of blood waves from Stephen King’s The Shining.

Echoing the sentiments of many on social media after Dr Biden’s November 29 curtain raiser, one Twitter fan wrote: “Beats the hell out of the red Christmas tree horror story Melania was promoting.”

And this: “How utterly graceful and beautiful. Such a welcome change from the blood red Christmas trees hallways and ghoulish horror show of the era of Melania and the WH.”

In the summer of 2018, Mrs Trump was secretly recorded expressing her frustration at being criticised for her husband’s policy of separating families who illegally crossed the southern border.

At the same time, she spoke about needing to perform traditional first lady duties, such as preparing for Christmas, CNN reported exclusively on October 1 that year.

“They say I’m complicit. I’m the same like him, I support him. I don’t say enough I don’t do enough where I am,” she said in a tape secretly recorded by Stephanie Winston Wolkoff, a former friend and senior adviser.

In September this year, Mrs Trump sought to set the record straight about that infamous chat, posting on Instagram that in fact Christmas “is an important time for me, my family, and the American people”.

“While I was serving as first lady of our country, Stephanie Wolkoff secretly recorded several of our conversations. Wolkoff then spitefully edited and released our conversation to create the perception that Christmas is not significant to me.

“I will personally set the record straight because the mainstream media has failed to provide context for these misleading exchanges.

“My devotion to the holiday is personal and profoundly serious,” she wrote.

There was a bowl of artichokes, a weird not-Christmassy wreath made of ‘Be Best’ pencils and ‘Be Best’ ornaments on the trees.

There were random train sets on tables, and Balsam fir trees “that dripped with icicles, sparking memes about the first lady’s potential penchant for existential dread”.

The US’s national public radio network, npr.org, said the first lady’s choice of the East Colonnade 40 blood-red trees in 2018 was a “symbol of valour and bravery”.

Despite explanations, she was mocked, and Mr Trump still harbours resentment at his wife’s decorating blunders.

In a speech at the First Baptist Church in Dallas in December last year, he told the congregation his former first lady was “loved by everybody” but lamented that she “didn’t get exactly a fair shake”.

“She would make the most beautiful Christmas decorations … and I remember she made these magnificent red trees, and the media said, ‘Oh, that’s terrible.’ I said, ‘Honey, next time, try white.’

“She made magnificent – remember, the most beautiful you’ve ever seen – white trees. And they said, ‘Oh, that’s terrible.’ I said, the next time, ‘Let’s do it more traditional. Let’s go with green,’” he said.

The post Jill Biden restores the spirit of Christmas after Melania’s blood trees and witch fingers appeared first on The New Daily.