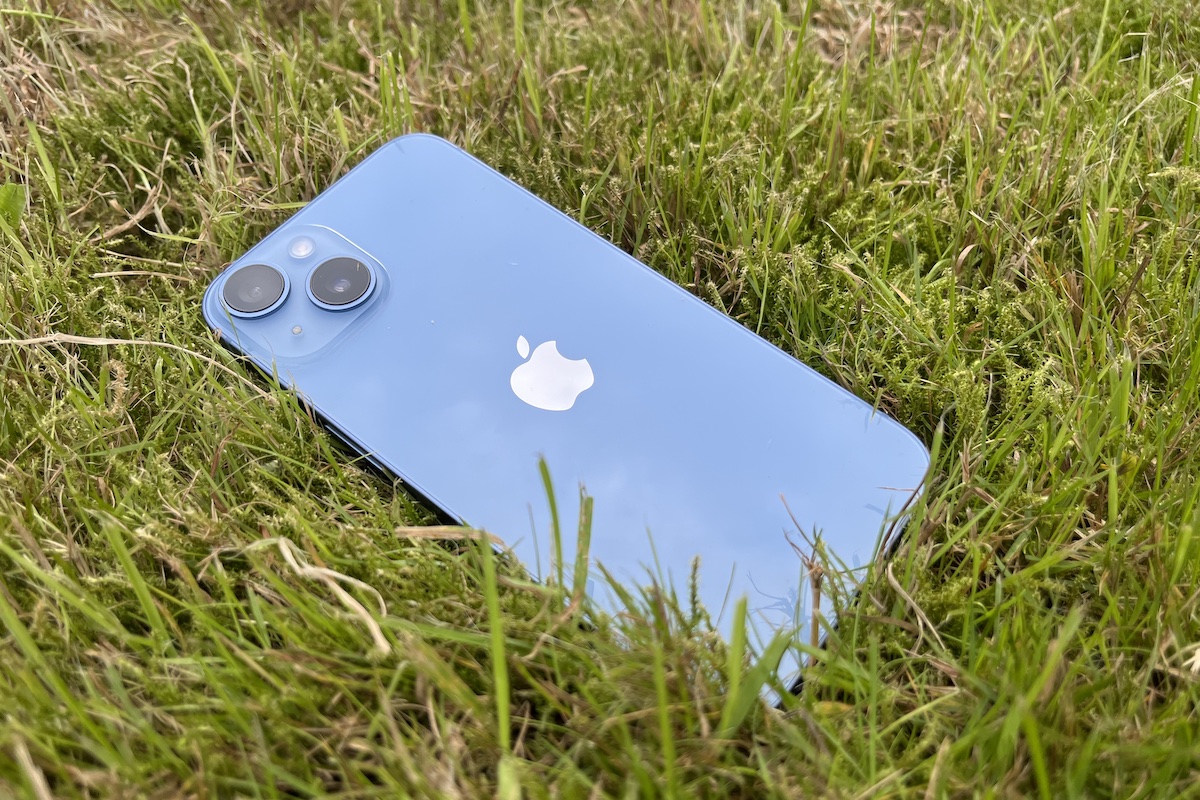 The iPhone 14 has enough new features to make it an excellent choice if you are looking to upgrade from an older iPhone. While it’s not a huge leap up from the previous model, the new camera features will be enough to make iPhone 13 users jealous.

The iPhone 14 is basically an iPhone 13s. It features a very similar processor and has a very similar appearance as the previous generation, but like the S iPhones of old offers a bunch of new camera features that improve photography in impressive ways.

Starting at $799, the iPhone 14 costs the same as the iPhone 13 in the U.S.—though if you live elsewhere you will be paying more. In the U.K. for example the iPhone 14 costs £849 while the iPhone 13 was £779. This bump in price means the standard iPhone is less affordable than it was for many, and when you consider you could save $100/£100 by buying a new iPhone 13, the question is: Do the new features justify the price?

What’s new (and what’s the same)

With the arrival of the iPhone 14, Apple has increased the gap between the standard and Pro iPhones. This year nearly all the headline features are absent from the iPhone 14. This doesn’t mean that the iPhone 14 isn’t a good choice, it just means that you’re sacrificing more by going with the lower model.

So what new features does the iPhone 14 get? Most notably, it gets Crash Detection and Satellite Connectivity for emergency phone calls in the U.S. and Canada. Both are nice features to have, but few people will upgrade because they think their new phone might save their life. Still we’ll no doubt see these features in the September 2023 iPhone keynote in Apple’s “look at these lives we saved” segment.

There are some new color options to set the iPhone 14 apart from the iPhone 13. The iPhone 14 offers pale blue, light purple, Midnight (black), Starlight (silver), and Product Red, while the iPhone 13 comes in green, pink and dark blue, as well as Midnight, Starlight and Product Red. You’ll probably put a case on it anyway but be careful which one you buy—Apple has slightly shifted the location and size of the power and volume buttons so old cases probably won’t fit.

The best way to tell the iPhone 13 and iPhone 14 apart is by laying them on their back. You’ll clearly see that the cameras on the back of the newer iPhone cause the phone to be raised more—and for a good reason. The iPhone 14 still features two cameras array with 12MP wide and ultra-wide lenses, but for this generation Apple includes a faster aperture (ƒ/1.5 rather than ƒ/1.6) and a larger sensor and larger 1.9μm pixels on the main camera. There’s also a new Photonic Engine computational system which allows Apple’s Deep Fusion image processing (a feature on all iPhones since the iPhone 11) to be performed on uncompressed images with more data available.

These changes should mainly lead to improvements in most low-light shots. Indeed, Apple claims 49 percent better performance in such conditions. I put this claim to the test and was surprised to find quite a big difference in some shots. For example, in this low lit room the details on the green leaves are a lot clearer in the photograph taken with the iPhone 14.

The Photonic Engine also drives the new foreground blur feature in Portrait Mode. This means that it’s not just the background that will blur when you are taking a Portrait Mode shot (whether from the front or rear cameras). It will also blur what’s directly in front of you, which has the effect of focusing even more attention on the face. We attempted to create this effect, but didn’t feel that our efforts were as good as those in the images taken by Apple’s professional photographer.

Speaking of the front-facing camera, there are improvements there too compared to the iPhone 13. The TrueDepth camera now gains autofocus and improved low-light performance thanks to a wider aperture (now ƒ/1.9 rather than ƒ/2.2 aperture). While you can see some small differences between these two selfies taken below, the big advantage is actually in how long it took for the photos to be taken. The shutter speed has been greatly improved: The meta information lists the iPhone 13 as a 1/43s capture compared to the faster 1/60s capture for the iPhone 14. So the real difference here is how long you need to keep your arm still for and still get the same result.

The best reason to upgrade to the iPhone, however, isn’t photos—it’s videos. If you open the camera and switch to video you will see a new icon for Action Mode in the top left that looks like a running person. Switch this on and you can film while you walk or even run and still get a smooth video. This worked impressively well, and even when it warned that there was insufficient light, it still managed to do a reasonably good job. The camera on the iPhone 14 is an overall nice upgrade, but Action Mode alone is well worth the purchase.

Other camera improvements include brighter True Tone flash and the Ultra Wide camera can capture a slightly wider image, plus the exposure time for Night Mode photography is faster.

Aside from the fact that the iPhone 14 looks like the iPhone 13, there’s another reason why some will say that there isn’t a big difference between the new and old handset: both phones have an A15 processor. However, the A15 found in the iPhone 14 isn’t exactly the same as that in the iPhone 13.

The iPhone 14 uses the A15 Bionic that Apple used in the iPhone 13 Pro. It has one more GPU core than the standard A15 chip. Apple claims that users can expect 18 percent faster GPU performance compared to the iPhone 13. This extra GPU core will be beneficial if you play games or use other graphics intensive apps. There’s not just an extra GPU core on offer here though. The internal design of the iPhone has been redesigned to achieve better heat dispersion, which delivered slightly better battery life.

In these benchmarks you can see that the iPhone 14 delivers decent speed boosts compared to the iPhone 13 and move it into iPhone 13 Pro territory and even beats it in some tests.

One of the big changes for the U.S. market is Apple’s abandonment of the SIM card in favor of eSIM, which won’t matter to most users. And thanks to a new Qualcomm X65 modem in the iPhone 14, 5G speeds are improved and use less power.

In our tests, those scores matched up. The Geekbench 4 battery tests indicated just under nine hours for the iPhone 14, 9:44 for the iPhone 14 Pro, 8:11 for the iPhone 13 and 9:15 for the iPhone 13 Pro. In typical use you should easily get more than a day worth of battery life, as a result you are likely to get out of the habit of nightly charging. Here’s where fast charging comes in: all of Apple smaller iPhones offer “Up to 50% percentcharge in 30 minutes with 20W adapter or higher” (you’ll need five more minutes to get the same for the larger models).

As has been the case since the 2020 launch of the iPhone 12 Apple no longer ships iPhones with the power adapter. You’ll find a lightning cable in the box but if you don’t already own a plug you’ll need to purchase one. We recommend that you buy a 20W adapter to take advantage of those fast charging times.

Should you buy an iPhone 14?

Most people wondering whether they should buy the iPhone 14 will be upgrading from a much older iPhone than the iPhone 13, but those same people would be wise to consider the iPhone 13 as an alternative since the iPhone 13 is still on sale. Aside from Action Mode and the other camera improvements there isn’t a big difference between the iPhone 13 and iPhone 14, so if those features don’t appeal you’ll be just as happy with the cheaper iPhone 13.

If the new camera features of the iPhone 14 are attractive to you then you may want to consider spending a little more to get the iPhone 14 Pro, which brings a 48MP camera and a 3X telephoto lens along with all of the new iPhone 14 camera features. Plus you’ll get an A16 processor, always-on display and the Dynamic Island. Those features might be worth an extra $200/£250 to you.

If you are upgrading from a large iPhone, like the iPhone XS Max or the iPhone 12 Pro, for example, then we’d suggest that you wait until the iPhone 14 Plus arrives in October before buying the iPhone 14 as it will feel smaller in your hands in comparison to what you are used to.

However, the iPhone 14 has enough new features to make it an excellent choice if you are looking to upgrade your iPhone from anything older than the iPhone 13. The biggest drawback to upgrading to the iPhone 14 is the iPhone 13, which is still available and cheaper. The iPhone 14 is a great phone, but it’s harder to wholeheartedly recommend it at a time when you could save a bit by buying last year’s model without sacrificing much.