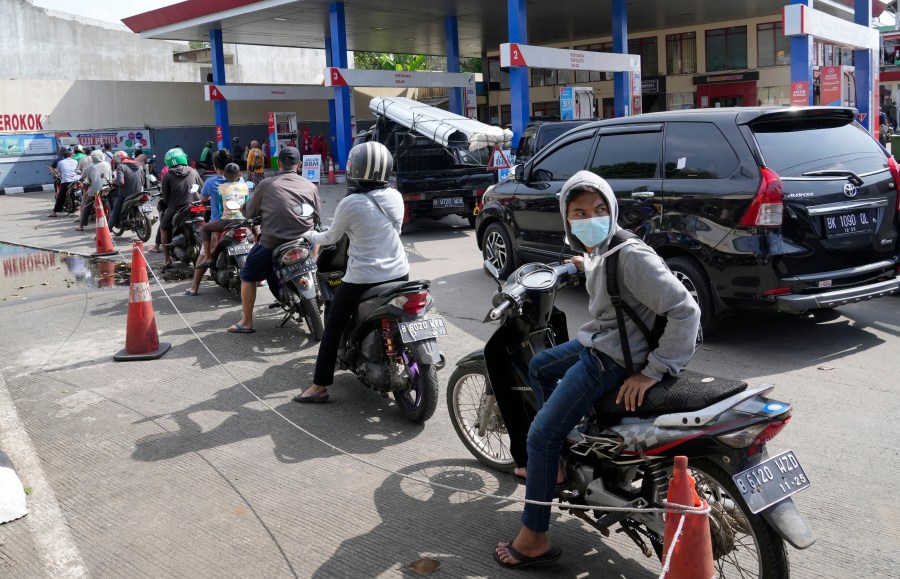 JAKARTA, Indonesia (AP) — Fuel prices increased by about 30% across Indonesia on Saturday after the government reduced some of the costly subsidies that have kept inflation in Southeast Asia’s largest economy among the world’s lowest.

Indonesians have been fretting for weeks about a looming increase in the price of subsidized Pertalite RON-90 gasoline sold by Pertamina, the state-owned oil and gas company. Long lines of motorbikes and cars snaked around gas stations as motorists waited for hours to fill up their tanks with cheaper gas before the increase took effect on Saturday.

The hike — the first in eight years — raised the price of gasoline from about 51 cents to 67 cents per liter and diesel fuel from 35 cents to 46 cents.

President Joko Widodo said the decision to increase the fuel prices was his last option as the country’s energy subsidy had tripled this year to 502 trillion rupiah ($34 billion) from its original budget, triggered by rising global prices of oil and gas.

He said that the flow of subsidies to the public was not well targeted — about 70% of subsidies were benefiting middle and upper classes — and the government decided instead to increase social assistance.

Finance Minister Sri Mulyani Indrawati said authorities were monitoring the impact on inflation and economic growth of the rise in fuel price.

Inflation has been relatively modest with the shock being mostly absorbed through a budget bolstered by energy subsidies. Inflation hit 4.6% in August as Bank Indonesia, the central bank, has said it would reassess the inflation outlook in response to the government fuel price policy.

Indrawati said in a separate news conference that the government would provide 150,000 rupiah ($10) cash handouts to cushion the impact of the fuel price increase on 20.6 million poor families until the year end. The total cost of the handouts will be 12.4 trillion rupiah, which will be reallocated from the budget for energy subsidies.

She said the government will also spend 9.6 trillion rupiah ($644 million) on salary assistance to about 16 million low paid workers, and 2.17 trillion rupiah ($145 million) will go to subsidizing transport costs, particularly for motorcycle taxi drivers and fishermen.

“We hope this can reduce pressure of rising prices and help reduce poverty,” Indrawati said.

The government has subsidized fuel for decades in Indonesia, the vast archipelago nation of more than 270 million people.

Fuel prices are a politically sensitive issue that could trigger other price hikes and risk student protests. In 1998, an increase in prices sparked riots that helped topple longtime dictator Suharto.