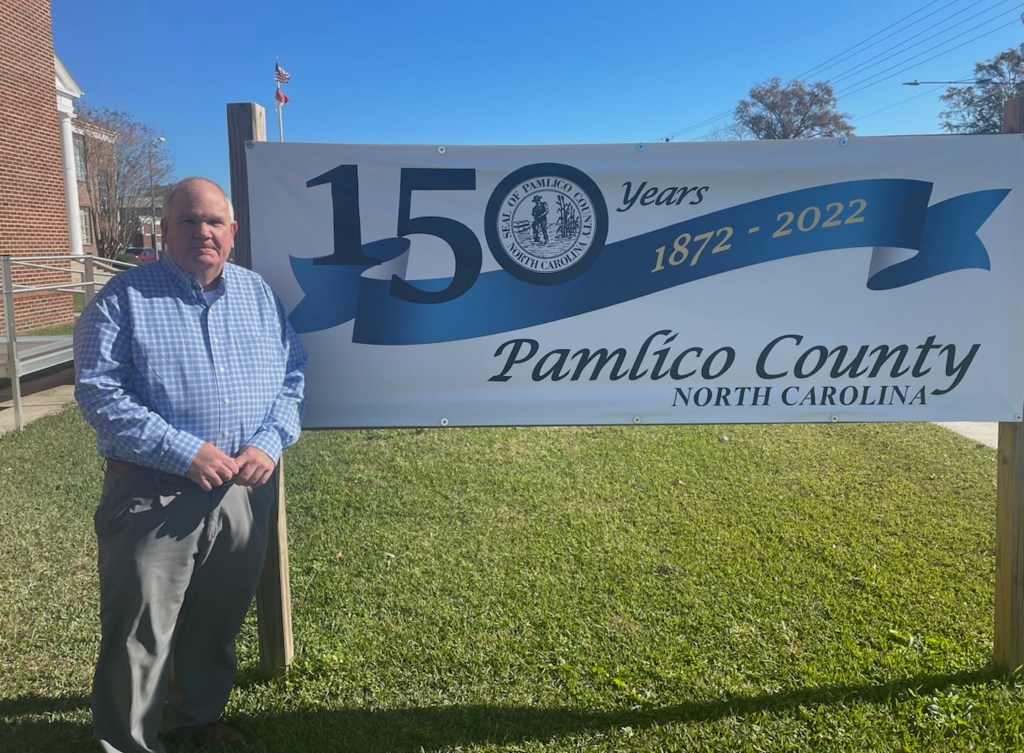 Tim Buck knows by heart how many people died from drug overdoses in his North Carolina county last year: 10. The year before it was 12 — an all-time high.

Those losses reverberate deeply in rural Pamlico County, a tightknit community of 12,000 on the state’s eastern shore. Over the past decade, it’s had the highest rate of opioid overdose deaths in North Carolina.

“Most folks know these individuals or know somebody who knows them,” said Buck, the county manager and a lifelong resident, who will proudly tell anyone that four generations of his family have called the area home. “We all feel it and we hate it when our folks hurt.”

Now, the county is receiving money from national settlements with opioid manufacturers and distributors to address the crisis. But by the time those billions of dollars are divided among states and localities, using formulas partially based on population, what trickles down to hard-hit places like Pamlico County can be a trifling sum.

Out of one multibillion-dollar national settlement, Pamlico County is set to receive about $773,000 over nearly two decades. By contrast, Wake County, home to the capital city of Raleigh, is set to receive $36 million during the same period, even though its opioid overdose death rate for the past decade ranked 87th in the state.

Buck said his county’s share “is not a lot of funds per year. But I’m glad we have something to try to reduce that overdose number.”

Rural communities across America were harbingers of the opioid crisis. In the 1990s, misleading marketing by opioid companies helped drive up prescription rates, particularly in coal, lumber, and manufacturing towns across Appalachia and Maine. As painkillers flooded communities, some residents became addicted. Over time, they started using heroin and fentanyl, and the deadly epidemic spilled into suburbs and cities across the nation.

State and local governments filed thousands of lawsuits against drug companies and wholesalers accused of fueling the crisis, resulting in a plethora of settlement deals. The largest to date is a $26 billion settlement that began paying out this year.

As the funds arrive, some people say it’s reasonable for densely populated cities and counties to receive more, as they serve a greater number of residents. But others worry such an approach misses an opportunity to use that money to make a difference in rural communities that have been disproportionately affected for decades.

Just because rural areas are less populated doesn’t mean it’s cheaper to provide health services there. Research suggests the per-person cost can be greater when counties can’t capitalize on economies of scale.

In West Virginia, Attorney General Patrick Morrisey has rejected several national opioid settlements because of their distribution methods and pursued separate lawsuits instead, saying the state needs a deal that reflects the severity of its crisis, not the size of its population.

Allocations from the $26 billion national settlement were determined by each state’s population and the portion of overdose deaths, residents with opioid use disorders, and prescription painkillers it contributed to the nation’s total. Many states used similar formulas to distribute funds among their cities and counties.

Although the goal was to reflect the severity of each area’s crisis, those statistics tend to scale up by population. Further, some experts say wealthier communities with higher rates of prescription drug use may benefit while poorer communities affected by heroin and fentanyl may lose out.

Pennsylvania took a different route, devising its own formula to distribute funds among 67 counties — taking into account opioid-related hospitalizations and first responders’ administration of naloxone, an overdose reversal medication. When that formula left 11 rural counties without “enough money to make an impact,” the state decided each county would receive a minimum of $1 million over the 18-year settlement period, said Glenn Sterner, an assistant professor at Penn State who helped develop the state formula and co-authored a paper on it.

In other parts of the country without guaranteed minimums, some local officials say their share of the settlement funds won’t cover one psychologist’s salary, let alone the creation of treatment facilities.

But medical treatment — among the most expensive interventions — is just one piece of the puzzle, said Nidhi Sachdeva, who leads health and opioid initiatives for the North Carolina Association of County Commissioners. She recommends that rural counties explore lower-cost, evidence-based options like distributing naloxone, funding syringe service programs, or connecting people to housing or employment.

Another option is to pool resources among counties. In eastern North Carolina, Martin, Tyrrell, and Washington counties plan to funnel their settlement dollars into a long-standing regional health department, said David Clegg, manager and attorney for Tyrrell County. With a combined population of 36,000, the three counties have used a similar approach in combating covid-19 and sexually transmitted infections.

When it comes to funding, “we’re always the caboose of the train,” Clegg said of his county. “We couldn’t function if we didn’t partner for lots of different services.”

In Colorado, pooling funds is built into the state’s model for managing opioid settlement money. The lion’s share of funds is going to 19 newly formed regions, about half of which comprise multiple counties.

Regions 18 and 19 together have a population of less than 300,000 spread across an area in southeastern Colorado bigger than Connecticut, New Jersey, and Vermont combined. Since 2016, residents of those regions have landed in the emergency room for opioid overdoses at rates higher than those elsewhere in the state. And in the past decade, people in Regions 18 and 19 have died of opioid overdoses at rates rivaled only by Denver. But combined they are receiving only about 9% of all funds being distributed to the regions.

“It is what it is,” said Wendy Buxton-Andrade, a Prowers County, Colorado, commissioner and chair of the opioid settlement board for Region 19. “We get what we get, we don’t throw a fit, and you just figure out ways to make it work.”

Region 18 was allocated less than $500,000 for six southern Colorado counties for the first year. Lori Laske, an Alamosa County commissioner and chair of the region’s opioid settlement committee, said its members hope to recruit private entities to fill in gaps the funding won’t cover. For example, as of mid-November, her county was in the process of selling a building behind the sheriff’s office to an organization with plans to turn it into a 30-bed recovery center.

“Nobody has paid any attention to our rural areas and this problem for years,” Laske said. The money “is never enough, but it’s more than we had, and it’s a start.”

The state has set aside 10% of its opioid settlement dollars for what it’s dubbed “infrastructure,” which can include workforce training, telehealth expansion, and transportation to treatment. Any region can apply for that money. The idea “is to provide additional funds for those areas of the state that are hardest hit,” said Lawrence Pacheco, a spokesperson for the Colorado attorney general.

Pack, the expert from East Tennessee State University, said partnering with private companies can help sustain programs after settlement funds run out. For example, a county could build a treatment facility, then find a local hospital to staff it. Or it could partner with local banks and real estate developers to find unused buildings to renovate as recovery houses.

“We need to be creative and make a good business case for those kinds of partnerships,” Pack said.

For counties that aren’t sure where to start, Samantha Karon, who oversees substance use disorder programs for the National Association of Counties, suggested analyzing data and interviewing community members to identify and prioritize gaps in services.

Surry County in northwestern North Carolina, along the Virginia border, undertook this process last year. County staffers and volunteers conducted 55 in-depth interviews, gathered more than 700 responses to an online survey, and reviewed national, state, and local data. They cross-referenced the results with a list of allowable uses for the $9 million in settlement funds they’ll receive over 18 years to create a priority grid.

“It’s a graphic representation of where we should go first,” said Mark Willis, director of the county’s Office of Substance Abuse Recovery.

To his surprise, residents’ top priority wasn’t simply more treatment facilities, but rather a continuum of services to prevent addiction, treat it, and help people in recovery lead stable and successful lives. As a result, his office is considering creating a community recovery center or funding more peer support specialists. The county also plans to continue the assessment process in coming years and shift efforts accordingly.

Meanwhile, in Pamlico County, Buck said he and other leaders are open to all ideas to decrease the overdose deaths that have racked their community.

Although building a treatment center is unrealistic, they’re looking at low-cost programs that can deliver more bang for the buck. They’re also considering investing other county funds into a project early on and reimbursing themselves with settlement payouts in later years, if the agreement allows that.

“We don’t want anybody to die a tragic death,” Buck said. “Our challenge is figuring out what role we can play in preventing that with the funds we have.”

For North Carolina counties, the rates of opioid deaths were calculated by dividing the sum of opioid deaths from 2010 to 2020 by the sum of the annual population estimates from 2010 to 2020. Counts of “illicit opioid deaths” came from the state health department’s Opioid and Substance Use Action Plan Data Dashboard. Deaths involve heroin, fentanyl, fentanyl analogues, or prescription opioids. Data is based on the county of residence, which may differ from where the death occurred. Population estimates came from national Census Bureau data.

Funding estimates for each county come from the North Carolina Opioid Settlements data dashboard and reflect funds from the settlement with Johnson & Johnson and the “Big Three” drug distributors (AmerisourceBergen, Cardinal Health, and McKesson).

Regional rates for opioid-related emergency department visits were calculated by dividing the sum of such visits from 2016 to 2021 by the sum of annual population estimates from 2016 to 2021. Emergency department visit counts come from the Colorado health department’s drug overdose dashboard and are for drug overdoses with “any opioid (includes prescription sources, fentanyl and heroin).” They are provided by the patient’s county of residence and were originally compiled by the Colorado Hospital Association.

For both the death rate and emergency department visit rate, regional populations were calculated by adding up the Census Bureau’s annual county totals for member counties. The regions are defined in Exhibit C of Colorado’s Memorandum of Understanding. Regional funding estimates come from the Colorado attorney general’s opioid settlement dashboard and reflect funds from settlements with McKinsey & Co., Johnson & Johnson, and the “Big Three” drug distributors (AmerisourceBergen, Cardinal Health, and McKesson).