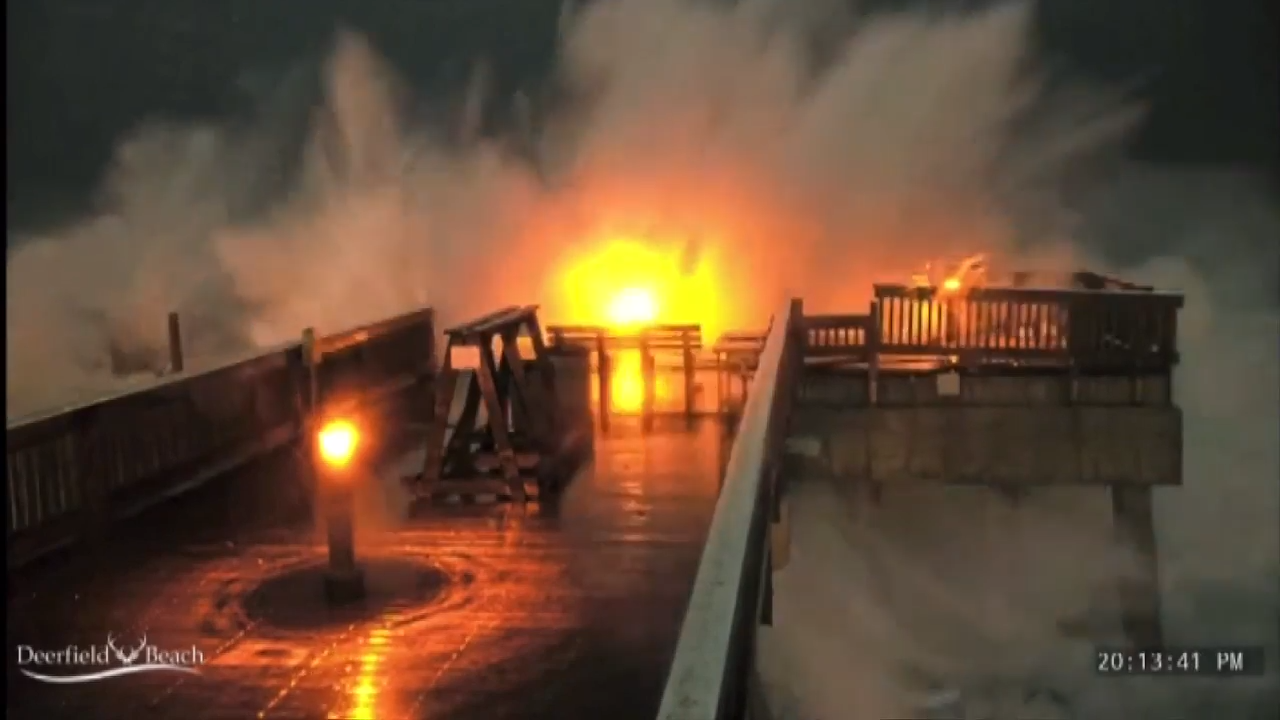 Hurricane Nicole officially made landfall, just south of Vero Beach, Thursday morning and has since weakened to a tropical storm. 7News had live team coverage of the storm as it passed through.

The central coast of Florida was pelted by rain as the tropical system crawled through. Winds, bending trees and shaking leaves were evident in the upper east coast of the sunshine state.

As of 5 a.m., the aftermath of the landfall brought calmness to Deerfield Beach, Lauderdale-by-the-Sea and Hollywood Beach, but not before damaging a few coastal structures before the storm itself weakened.

Video footage from EarthCam’s Lauderdale-by-the-Sea camera showed Anglin’s Fishing Pier, which has a portion of its structure damaged.

Turbulent waves were also seen in the area as the wind gusts from the storm passed by.

In Deerfield Beach, an iconic pier was pounded by waves all morning. 7News captured those swells collapsing onto the dock, taking pieces of the structure into the water and distorting the railing.

Many offices and waterfronts in the area are closed until Monday.

Gov. Ron DeSantis activated 600 National Guard members and 16,000 utility workers to be on standby at 3 a.m., Thursday as soon as the Hurricane made landfall.

The announcement came before more than 57,000 FPL customers lost power.

Storm surges are expected to reach three to five inches in the area of Deerfield Beach.

Hollywood Beach looked almost unrecognizable Thursday morning as just the day before, the tides combined with the storms from the wind caused sand to be pushed further inland.

Trash cans and litter filled the Broadwalk near the beach, while evidence of high tides was left behind on storefronts along the coast.

Overnight, the water from the tides passed the Broadwalk and seeped into parts of North Ocean Drive which caused flooding and led to police blocking off portions of the road.

Seaside structures collapsed in Daytona Beach as massive erosion from the storm damaged a bathroom facility.

A nearby road was also seen completely crumbled and washed out. All this happened Wednesday afternoon as Nicole’s winds topped 70 miles per hour.

Video footage from Volusia County showed a house suffering a similar fate as the erosion neared the abode to collapsing.

Meanwhile, in Cocoa Beach, it appeared to be gusty yet tolerable in the area Thursday morning. The day before, there was sand up to 100 feet before the sea as waves crashed along the pier.

At a pier, a few shingles came off buildings and benches have been turned over, but owners of the properties boarded up the previous day.

In Fort Piers, some are without power as the light wind and rain breeze through the city.

The worse has yet to come for the cities in Central Florida.