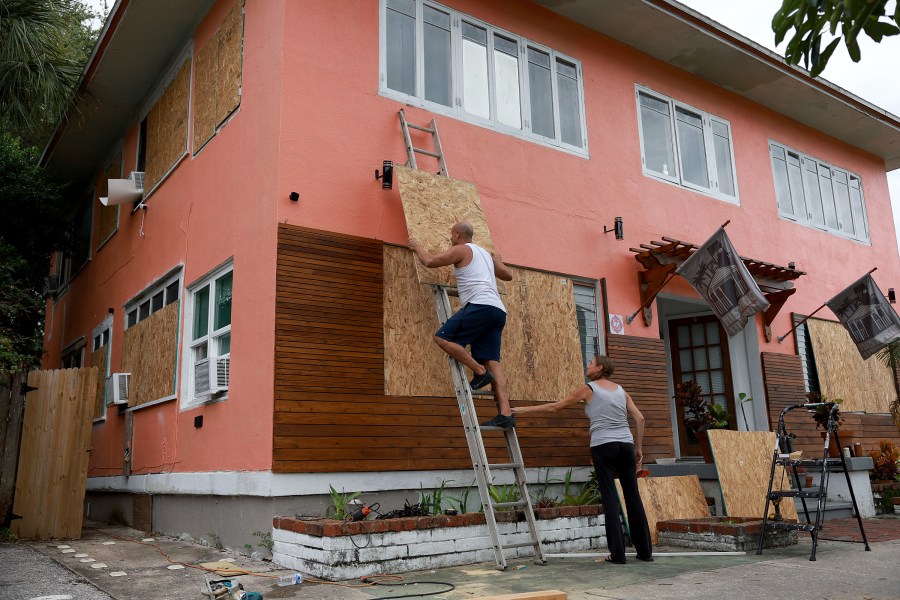 (NewsNation) — Hurricane Ian has strengthened into a Category 4 storm as it rages toward the Florida peninsula, where it is expected to make landfall over the Sarasota region, according to the U.S. National Hurricane Center (NHC).

Air Force hurricane hunters have found sustained winds of 155 mph, meaning Hurricane Ian is only 2 mph short of intensifying to a Category 5 storm (157 mph). Recent reports from NHC said conditions continue to rapidly deteriorate along the southwest coast of Florida.

Over 78,000 Floridians are now without power, according to poweroutage.us.

Early Wednesday morning, Air Force hurricane hunters discovered the change in storm intensity to a Category 4, saying that the hurricane is expected to cause “life-threatening storm surge, catastrophic winds and flooding.”

The NHC in Miami said at 5 a.m. ET that Ian now has top sustained winds of 140 mph and is centered about 75 miles west-southwest of Naples, Florida. It said Ian is moving north at a forward speed of 10 mph.


Hurricanes have caused hundreds of billions in damage

Winds and rain have begun intensifying, a day after Ian battered the western tip of Cuba, bringing down the electricity grid and leaving the entire island without power.

The major hurricane has prompted warnings of dangerous storm surge along the state’s heavily populated Gulf Coast from Bonita Beach to the Tampa Bay region.

Florida residents rushed to board up their homes, stash precious belongings on upper floors and flee.

Winds exceeding tropical-storm strength of 39 mph reached Florida by 3 a.m. and hurricane-force winds were expected in Florida well in advance of the eyewall moving inland, the Miami-based center said.

Conditions are rapidly developing over Florida’s west coast. There have been several reports of tornadoes and torrential rainfall as Ian approaches.

Evacuation orders have been issued for people in coastal communities, mobile homes and low-lying areas in 12 counties. In some areas, police were seen driving through the neighborhood urging those still in their homes to leave and seek shelter.

“It is a big storm, it is going to kick up a lot of water as it comes in,” DeSantis said in Sarasota, a coastal city of 57,000 in the storm’s projected path. He warned at a news conference: “This the kind of storm surge that is life-threatening.”

Ian’s forward movement slowed over the Gulf, enabling the storm to grow wider and stronger. A hurricane warning covering roughly 220 miles of the state included Fort Myers as well as Tampa and St. Petersburg, which could get their first direct hit by a major hurricane since 1921.

Forecasters said the storm surge could reach 12 feet if it peaks at high tide. Rainfall near the area of landfall could top 18 inches.

Airports in Tampa, St. Petersburg and Key West closed. Disney World theme parks and Sea World in Orlando all closed ahead of the storm.

The threat has also forced the Tampa Bay Buccaneers to pack up and head toward Miami to practice with the Dolphins. The Buccaneers’ Sunday night game at home against the Kansas City Chiefs was still scheduled as of Tuesday night, though the NFL is reviewing the possibility of moving the game to another stadium.

In a second news conference Tuesday, DeSantis said updated models of the hurricane now reflect the anticipated landfall of the storm over the Sarasota region, just south of Tampa.

“It’s still not set in stone,” DeSantis said. “I’d say anyone on the Gulf Coast (needs) to prepare for impact.”

He also said this storm is going to be different than storms in the past because forecasts have Ian slowing down when it hits land.

“Another factor that they are forecasting now, as it makes landfall … most of the forecasts have it slowing down to almost a crawl,” DeSantis explained. “What that means is that it’s going to dump an inordinate amount of rain.”

He said it is going to be a major water event in terms of the storm surge and flooding.

In a third news conference Tuesday night, DeSantis and other leaders from state emergency agencies said they stand at the ready to respond to residents’ needs and initiate recovery efforts once the storm passes.

Tolls have been suspended along interstates to allow for faster evacuations, and bridges will be closed when certain wind speeds are met, officials said.

As of Tuesday night, at least 5,000 Florida Guardsmen have been activated and pre-positioned at armories across the state.

DeSantis declared a state of emergency for the entire state of Florida on Saturday, freeing up resources for all residents. He also urged residents to be ready for a storm that could lash large swaths of the state with heavy rains, high winds and rising seas.

So far, 26 school districts have been closed, and more are expected to close as the storm approaches.

Residents waited upward of four hours to fill sandbags at one of three locations. Grocery store lines reached down the streets as many prepared for the storm.

Biden also declared an emergency, authorizing the Department of Homeland Security and the Federal Emergency Management Agency, or FEMA, to coordinate disaster relief and provide assistance to protect lives and property.

The president postponed a scheduled Sept. 27 trip to Florida due to the storm and NASA decided to forgo a planned Tuesday launch opportunity for its new moon rocket.

The agency advised Floridians to have hurricane plans in place and monitor updates of the storm’s evolving path.

Georgia Gov. Brian Kemp on Sunday ordered the activation of the State Operations Center for Monday, to prepare for any potential impact from Hurricane Ian later in the week.

NewsNation affiliate and the Associated Press contributed to this report.