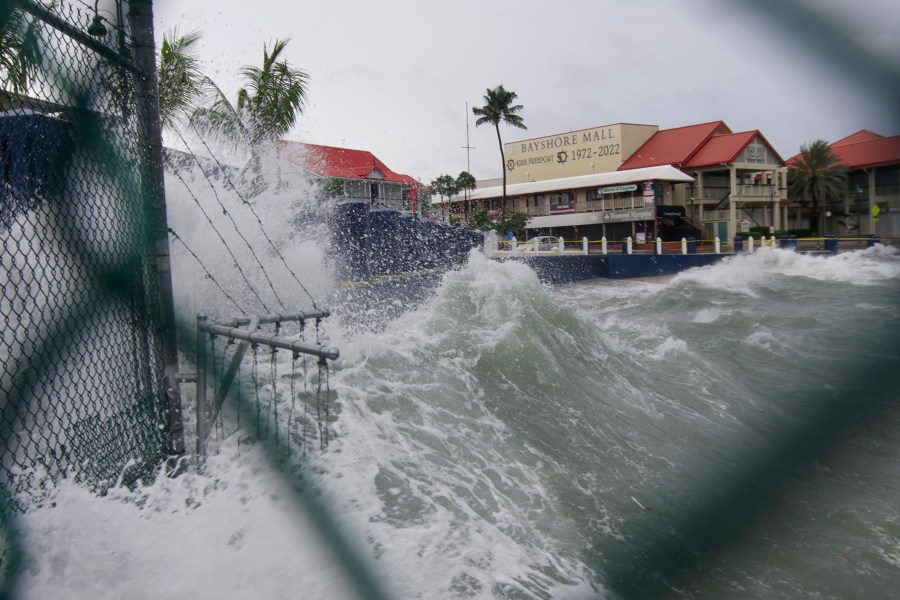 (NewsNation) — Hurricane Ian made landfall in Cuba early Tuesday morning as a Category 3 storm with sustained winds of 125 mph, according to the National Hurricane Center.

Ian continues to intensify as it passed through Cuba as it headed toward Florida’s west coast, where it is expected to make landfall as a Category 4 hurricane with top winds of 140 mph.

Rain and winds lashed Cuba’s western tip, where authorities have evacuated 50,000 people. Officials set up 55 shelters, rushed in emergency personnel and took steps to protect crops in Cuba’s main tobacco-growing region. NHC said the island’s west coast could see as much as 14 feet of storm surge.

In its 5 a.m. advisory, the NHC said Ian was about 175 miles south-southwest of the Dry Tortugas and about 5 miles south of Pinar del Río, Cuba, packing maximum sustained winds of 125 mph.

The NHC issued a hurricane warning for Tampa Bay Monday night. This means hurricane conditions — sustained winds of 74 mph or higher — are expected in the area sometime in the next 48 hours.

The path would put Ian just west of the Florida Keys Tuesday evening and near the west coast of Florida in the hurricane warning area on Wednesday and Thursday.

The area could see 12 to 16 inches of rain, with some areas seeing isolated amounts of up to 24 inches. The heavy rainfall could lead to considerable flash and urban flooding and prolonged river flooding. A few tornadoes will be possible across parts of Florida Tuesday and Wednesday, the NHC said.

It’s been more than a century since a major storm like Hurricane Ian has struck the Tampa Bay area. Many residents live in low-lying neighborhoods that are highly susceptible to storm surges and flooding.

Several Tampa Bay area counties issued evacuation orders on Monday. Residents living in Zone A in Hillsborough County, Zone A in Manatee County, zones A, B and C in Pinellas County and in Level A in Sarasota County are affected, according to NewsNation affiliate WFLA.

Tampa Bay is also under a storm surge warning, meaning the storm could raise water levels above normal tides.

The storm is forcing people to evacuate, but also reducing some of their options. The Tampa Airport announced it would cease operations at 5 a.m. Tuesday to prepare the facility for the brutal storm. A statement from the airport did not include a potential reopening time — only a promise that damage assessments would begin as soon as it was safe.

The threat has also forced the Tampa Bay Buccaneers to pack up and head toward Miami to practice with the Dolphins. The team’s marquee Oct. 2 game at home against the Kansas City Chiefs is still on as of Monday night.

Gov. Ron DeSantis declared a state of emergency for the entire state of Florida on Saturday, freeing up resources for all residents. He also urged residents to be ready for a storm that could lash large swaths of the state with heavy rains, high winds and rising seas.

“We encourage all Floridians to make their preparations,” DeSantis said in a statement.

Tampa Mayor Jane Castor was also preparing her city for the impact of the storm.

“No doubt we’re going to feel the effects. Just how severe the effects are remain to be seen. So what we are asking is everyone to be prepared,” Castor said.

On Monday, Hillsborough County activated 40 shelters for residents, one of them a local elementary school.

“Please treat this storm seriously. It’s the real deal. This is not a drill,” Hillsborough County Emergency Management Director Timothy Dudley said at a Monday news conference on storm preparations in Tampa.

Residents waited upward of four hours to fill sandbags at one of three locations. Grocery store lines reached down the streets as many prepared for the storm.

President Joe Biden also declared an emergency, authorizing the Department of Homeland Security and the Federal Emergency Management Agency, or FEMA, to coordinate disaster relief and provide assistance to protect lives and property.

The president postponed a scheduled Sept. 27 trip to Florida due to the storm and NASA decided to forgo a planned Tuesday launch opportunity for its new moon rocket.

The agency advised Floridians to have hurricane plans in place and monitor updates of the storm’s evolving path.

Georgia Gov. Brian Kemp on Sunday ordered the activation of the State Operations Center for Monday, to prepare for any potential impact from Hurricane Ian later in the week.

NewsNation affiliate WFLA and the Associated Press contributed to this report.