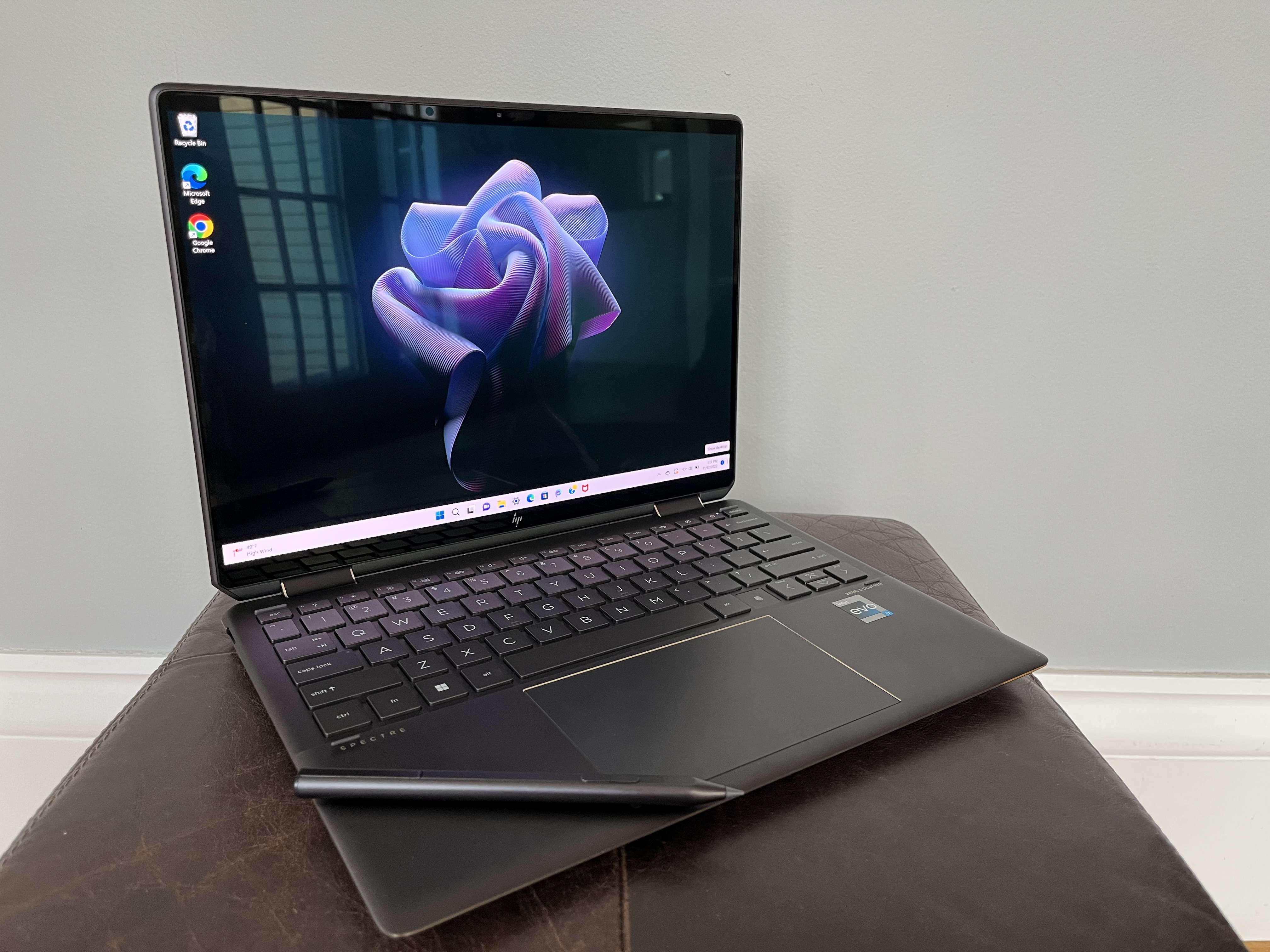 It’s neither the fastest nor the longest running, but the Spectre x360 14 remains one of our favorite business convertibles for its stunning design and display.

With the latest iteration of its premium Spectre x360 14, HP adds two new premium features not found on last year’s convertible alongside the requisite update to 12th-generation Intel silicon. The biggest addition is the high-resolution OLED panel that delivers exceptional image quality. The second addition is a high-resolution webcam, moving from an underwhelming 720p camera to a crisp and dynamic 1080p webcam.

The Spectre x360’s overall design remains unchanged. The all-metal chassis with gold accents offers a solid feel and luxurious looks, while the display’s 3:2 aspect ratio is geared toward business use rather than entertainment pursuits that would benefit from a wider screen. It’s still a tad heavy for a 14-inch convertible, and the battery life is shorter than last year’s model, but the Spectre remains a great pick for executive and other professionals looking for a portable and versatile two-in-one convertible.

This year’s Spectre x360 trots out the same looks as last year’s model and remains a stunner. The all-metal chassis boasts a gorgeous, sophisticated design and rugged feel. There are three color options — silver, black, and a deep blue. (The latter two colors add $15 to the bill.) We received it in black. With the matte finish, it has subtle brown undertones that gives it a unique look among a sea of silver brushed aluminum laptops. The gem-cut edges and other gold accents create a pleasing contrast with the matte black surfaces.

The chassis remains the same as last year’s model and therefore the weight stays the same at three pounds. That’s a bit heavy for this class of 2-in-1, but most are close to three pounds. The Dell XPS 13 2-in-1, for example, with its 13.4-inch 16:10 display weighs 2.9 pounds. With the added heft, however, comes a solid feel. There is nothing flimsy about the Spectre x360.

When we looked at the Spectre x360 last year, it featured an IPS panel with a 1920×1280-pixel resolution and a boxy 3:2 aspect ratio. An 3000×2000 OLED model was sold as a Best Buy exclusive, which you might have missed. Now the OLED display is available direct from HP. It adds a reasonable $110 to the price of the system. It’s well worth the price. The OLED panel delivers incredible contrast with perfect blacks and bright whites. Colors are accurate and vivid. And the 3000×2000 resolution across the 13.5-inch panel creates a sharp image with crisp text.

The display’s 3:2 aspect ratio is taller than a 16:10 or 16:9 widescreen. Movies and shows don’t fit as well as they do on a wider screen, but the boxier ratio is suited well for browsing the web and working on long documents. The 3:2 display is also a good fit in tablet mode. The squarer shape makes it feel more like an iPad than using a laptop spun around.

The touch display features pen support, and HP includes its Rechargeable MPP2.0 Tilt Pen. Tapping, swiping, and scribbling on the display felt natural with both a fingertip and the pen. There’s no garage for the pen, but it connects magnetically to the side of the system.

Befitting of the premium Spectre x360 are its four speakers that produce premium sound. The speakers create dynamic audio with crisp highs and a bit of a bass response. The audio begins to lose some clarity when you push the volume past 80% but at that level there’s still enough oomph to fill a small room.

A 720p webcam has no place on a premium Spectre model, and HP made the move to a 1080p camera with this year’s Spectre x360. It produces a clean, well-balanced image that has none of the grainy blotchiness of a 720p cam. If Zoom meetings and other video calls are a large part of your job, the 1080p will have you looking clearer to co-workers and clients. The camera has IR capabilities so you can log into the machine via facial recognition. And if you’d rather use your finger instead of your face, there’s a fingerprint reader tucked in between the spacebar and arrow keys at the bottom of the keyboard. Both biometric methods worked flawlessly.

The keyboard sacrifices the right Control key for the fingerprint reader, leaving only a Control key in the left corner. The keys offer a snappy response and quiet action for an overall pleasing and premium typing experience. One change from last year’s model — HP got rid of the right-side column of Home, Page Up/Down, and End keys. Those keys are now doubled mapped to the four arrow keys, which may disappoint some typists. In the row of Function keys at the top, there’s a key to cycle through the keyboard’s two-level backlight and two others to mute the microphone and cover the camera. When the camera’s physical cover is in place, you can see its white and black stripes to give you peace of mind that your privacy is protected. The mute and camera shutter keys themselves also have orange LEDs to give you visual proof that each device is deactivated.

The gold-edged touchpad offers a quiet, firm click response and accurate recording of mousing gestures. It’s near perfect. If I had a nit to pick, it would be the semi-glossy finish doesn’t offer as smooth gliding as would a more matte finish.

The useful port selection remains the same as last year’s model. There’s a pair of USB-C Thunderbolt 4 ports, a USB Type-A port, an audio jack, and a microSD card reader. One of the Thunderbolt 4 ports and the headphone jack are located on each of the back corners of the system. These corners are trimmed so each port sits on the diagonal. It’s an unusual design point, and one I doubt will catch on because it makes it a bit harder to access these ports than if they were simply located on the side. And if I could, I would swap out the headphone jack and have a Thunderbolt 4 port in each corner. Not only would I be able to charge the Spectre x360 from either side, but the headphone jack would be closer to the front of the system and my ears.

One last note on the power adapter. It also lives up to the premium Spectre name. The power brick is tiny and easily portable, and the cord is braided so it never tangles.

We compared the Spectre x360’s performance to a mix of similarly sized laptops with 12th-gen Intel Core processors from both the efficient 15-watt U series and more balanced 28-watt P series that sits between the U series and high-powered 45-watt P series. Rounding out the charts are a couple of laptops based on AMD’s Ryzen 7 5800U processor and a Dell XPS 13 based on an 11th-gen Core i7.

The system felt peppy during our time with it and operated in near silence. We did see the battery life decline from last year’s model; the OLED panel is the likely cause for the shorter running time (more on that below).

Our first benchmark is PCMark 10, which measures performance on everyday computing work including office productivity tasks, web browsing, and video chats. All of the laptops here are overqualified for running general office apps. The Spectre x360 finished in the middle of the pack. With only two performance cores in the Core i7-1255U, the system couldn’t keep pace with the two AMD-based laptops — the Ryzen 7 5800U has eight processing cores and 16 processing threads. And the next two finishers feature the Core i7-1260P, which has four performance cores along with eight efficiency cores and a total of 16 processing threads.

Our HandBrake benchmark tests how a laptop is able to handle crushing CPU loads over a lengthy period—in this case, transcoding a 30GB MKV file to a format suitable for Android tablets using HandBrake, the free video encoding utility. The Spectre x360 again finished with a middling result and found itself well off the pace set by the systems with CPUs with more processing cores and threads.

Next up is Cinebench, another CPU-intensive test but one that renders a complex 2D scene over a short period of time. The Spectre x360’s Cinebench result is underwhelming. Its U series CPU is built for efficiency and not cranking through multithreaded multimedia applications. The Spectre x360 is a better fit for executives and other business users than creative professionals.

On our 3DMark benchmark, none of the laptops here — the Spectre x360 included — distinguished themselves. But that’s hardly a surprise given they all features integrated graphics.

To test a laptop’s battery life, we loop a 4K video using Windows 11’s Movies & TV app, with the laptop set to Airplane mode and earbuds plugged in. We set the screen brightness at a relatively bright 250 nits to 260 nits, which is a good brightness for watching a movie in an office with the lights on. The Spectre x360 lasted for more than 11 hours, which will get you through the longest workdays without needing to retreat to a wall outlet. That’s an impressive figure, but other models offer runtimes that are hours longer.

Last year’s Spectre x360 ran for more than three hours longer than this year’s model. With both systems featuring the same 66.5Whr battery, I suspect the culprit of the shorter runtime is the high-resolution OLED display. Even though an OLED can turn off individual pixels, a greater number of pixels means a greater drain on the battery. And we’ve yet to see any benefit in terms of battery life from an OLED laptop. In fact, we’ve generally seen that an OLED panel has a slight adverse effect on a laptop’s battery life.

Even with the decrease in battery life, we welcome the addition of the OLED display to the Spectre x360. It’s one of those features that once you’ve experienced it, you will never go back to the old way of a plain-Jane IPS LCD display. The gains in contrast and color dynamics are just too great. Plus, with OLED displays beginning to trickle down to midrange laptops, buyers should certainly expect an OLED on a high-end model like the Spectre x360.

OLED aside, it’s one of the best looking 2-in-1 convertibles on the market. The brownish-black chassis is unique without being garish, and the all-metal chassis is rock-solid if a tad heavy. With its U series processor and integrated graphics, it’s a better fit for general office tasks than creative work. Despite the drop in battery life, the Spectre x360 remains one of our favorite 2-in-1 business convertibles.