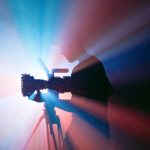 “Lights, camera, action” may not sound like the typical start to your company’s weekly all-hands, but at some tech companies, it’s becoming the norm.

For better or worse, the way we work has changed dramatically in the last two years, and with these changes have come new challenges for businesses. While tools like Slack, Zoom, Microsoft Teams, and Google Hangouts have become second nature in a remote-first world, executives are finding these tools less conducive to forming real connections with employees, selling a mission, and generally cultivating a strong work culture.

I think the trend we’re seeing is companies starting to move up that production chain towards more engaging live content.”

Like the pandemic’s acceleration of remote-first solutions like virtual school and telehealth, the post-COVID era has given rise to another trend, namely TV-ifying the traditional video conferencing experience, where large meetings look less like a standard Zoom call and more like a high-production show. Think studio lighting, 4K cameras, crisp audio feeds, and glitzy graphics⁠—all for the monthly town hall.

It’s an experiment that Canadian tech mainstay Shopify underwent long before the pandemic began, and has since captured the attention of leaders from companies like Slack and Squarespace. As more companies embrace the long-term prospect of remote work, this appears to be a trend that isn’t slowing down.

Stewart Gilmour, a film and television graduate from Humber College, was one of the first recruits to Shopify’s live stream team. He said when he first took the role in 2017 that it consisted of roughly four people responsible for streaming leadership communications and company town halls to Shopify’s distributed teams.

“Shopify had a very big interest in uniting all of their offices and all of their existing remote culture, which was all before the pandemic hit,” he told BetaKit.

These shows, Gilmour said, were usually hosted by five dedicated broadcast team members and streamed to roughly 5,000 employees across three time zones. Zack Duncan, who leads the broadcast team at Shopify, said in a 2020 interview featured in a blog post from NewTek that the team’s main goal is to give employees “an immersive experience and feel that they are all valued members of this company, even if they aren’t sitting in the front row.”

“I feel like our level of production was that of a live television broadcast, if not better.”

Duncan said the team covers product demos, show and tells, and Ask Me Anythings in a “Ted Talk”-style format. “Our mission as a broadcast team is to allow you to stay connected to the office spaces and not feel isolated just because you decided to work remotely,” Duncan told NewTek.

Perhaps most notable about the live streams is that they were all planned and produced remotely, managing to stream with less than 10 seconds of latency, according to Gilmour. The team used broadcast booths located in Shopify’s offices in Ottawa, Toronto, Kitchener-Waterloo, and Montréal, but typically, the talent, run of the show, and streaming were handled remotely.

“This is where Shopify really pulled together a wicked group of people,” Gilmour said. “It wasn’t without its struggles. We definitely had a couple of months of trial and error to figure out the best plan to get these completely virtual shows happening.”

Over the next two years, the Shopify broadcast team grew, not only in size but also capabilities. Gilmour said the team’s dedicated PIT (production infrastructure technology) crew helped set up a “home suite” for Shopify president Harley Finkelstein and assisted with his media appearances on shows like Mad Money, as well as Shopify’s Reunite conference in 2021.

As the COVID-19 pandemic shuttered Shopify’s offices in early 2020 (the company was one of the first to announce it would be a permanently remote company), the pace of the broadcast team’s live shows didn’t slow down. Gilmour said the team streamed up to 17 shows per week in the pandemic’s initial months, and by August 2020, the team had established a new remote live format to make the shows even more Hollywood-esque.

By August 2020, Gilmour said the team had graphics professionals, used virtual computers to host shows, and hired more operators that made show turnarounds even faster. “It became like clockwork,” Gilmour noted.

“I feel like our level of production was that of a live television broadcast, if not better,” he added.

Goldlist has followed the evolution of company meetings while building Venue, which recently graduated from Y Combinator. The CEO noted that high production value is a cornerstone of this TV-ification trend. For many years, teams relied on crackly dial-in conference calls; today, companies like Shopify offer a slick, crisp, seamless video feed more akin to a talk show than a standard meeting.

“It’s like, ‘Oh, this is what I would elect to watch in my free time; this is cool,’” Goldlist added. “Even if we’re not there yet, I think the trend we’re seeing is companies starting to move up that production chain towards more engaging live content.”

Goldlist’s company provides a video conferencing platform that aims to make larger team meetings more interactive. It offers the same engagement tools you would find on a Twitch stream, with emoji bursts, background music, and GIFs. Venue counts Shopify and Wealthsimple among its customers (Goldlist is a former Wealthsimple employee).

Gilmour left his job at Shopify in January 2022 for Wealthsimple, where he works as an A/V specialist. By the end of 2020, Gilmour said Shopify’s live broadcasts were reaching up to 70 percent of the company’s 10,000 employees per stream, and the broadcast team grew commensurately. According to Gilmour, roughly one-third of the team came from traditional TV or film production work histories, with others coming from creative or event backgrounds.

“It became more like an agency,” he said, noting that the broadcast team became siloed between internal and external communications, and application processes were needed for team members looking to run certain events.

Since Gilmour’s departure, the Shopify broadcast team has contracted. In July, Shopify laid off one-tenth of its workforce, roughly 1,000 employees, citing a cooling in the e-commerce boom that fueled the company’s growth over the last two years.

Former Shopify broadcast technician Max Siegel, who says he was let go as part of that round of layoffs, said in a tweet that Shopify’s broadcast team was reduced from 45 to 13 people. Shopify declined to provide comment for this story.

Shopify’s broadcast team might be smaller than it was a year ago, but the TV-ification trend has only proliferated in the tech sector.

Airbnb has its own similar live video team called OnAir. According to a job posting from the online home rentals company, OnAir produces internal and external video projects, live streams and live-to-press engagements. The team’s function is to “drive the production and distribution of impeccable live and on-demand video content” that connects hosts, guests, and employees with Airbnb’s “most critical messaging.”

Wealthsimple, which has recently upped the quality of its video marketing and online magazine content, appears to have also taken notice of the trend. Gilmour’s current role at Wealthsimple is to set a new protocol for internal video communications, and he believes his experience at Shopify was one of his major selling points to the FinTech firm.

​​“I think a lot of companies are trending towards having internal communications look like this in the tech space, rather than a regular Zoom call or a Google Meet,” Gilmour added.

TV-ifying remote meetings may seem easy for tech giants like Shopify, but even for the most successful companies hiring a dedicated in-house broadcast team is not always tenable, nor is it the only option. Canadian unicorn ApplyBoard also jumped on the trend last month when the Kitchener-Waterloo EdTech firm opted for a hybrid format for its bi-monthly, company-wide Vision Meeting.

ApplyBoard utilized its existing internal resources to put the event on rather than hiring a dedicated broadcast team or agency. These resources included ApplyBoard’s office facilities team, video marketing team, and IT team. A spokesperson for ApplyBoard told BetaKit the company plans to prioritize this hybrid format for future Vision Meetings.

Goldlist said it’s likely some companies will look to upskill or re-skill certain teams in this way as the TV-ification trend takes shape, particularly traditional roles that once were necessary for in-person work.

“It was an incredible feeling to have many team members gather both in-person and virtually for our Vision Meeting in August,” Martin Basiri, co-founder and CEO of ApplyBoard, said in an emailed statement to BetaKit. “The energy of the meeting was invigorating, and it allowed all team members to feel connected.”

As more companies take interest in levelling up their internal meetings, they need talent as well as new tools to make that happen, and this is where companies like Venue come in.

Venue recently raised $4 million in seed financing from a few notable investors, including Stewart Butterfield, the CEO and co-founder of Slack, Squarespace founder and CEO Anthony Casalena and Job van der Voort, the founder and CEO of Remote.com. While the companies did not invest directly, it’s a sign that their leaders are, at the very least, taking this trend seriously.

However, with Shopify reducing its broadcast team, it’s unclear whether the TV-ification of remote meetings will remain a priority for the company long-term. And though other companies appear to have taken notice of the TV-ification trend, the current state of tech could make them more hesitant to stretch already constrained budgets (Wealthsimple, for example, made layoffs of its own earlier this year, citing “changes to market conditions”).

Still, many other tech firms are staying remote post-pandemic, including Shopify, which means broadcast teams could bridge the gap for tech companies as they look to create and promote culture from a distance.

“I don’t think the trend is over,” Gilmour said. “I think there’s an opportunity for other companies to pick these people up if they want to invest in levelling up their internal communications.”

Gilmour believes there is an opportunity for film and television professionals to go indie or create their own agencies in this emerging, niche space. Goldlist believes that tech companies taking the idea more seriously will likely build in-house teams in the style of Shopify.

From remote learning to telehealth, COVID-19 birthed a number of new experiments in the tech sector. Goldlist sees this post-COVID era like the dot com bubble burst in the early 2000s; while it may have been a death blow to many tech experiments, it was also a “great filter” for the companies that endured. He said it will be interesting to see whether the TV-ification of remote meetings will endure in the tech world through the post-pandemic era and beyond.

“[At that time], some people thought e-commerce was just a fad that wouldn’t survive, and today Amazon is a $1 trillion business. But grocery delivery trucks didn’t make it,” Goldlist said. “I’ll be curious to see which post-COVID trends stick and which don’t over the next 10 years too.”

The post How tech leaders like Shopify are TV-ifying the traditional company meeting first appeared on BetaKit.