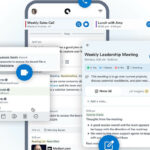 Ottawa-based Nook Technologies has secured a $2.39 million CAD ($1.75 million USD) pre-seed funding round as the startup brings its note-taking app into private beta.

The financing, which is the startup’s first outside capital since it was founded last year, came from a couple of institutional, angel investors, and Nook employees.

“Our mission is to help silence the noise that people have because they’re getting information from so many different places.”

Nook plans to use the capital to continue iterating on its note-taking app, which the startup hopes to build into an Evernote competitor.

The pre-seed round was led by Ottawa-based Mistral Venture Partners, which had previously invested in Nook’s creators’ prior startup, Foko Retail.

San Francisco-based venture firm Renegade Partners also invested in the round, as did a group of Nook employees that includes CEO Marc Gringas.

Angel investors that took part in Nook’s round include Sébastien Marineau, vice president of software at Apple; Scott Roberts, a vice president at LinkedIn; Mike Potter, co-founder and CEO of Rewind; as well as Louis Kearns, a former general manager at Shopify alongside Mohammad Hashemi, who secured $8.5 million for his own startup, Gadget, a last year.

Nook was launched in early January 2021 by former employees of social calendar app Tungle, which was acquired by BlackBerry in 2011, and Foko Retail, which was bought by WorkForce Software in early 2021.

Nook was originally launched as a calendar and collaboration platform for individuals, teams, and companies. However, as Nook gained users, it shifted focus to note-taking as it was a pain point that many of its customers expressed.

Prior to the pre-seed round, Nook was solely funded by its creators after the success of their previous exits.

Gringas told BetaKit that the startup had not originally planned to raise outside capital, but after pulling together a network of experts—like Potter, Kearns, and Hashemi—to help Nook build its app, those parties expressed interest in investing.

Even amid a tougher fundraising market, Gringas claimed that Nook raised more money than it first set out to as interest from individuals grew. Nook claims it had initially planned to raise between $1 million and $1.2 million USD.

The pre-seed capital will be used to help the eight-person Nook team onboard its first customers to the note taking app. Nook has a waitlist and is onboarding individual users with the goal of continuing to iterate on the product based on feedback.

Earlier this year, Nook told BetaKit that it expected to officially launch the app in the fall. Gringas noted that Nook is now focused on its private beta and will roll out the app to a broader base of users when the startup feels it’s ready.

With the Ottawa startup focused on taking on the Evernotes of the world, it’s going to take time to get there.

“Our mission is to help silence the noise that people have because they’re getting information from so many different places,” said Gringas. “And so if we can silence the noise, then they’ll be able to think clearly and be more productive … So we’re taking the time to build an app that’s going to deliver on that mission, and we’ll get it when we get it.”