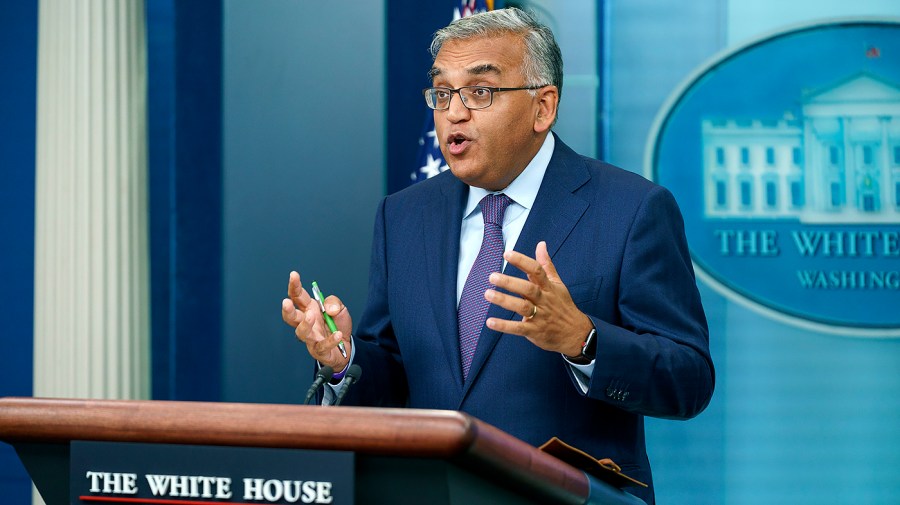 “People are gathering, as they should, because it’s really important to gather with family and friends,” Jha said on ABC’s “This Week” with host Martha Raddatz.

COVID-19 cases have steadily increased since the Thanksgiving holiday, which also comes as the nation grapples with large numbers of flu and respiratory syncytial virus (RSV) cases.

Jha said he was not totally surprised by the rise in COVID-19 cases, given the return of colder air that spurred major waves in the two past winters as well as an increasing number of gatherings during the holidays.

“That combination is what is driving the increase,” Jha said on ABC.

“The good news here is that we can prevent those infections from turning into serious illness if people go out and get that updated bivalent vaccine,” he continued. “The updated vaccine is essential for keeping people out of the hospital. So we’re making the case that we’re at a point where it’s safe to gather, but you still have things to do. If we don’t do those things, obviously things can get much worse.”

Jha did not explicitly reference masking as a part of that strategy, although Raddatz mentioned masks during her questioning. Jha instead stressed the updated booster and COVID-19 tests to protect against the virus’s spread.

“It is a comprehensive strategy: testing, treatment, vaccines,” he said. “Our job is to make sure those things are widely available, easily accessible, they remain free for Americans. We’re going to continue making that case.”

After the Biden administration previously paused a program for households to receive free COVID-19 tests, citing a lack of funding, officials reopened the portal last week, allowing each household to order four additional rapid tests amid the increase in cases.

Beyond the tests, Jha and other Biden administration health officials have made increasing booster uptake as a key prong of their winter COVID-19 strategy.

But they have struggled to convince much of the public to receive the new jab, which is designed to provide better protection against new variants.

As of Sunday, 14 percent of people aged 5 and above have received the bivalent booster, according to the Centers for Disease Control and Prevention.

Among those who are at least 65 years old, whom officials stress are more at risk for serious infection, about 36 percent of the population has received the updated booster.

Jha on ABC said some Americans seem “confused” about whether they need the shot, but he urged anyone who received their most recent dose at least six months ago to get the updated jab.