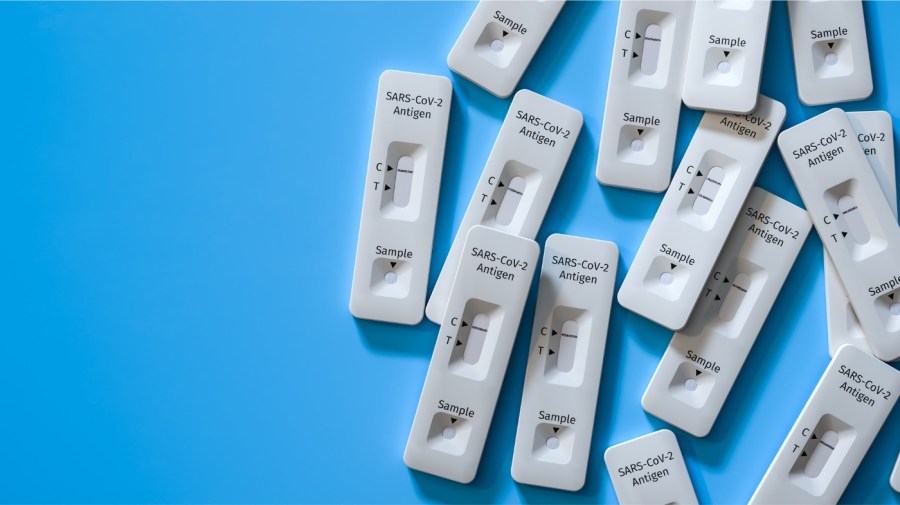 Today in health, lagging booster rates in nursing homes could portend a difficult winter for seniors.

But first: you can once again get free COVID-19 tests through the mail, less than six months after the program was suspended.

Welcome to Overnight Health Care, where we’re following the latest moves on policy and news affecting your health. For The Hill, we’re Nathaniel Weixel and Joseph Choi. Someone forward you this newsletter? Sign up here or in the box below.

COVID tests by mail are back

The Biden administration is restarting its program to send free COVID-19 testing kits through the U.S. Mail to any households that request them, as part of a broader plan to head off a surge in infections this winter.

The White House on Thursday said households can begin ordering a total of four at-home tests from the COVIDTests.gov website to be mailed directly to them for free, regardless of how many tests they have ordered previously.

Round 2: The White House first began sending out the kits last January during the peak of the omicron wave, but the program was halted at the beginning of September due to a lack of funding from Congress.

Administration officials at the time indicated they were concerned the stockpile of tests would run out before the winter.

By the time the program ended, the federal government distributed an estimated
600 million tests.

Funding questions: The administration has once again managed to scrounge up additional funding for a COVID response program after pleading poverty, a move that is not likely to endear officials to Republicans in Congress.

COVID-19 infections and hospitalizations are on the rise, posing a major threat to nursing home residents and staff who are not up to date on their COVID-19 vaccinations.

The elderly population is also most at risk from other respiratory viruses like influenza and respiratory syncytial virus, which are seeing extremely high rates of transmission much earlier than in past years and straining hospitals across the country.

“The prospect of not being able to get into a hospital when you need it is scary,” said Katie Smith Sloan, president of LeadingAge, which represents nonprofit nursing homes. “We’re dealing with flu season colliding with the holidays, and it’s the perfect storm.”

The Biden administration recently launched a year-end sprint to improve lagging COVID-19 vaccination rates, with a focus on nursing facilities.

But experts and industry groups said the barriers nursing homes are facing have not changed since the first round of boosters last year, including pandemic fatigue, mixed messaging about the vaccine’s effectiveness and strict requirements about vaccine administration.

Nonprofit hospitals and ambulatory health care services are seeing a slight improvement with longstanding staffing shortages, according to new research, though the industry is still dealing with high rates of workers leaving the field.

The incremental changes may indicate the health care industry is on the mend slightly from staffing shortage issues seen since the beginning of the COVID-19 pandemic.

More room to improve: But the job openings rate recorded in October (8.7 percent) is still notably higher than the average seen in the previous decade (4.2 percent from 2010-19), the report notes, and the unemployment rate “still indicates a challenging environment.”

The health care and social assistance sector is also still seeing a high volume of quits as workers exit the field. In October, the quit rate was at 2.5 percent, while the 2010-19 average was 1.6 percent.

Parkinson’s disease is more common than previous research has shown, affecting
50 percent more people annually than past estimates, according to a new study published Thursday in the academic journal Nature.

Prior research estimated 60,000 people in North America annually were diagnosed with Parkinson’s disease, but the actual incidence rate is 1.5 times higher at
90,000 per year, according to the study.

Researchers found the age-related degenerative brain condition was more common than previously known among adults aged 45 and older, and in another age set of
65 and older, while the incidence rate was higher for men than women.

Democratic Sens. Tammy Duckworth (Ill.) and Patty Murray (Wash.) and Rep. Susan Wild (D-Pa.) introduced the “Right to Build Families Act,” which would bar states from limiting a person’s access to fertility treatments or a health care provider’s ability to offer such services.

The bill introduced on Thursday would also give the Department of Justice the authority to take civil action against entities that are found to violate the law.

When abortion bans went into effect across multiple states earlier this year with the overturning of Roe, infertility patients and health care providers expressed concerns that treatments like IVF could be threatened.

Bubbling GOP interest: Some Republican state lawmakers have already discussed further regulation of IVF in the post-Roe era. ProPublica obtained recordings of a meeting between Tennessee GOP lawmakers and anti-abortion activists in which they raised the possibility of enacting regulations on contraception and IVF in a few years.

Former Vice President Mike Pence, however, voiced his support for protecting IVF in an interview last month, saying, “I fully support fertility treatments and I think they deserve the protection of the law,” while appearing on CBS’s “Face the Nation.” Pence and his wife Karen Pence underwent multiple rounds of IVF treatments themselves.

That’s it for today, thanks for reading. Check out The Hill’s Health Care page for the latest news and coverage. See you tomorrow.