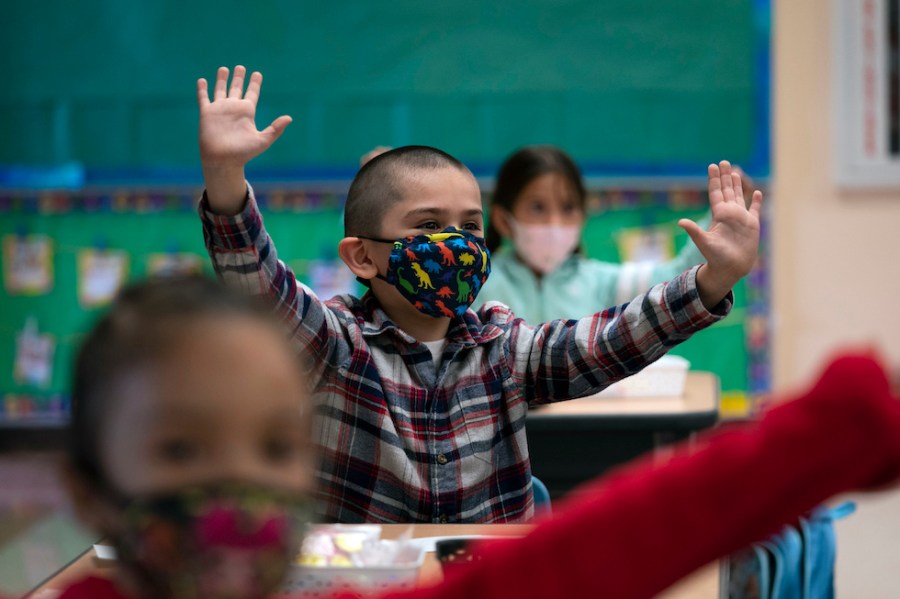 🎭 Another COVID casualty on Broadway: The longest running show in Broadway history is closing this winter. Phantom of the Opera opened in January 1988 and will close in February.

Welcome to Overnight Health Care, where we’re following the latest moves on policy and news affecting your health. For The Hill, we’re Nathaniel Weixel and Joseph Choi. Someone forward you this newsletter? Subscribe here.

The Office of Head Start (OHS), the federal program within the Department of Health and Human Services (HHS) that provides preschool and childcare services to low-income families, announced Friday that it will soon be dropping its universal masking rule for its grant recipients.

“All in all, we’re pleased to see this. We’ve been really pushing and advocating for some clarity on the masking and vaccine interim final rule for several months now. And so we’re very pleased that it’s being updated,” said Tommy Sheridan, deputy director of the National Head Start Association (NHSA).

However, children and teachers at Head Start programs have still been required to adhere to mandatory mask-wearing. This is despite the updated CDC guidance that stated masks should mainly be considered in high-risk areas or for students who are immunocompromised.

In their communication to Head Start grantees, OHS and ACF encouraged centers to “continue using a combination of tools to reduce COVID-19 risks,” pointing to the more recent CDC guidance.

West Virginia Gov. Jim Justice (R) signed an abortion ban into law on Friday that will only permit the procedure in cases of rape, incest or medical emergencies.

Both houses of the state’s legislature approved the ban on Tuesday, with the state Senate passing it 22-7 and the state House passing it 77-17. With Justice’s signature, the law goes into effect immediately while its criminal penalties will go into effect in 90 days.

Provisions: The law bans abortion entirely unless the patient is a victim of rape or incest, has informed a law enforcement agency and receives the procedure no later than the eighth week of pregnancy. Minors in either of those circumstances can receive an abortion up to 14 weeks of pregnancy if they report it to law enforcement and receive treatment from a licensed professional or hospital.

Abortions are also allowed for “medical emergencies” and if the fetus is not medically viable.

Penalties: Licensed providers who are found to have illegally performed an abortion are not subject to imprisonment but could lose their medical license. If anyone who is not licensed to perform an abortion, such as nurses, is found to have done so, they could face felony charges and three to 10 years in prison, starting in 90 days.

A new autoimmune therapy harnesses a person’s own cells to find and correct other defective cells – an answer for patients who haven’t responded to other treatments and a possible cure for diseases like lupus.

In a study published in Thursday Nature, researchers genetically modified and reinjected immune cells from patients – meaning each person got their own cells back as a treatment. In this type of therapy, called CAR T cell therapy, T cells are changed to recognize a specific protein on the surface of B cells, the ones that produce antibodies that wrongly attack healthy cells.

Autoimmune diseases are conditions where the body’s immune system attacks other cells in the body and causes symptoms like inflammation. This happens through autoantibodies, or antibodies that attack the self, produced by a type of white blood known as B cells.

After about 100 days, the patients were able to produce new B cells that didn’t make autoantibodies. Patients had drug-free remission for a median of eight months post-treatment, up to 12 months.

Air pollution is detrimental to lung health, especially if it is indoors and constant. For example, exposure to secondhand smoke from cigarettes can trigger asthma attacks in children. New research suggests that the effects might even be felt one generation removed.

A study published in the European Respiratory Journal looks at data on 1,689 kids who grew up in Tasmania from the Tasmanian Longitudinal Health Study, which goes back to 1968.

They also had information about whether the children’s fathers were exposed to secondhand smoke from their parents when they were under the age of 15.

The researchers found that the risk of non-allergic asthma in children increased by
59 percent if their fathers were exposed to secondhand smoke in their childhood, compared to children whose fathers were not exposed.

If the fathers were exposed to secondhand smoke and went on to smoke themselves, the risk for their children to have asthma was even higher at 72 percent.

“Just launched billboards in 7 of the most restrictive anti-abortion states that explain how women can access care–no matter where they live,” Newsom said in a tweet. “To any woman seeking an abortion in these anti-freedom states: CA will defend your right to make decisions about your own health.”

Health reforms both parties should endorse

That’s it for today, thanks for reading. Check out The Hill’s Health Care page for the latest news and coverage. See you next week.