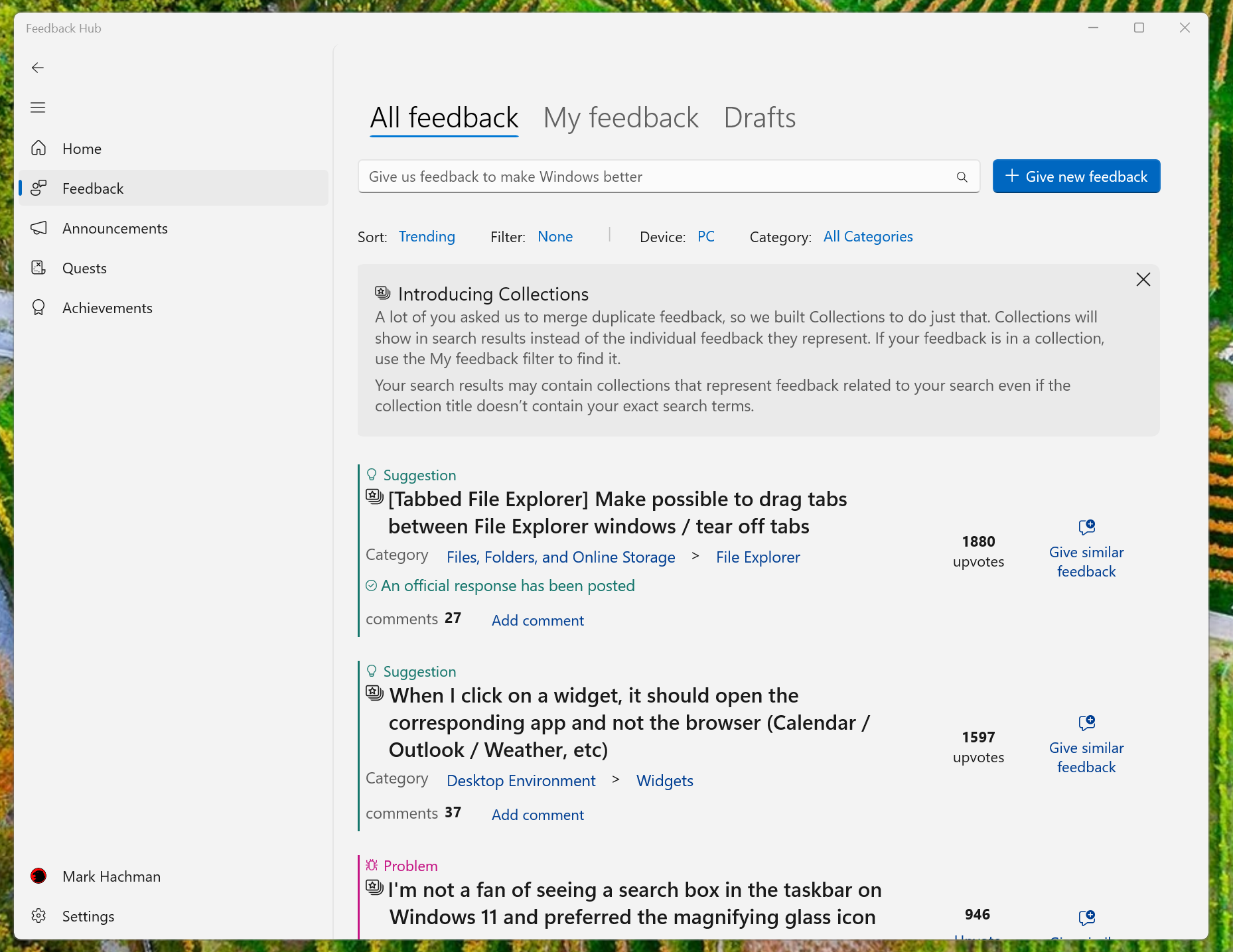 Whether you celebrate Festivus or not, you can air your grievances about Windows today — or any day — via the Windows Feedback Hub.

The Windows Feedback Hub is an app within Windows 10 and Windows 11. It’s like a suggestion box: you can tell Microsoft what’s wrong (or right) about Windows 10 or 11, suggest new features, alert developers of bugs, and so on. It’s a direct line to Microsoft, even if they might not directly (or quickly) respond to your feedback.

The Feedback Hub is a more powerful version of the ballot box. Not only can you suggest your own improvements, but you can find other suggestions or complaints and upvote them too. If there’s a critical mass of feedback on a given issue, Microsoft has to take care of it, right?

How to use the Windows Feedback Hub

First, make sure that you’re signed into your Microsoft account on a Windows machine. To open the Feedback Hub, press the Windows key and type Feedback Hub in the box.

Feedback Hub opens onto the Home screen, which really could use a visual redesign after several years of existence. There are two prominent buttons: “Report a problem” and “Suggest a feature.” The page will also report other elements of your participation with the Windows community, including whether you’re part of the Insider program. One handy feature is a list of recent announcements by the Windows team, announcing new features (generally to Insiders) as well as any new Insider builds.

Both of the “Report” and “Suggest” buttons lead to a similar screen, where you can “Summarize your feedback” with a summary headline, then dive into more detail if you wish. Don’t forget to continue to the entries following it, either, including the choice of a “category.”

It’s these smaller categories that specify which feature or app or section within Windows that your complaint or suggestion is addressing. As you might imagine, suggestions/complaints about specific topics will be routed to the teams responsible for those parts of Windows.

Remember, too, that you’re making a public declaration to Microsoft. If you’re signed in, Microsoft will see your name and so will others. Don’t be childish and simply complain that “this thing sucks!” — not only is it not helpful, but it will likely be dismissed outright.

Naturally, you might not be the first to have this particular complaint or suggestion. Microsoft then directs you to “find similar feedback,” which presumably groups your feedback alongside it.

Finally, you have the option of sending a screenshot or screen recording to support your request or document a bug. For the latter, you can ask Microsoft to send along diagnostic information (if you opt in) to help find the underlying causes of the bug.

While the other headings in the left-hand navigation bar can be useful (though Microsoft doesn’t appear to have kept its Achievements up to date), the Feedback listing is worth checking out. Here, you’ll see what other Windows users think needs to be fixed, from both a top-down perspective as well as a category view. You’re welcome to upvote and comment underneath any request. Microsoft will also occasionally append a note on whether they’ve addressed the issue or not.

Longtime users may complain that Microsoft doesn’t respond to feedback as quickly as they used to. And sometimes it feels more satisfactory to vent on Twitter, Facebook, or even YouTube. But if you ever want to complain about Windows or provide a helpful suggestion, open the Feedback Hub! That’s the place to do it.