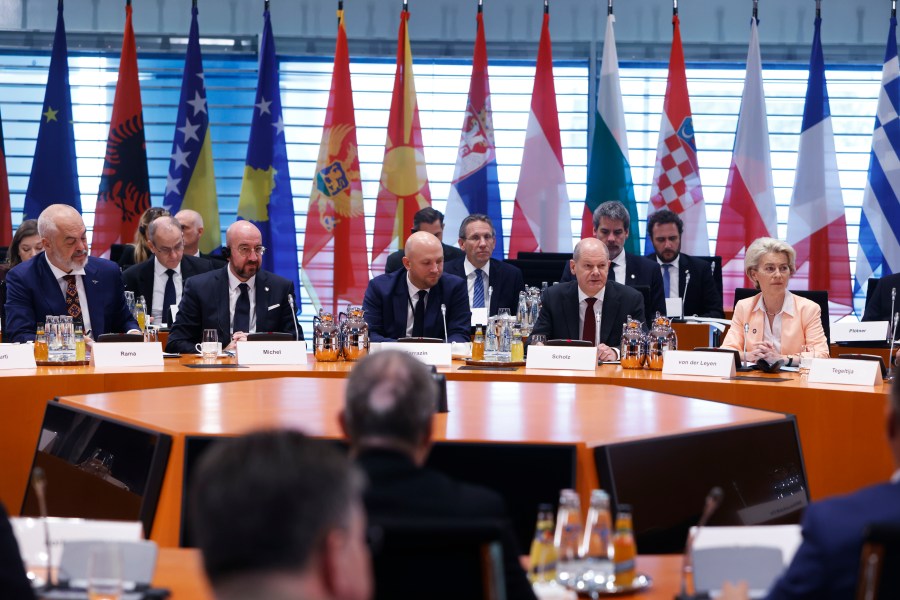 BERLIN (AP) — German Chancellor Olaf Scholz on Thursday told leaders of six Balkan countries that aspire to join the European Union that “it is high time to overcome regional conflicts” and stand together as Russia wages war in Ukraine.

Scholz and the European Union’s top officials joined leaders from Serbia, Kosovo, Bosnia, Montenegro, North Macedonia and Albania for a meeting at which they are expected to sign agreements on easing regional travel arrangements and mutual recognition of academic qualifications. They are also expected to discuss energy issues.

Scholz highlighted the need to deliver on the countries’ longstanding desire to join the EU, which he said “is in our interest.”

But, with tension brewing again between Serbia and Kosovo this week, he said that the nations themselves need to overcome problems that have slowed their path to the EU and pointed to “a sense of urgency.”

“Russia’s brutal war of aggression against Ukraine forces us to stand together to preserve Europe’s freedom and security,” Scholz said. “It is high time to overcome regional conflicts that have continued for far too long — conflicts that divide you and hold your countries back on your European path.”

“The normalization process between Serbia and Kosovo in particular must speed up, so let’s get it done,” he added. Serbia doesn’t recognize its former province’s 2008 declaration of independence.

Alongside regional reconciliation and cooperation, “the challenges of irregular migration, corruption and organized crime are crucial issues for all of us,” Scholz said, adding that the Balkan countries’ commitment to align visa policies with those of the EU is “essential in this context.”

Germany and others have been pushing Serbia in particular to tighten its entry policies as an increasing number of migrants have tried to reach wealthier western European countries via the Balkans in recent months.