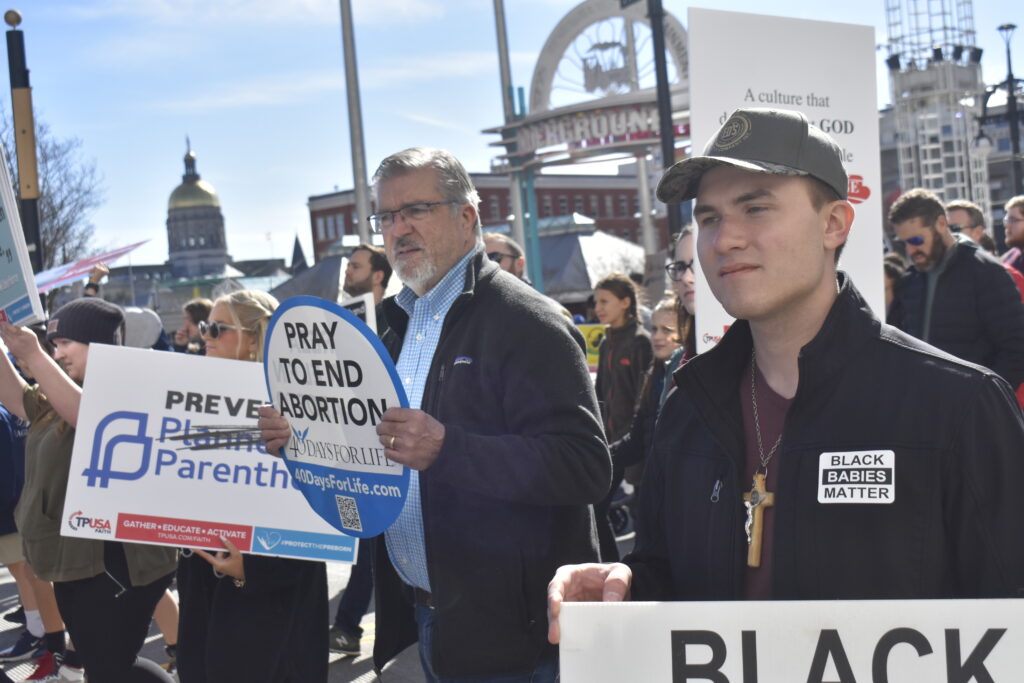 Sunday marks the 50th anniversary of the Roe v. Wade decision, the Supreme Court case guaranteeing the right to an abortion that was overturned last year.

Since the landmark ruling fell last summer, Georgia’s six-week abortion ban has been on and off and now back on as a legal challenge moves its way through the courts.

“It’s been really devastating. There has been a lot of rage, a lot of sadness, a lot of grief specifically,” Kristen Baker with the Feminist Women’s Health Center, an Atlanta clinic that has offered abortion services since the 1970s, said during a virtual discussion Saturday organized by the Amplify Georgia Collaborative. 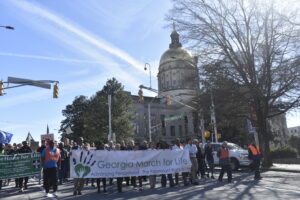 While abortion rights advocates mourn the loss of federal protections and chart a way forward in a post-Roe world, some abortion opponents marked the anniversary by pressing for more restrictions at a gathering near the state Capitol.

Georgia now forbids most abortions after six weeks of pregnancy, earlier than many women even think to buy a pregnancy test. When the measure passed in 2019, Georgia Republicans boasted it was the strictest law in the country. Other states have since passed stricter laws than Georgia’s.

For people like Daphne Harris Nicely, executive director of the Atlanta Morning Center, an anti-abortion pregnancy center, that means embryonic people are being murdered every day.

“Those who fought solely for the overturning of Roe v. Wade, you got what you asked for,” she told a crowd of several hundred Friday at the Georgia March for Life Memorial Service Rally. “There’s still a lot of work to be done. We need the personhood, the humanity, the dignity of the life of that child to be recognized, the intrinsic value of that life.”

Woodstock Republican Rep. Charlice Byrd said that’s what she hopes to accomplish with a new bill in the 2023 legislative session.

“I will propose an amendment to the Constitution of the state of Georgia that this state shall recognize the paramount right to life of all human beings as persons at any stage of development,” she told the crowd. “A resolution will go out for you to vote on that, that all life matters.” 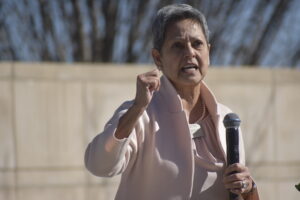 In addition to the six-week cutoff, Georgia doctors can provide abortions if the woman’s health is at risk, if the pregnancy is not viable or in cases of rape or incest in which a police report has been filed. Byrd said her bill would eliminate those three exceptions.

“We have those exceptions right now, the three, but I want to eliminate those three. It is total pro-life,” she said.

Passing such a bill would not be an easy task. A constitutional amendment requires two-thirds majorities from both chambers. The state’s 2019 abortion law passed the House with one vote to spare on a simple majority, and Democrats have gained ground in the chamber since then, though Republicans still control the Legislature.

A change in the state constitution would also need to be approved by a majority of voters, and a poll released in October found nearly two-thirds of Georgians opposed to the current abortion law.

“I think the posture that the House should be in – and certainly the posture Jon Burns is in – is we’re going to wait and see exactly what becomes of the legislation we passed,” Burns said. 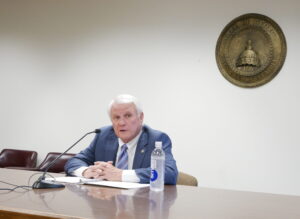 “We’re going to hear from the state Supreme Court, and then we’ll move forward on something if we need to. If not, we certainly have something in place.”

The state’s high court is set to hear arguments in late March, while the deadline for bills to smoothly cross from one chamber to the other this year is March 6.

Speaking to reporters at the rally, Byrd said she was not fazed by Burns’ wait-and-see posture.

“It is still my right to be able to carry legislation at any time that I want,” she said. “I mean, he can easily tell me no, but there’s a whole lot of people out here that want this to happen. They want a pro-life amendment. So we can have that conversation and dialogue with Speaker Burns, not today, but certainly in the coming days while we’re in session.”

Leading the protesters in prayer before a silent march around downtown Atlanta, Nathaniel Darnell, who is the Georgia director for the National Federation of Republican Assemblies, grimly suggested God has ways of dealing with lawmakers who do not advance his preferred total abortion ban legislation.

“May you protect those that would protect life. Lord, may you please confront those legislators who might seek to be an obstacle to these efforts. We thank you for how you have relieved us from one legislator, a speaker who made himself an obstacle, and we pray that, Father, you would help other legislators to serve you in fear, to take warning.”

Former House Speaker David Ralston, a Blue Ridge Republican who was a revered state leader, died in November after an extended illness. He was 68.

While the state’s staunchest anti-abortion advocates rallied at the state Capitol for stricter limits, abortion rights advocates recognized the anniversary by rallying people to channel their frustration into action.

“We know that there’s always a lot of work to do to push back against the things that are unraveling here to make sure that they unravel less here in Georgia,” Roula AbiSamra, state campaign director with Amplify Georgia, said during Saturday’s virtual discussion. “And at the same time, we’ve got to continue weaving, building for much better than the status quo.” 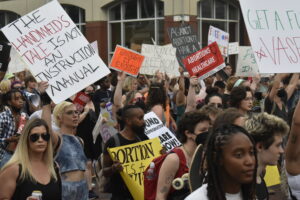 Rep. Shea Roberts, an Atlanta Democrat, said a bill will be filed this week that would protect abortion access in Georgia, though she acknowledged it’s unlikely to receive a hearing in the GOP-controlled General Assembly.

“What we plan to do in the future is obviously to continue to get in their face every opportunity we have to let them know that Georgians who support absolute access to all health care, including abortion care, are not going away – that we expect our freedom, we deserve our freedom and that we are going to stay in front of them,” Roberts said.

Roberts said she remains hopeful the state Supreme Court will toss out Georgia’s abortion law since it passed before Roe v. Wade was overturned, which a Fulton County judge ruled makes the law “plainly unconstitutional.”

That would throw the issue back to lawmakers to decide whether to try again when the 2019 measure barely cleared the House, which now has a slightly smaller GOP majority and dozens of new lawmakers.

State Rep. Karen Lupton, a freshly sworn-in Democrat from Chamblee, said reproductive freedom was a major concern for voters in her district, including men, during her campaign.

“We’re fighting an uphill battle, but we are ready to do it – mitigate the bad stuff and stand in the way of even worse,” Lupton said.