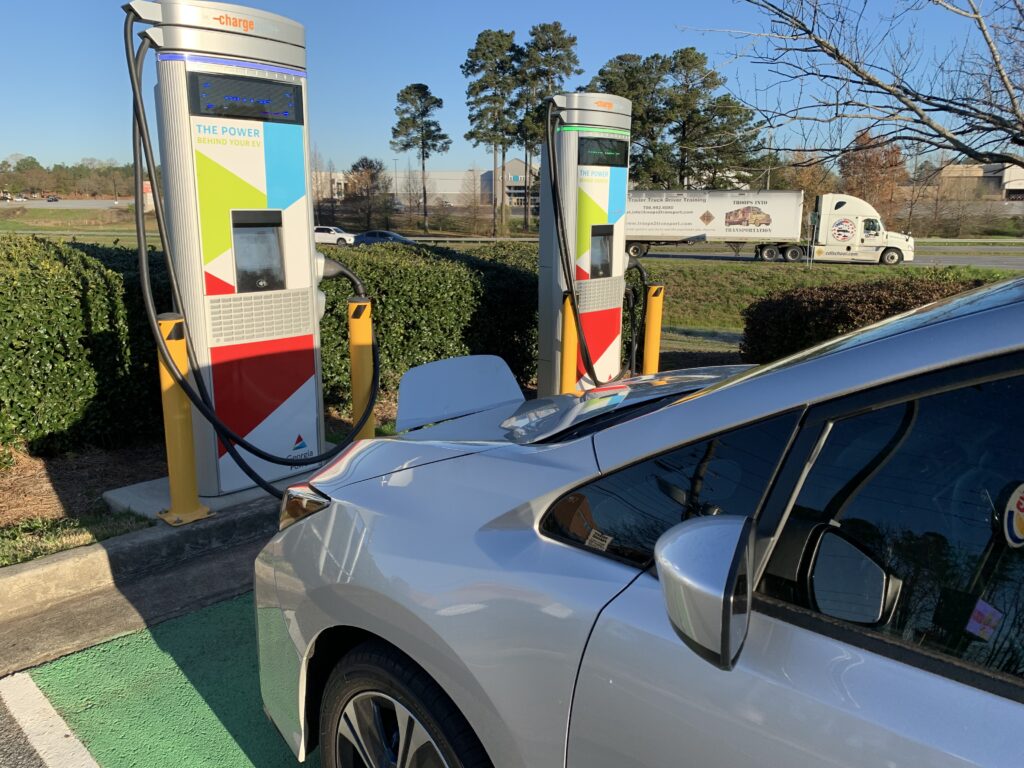 An electric vehicle charges up at a Georgia Power station located in the parking lot of a Burger King in Columbus. Jill Nolin/Georgia Recorder

Hundreds of millions of dollars are at stake for the state’s future embrace of electric vehicles going into the new legislative session in January as Georgia pursues ways to boost the economy through a growing green industry.

The Georgia Public Service Commission this week approved a plan for Georgia Power to spend a total of $53 million over the next three years for the Make Ready program that helps businesses provide charging points for electric vehicle drivers. As part of a federal bipartisan infrastructure law passed in 2021, the state will also receive $135 million to develop its own portion of the national network.

On Tuesday the PSC staff and Georgia Power reached an agreement to set aside 65% of the utility company’s earlier $81 million proposed for the Make Ready program over the next several years. That compromise was struck after state regulators pushed back on the utility’s initial plans to more steeply hike rates charged to consumers. The new plan also allows auto dealers to participate.

A joint state House and Senate study committee also recently released a slate of recommendations meant to help the state adapt to the electrification of transportation. Disagreements between the industry and utility companies on how to collaborate in the development of infrastructure supporting electric vehicles have been the most contentious part of the process, according to the joint study committee.

Over the last decade, plug-in electric car sales have grown in Georgia and across the U.S., with infrastructure development taking place mostly in large metropolitan areas such as Atlanta. Yet, Georgia’s rural areas could also benefit from new jobs created by factories such as Rivian’s billion-dollar electric truck manufacturing facility.

Georgia Public Service Commissioner Tim Echols, who often posts photos of himself with electric vehicles on social media, said that restoring a significant portion of the funding for the EV program is essential since it will expand access and help smaller communities.

The legislative study committee failed to reach a consensus, though, on the roles that Georgia Power and electric membership cooperatives should play in providing the infrastructure needed to charge electric vehicles.

Republican Rep. Alan Powell of Hartwell said that he has heard concerns from Georgia residents about having Georgia Power or a subsidiary competing with the retail businesses when it comes to selling electricity to charge EVs. In his remarks, he said he has his own apprehension about letting Georgia Power have the ability to pass those costs along to residential customers.

Sen. David Lucas, a Macon Democrat, opposed putting a restriction on a power company to provide power to an electric vehicle station and was upset that a deal between utilities and private enterprises wasn’t reached.

“The problem is what do you do when people are traveling in rural Georgia? If nobody comes in to do it then the power (company) entirely has the resources to go and put one in those communities where they aren’t served,” Lucas said.

Perry Republican Sen. Larry Walker said he is reluctant to restrict the development of charging stations at this early stage.

“I do understand that private business owners need some certainty and if they’re gonna make a big investment in charging stations, they don’t want to do that and then in the next few months or a year or whatever, have the public utility come next door to them and undercut them,” Walker said.

Rather than charging by the time it takes to recharge, the study committee suggests having convenience stores and other retailers charge by the kilowatt hour.

“Make Ready has already been used to enable charger locations near the Port of Savannah and along key routes to the Atlanta airport, and it’s already proven essential to incentivize the deployment of transformational EV charging technology,” Echols said at Tuesday’s rate case hearing.

In addition, the Georgia Department of Transportation plans to use federal funding to improve EV charging access in rural areas. A fast charging station will be built every 50 miles along U.S. 82 between Albany and Brunswick and along U.S. 441 between Dublin and Cornelia as part of the agency’s plans.

These new stations will be built through public-private partnerships, so the state will not own, operate or maintain them. A competitive solicitation process will be used to find private partners.

Currently, about a dozen stations meet the standards along those corridors. Another 30 or more stations need to be built or upgraded.

“GDOT will fulfill its obligation, under federal law, to act as a niche investor in the buildout of a national infrastructure network to enable EV charging where there is clear consumer demand yet also limited private sector interest to invest without the availability of publicly funded subsidy,” the transportation department’s deployment plan states.

The post Georgia officials gear up for state rollout of plug-in network to deliver juice to electric vehicles appeared first on Georgia Recorder.